The Turkish president's willingness to put practicality ahead of pettiness in international relations might be driven solely by his survival instincts, but it is desperately needed. 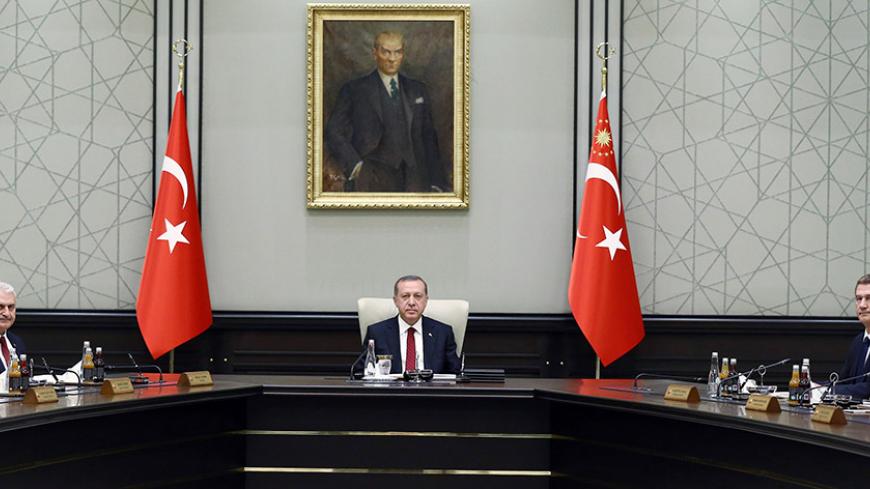 Turkish President Recep Tayyip Erdogan chairs the meeting of the 65th Cabinet of Turkey at the Presidential Complex in Ankara, Turkey, May 25, 2016. - KAYHAN OZER/AFP/Getty Images

The motivation behind Turkish President Recep Tayyip Erdogan's recent gestures of reconciliation toward other countries in the region is questionable, but there's no doubt the moves had to be made.

New York Times reporter Sabrina Tavernise wrote in her July 5 piece titled "Turkish Leader Erdogan Making New Enemies and Frustrating Old Friends" that Erdogan "had grown so alone that this past week he moved to make peace deals with Russia over [a] jet's downing and with Israel over its killing of several Turkish activists on a Gaza-bound flotilla in 2010." She quoted me on the subject: "I think this is an indicator of how desperate they are."

Whatever the reasons behind the latest Turkish actions, the steps were essential. They will contribute to Erdogan's political survival and demonstrate the approach not of an ideological zealot but of a political pragmatist, and should be seen as an asset for any political operator.

After Turkey's moves to reconcile with Russia and Israel, there are now signs of similar intentions with Egypt and even Syria. Saban Disli, deputy chairman of the ruling Justice and Development Party, hinted that Turkey may be planning to restore relations with both countries.

It is an open secret that Saudi Arabia has been mediating between Ankara and Cairo for a while, and there's been a rumor for some time that Algeria is acting as an intermediary between Ankara and Damascus. Since a new page opened with Russia following Erdogan's apology to Russian President Vladimir Putin, Moscow also has become a mediator between Syria and Turkey, whose animosity for each other has been seemingly irreconcilable since the autumn of 2011.

A sharp turn in relations with Russia and Israel made many people in Turkey think that the reconciliation with Egypt and Syria may be quite possible, given Erdogan's pragmatism and flexibility.

But the question remains: Is the shift in Turkish foreign policy — even if it is a consequence of desperation — merely a temporary change in attitude with no chance of sustainability, or is it a complete overhaul that suggests Turkey is navigating in a new direction?

The answers to these questions are diametrically opposed to each other, although the answer share a common dynamic: Even the ostensible reconciliation achieved with Israel and Russia are far from being done deals of cooperation and regained friendship. Moreover, there are formidable obstacles in the way of smooth relationships with both.

The prospect of reconciliation with Russia is quite attractive to Turkey, with significant potential benefits. And Ankara's apology to Moscow promises to alleviate some tension. But the two sides are still short of a true reconciliation.

Aurel Braun, a professor of international relations and a center associate at the Davis Center for Russian and Eurasian Studies at Harvard University, underlined the following, "Erdogan is very likely acting tactically now, and should he manage to stabilize and solidify his position domestically, he could quickly alter relations with Russia. Consequently, it would be wise of all international actors, including Russia, when dealing with Erdogan to recognize the multiple negative variables involved, whether it is the inherent instability of the Erdogan regime or the unpredictable and cynical character of the Turkish leader himself, to exercise extreme caution in improving relations and to insist at all stages on clearly defined quid pro quos."

It seems that's what the Russians intend to do.

A sustainable reconciliation with Israel is even more uncertain. Although the deal improved Israeli Prime Minister Benjamin Netanyahu's domestic standing, plenty of observers have pointed out potentially fatal flaws in the deal.

One such observer is Michael Koplow, policy director at the Israel Policy Forum. In his Foreign Affairs article, "Terrorism and Turkey's Deal With Israel — Will Cooperation Work?" he raised doubts about Turkey's fulfillment of its commitments to Israel, indicating that they are bound to run up against the limits of Turkish domestic politics and regional influence. For Koplow, the most striking flaw of the deal is that it depends on continued quiet in Gaza, which looks unlikely. "Although no one can predict with certainty when another war in Gaza will break out, another round of fighting seems inevitable, and with it will come the end of the current Israeli-Turkish detente."

One has to also consider that Egypt would like to see Turkey championing Palestinian rights in Gaza and thus may not easily acquiesce to Turkey taking a leading role in the eastern Mediterranean.

For Israel, closer relations with Egypt take precedence over those with Turkey. That geopolitical element hints at the difficulties awaiting the improvement of Turkish-Egyptian relations.

The most important aspect of the new radical shift in Turkish foreign policy is that it did not take place from a position of strength. It is not the outcome of a well-studied and conceptualized approach.

On the contrary, it comes from a position of weakness and has to do with Erdogan's survival instinct. The objects of Turkey's advances are well aware of this fact.