The politicization of Syria's soap operas

As Syrian drama series gain popularity in the Arab world, the Syrian regime seeks to promote its vision through these series produced inside the Syrian territory. 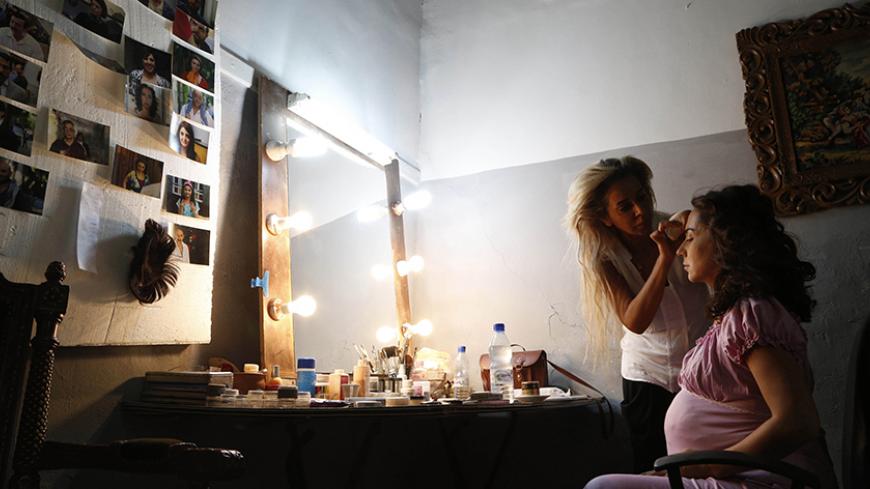 An actress has her makeup applied before the filming of a scene in an episode of the Syrian TV series "Al-Haqaeb — Dhubou al-Shanatee" ("Baggage — Pack Your Bags"), directed by Al-Laith Hajjo, at the set location in old Damascus, July 6, 2014. The TV series focuses on the life of a family living through the Syrian civil war. - REUTERS/Omar Sanadiki

Over the past 10 years, Syrian drama series have been very popular in the Arab world and have even taken the lead among Arab series, Syrian Information Minister Omran al-Zoubi said during a meeting with South American actress Carla Ortiz May 20 in Damascus.

Syrian series have been getting high ratings on Arab channels, especially those that address Damascus and Syrian history, such as the series “Bab al-Hara,” which started in 2006 and is in its eight season. Although Syrians have widely criticized the series and said it distorts Syrian history, the series continues to be the most popular in the Arab world.

When the Syrian revolution broke out in March 2011, several Syrian actors, as well as other people from all social categories — such as doctors, artists and even the unemployed — rushed to join the revolution. As a result, several actors were arrested, while others were forbidden from acting. For its part, the Syrian Artists’ Syndicate, which is affiliated with the Syrian regime, dismissed hundreds of artists who denounced and opposed the practices of the regime.

Syrian actress Sawsan Arsheed told Al-Monitor via Skype from Paris, “The regime labeled us as opponents just because we supported calls for freedom and equality. I do not have any political orientation, but I act in accordance with the principles of humanity and justice. We know that the people expect us to say what is right about the arrests and killing of the people. We were labeled as traitors and enemies of the country. We faced incitement campaigns and we lost our presence in our own country just because we uttered the right word facing the regime. Our loss, however, is nothing compared to the Syrians who lost their lives and their children.”

Arsheed went on to talk about the Syrian drama reality. “The Syrian drama is now governed by so many red lines that serve the regime, and it only has a very small margin of freedom. It is dealing with what is happening in the country based on the regime’s version. It covers vague stories that reflect the denial or partial recognition of the other party, knowing that such vagueness only results from security dictates. I cannot work under the authority of the regime because the latter would be dictating my words.”

Arsheed concluded her interview with Al-Monitor by saying that she hopes to participate in films that truly depict what is happening in Syria. “The tragedy plaguing the country is too big to be filmed in any series.”

There have been dozens of various Syrian series either produced in Syria or in Arab countries that have led to diverse perceptions of what is happening in Syria.

Syrian actor and theatrical director Maher Sleibi told Al-Monitor from the United Arab Emirates via Skype, “There are two types of drama. The first, which is very rare, is produced outside of Syria and has tried to be neutral for marketing purposes. Some cadres who left the country tried to work on portraying what is happening in Syria, but most of these works do not sell. The other type of drama is produced inside Syria based on the whims of the Syrian regime, which wanted to show that life is normal and sought the production of love stories, sexual relationships and college life away from Syria's pain.”

Sleibi confirmed the good quality of the Syrian artistic cadres who have achieved significant works over the past years.

He added, “Some of these cadres are still working in Syria, while others left Syria and went to [other parts of] the Arab world. Some artists are trying to find their place in the field, sometimes at the expense or their ideology or position as they cannot return to their homeland due to their political views.”

Sleibi said that as soon as the Syrian tragedy is over, the Syrian issue will be of great significance and a lot of stories and scenarios will be focusing on Syrian daily life and will be stronger as a result of the experience that Syria went through.

Syrian soap operas produced in Syria have been mostly pro-regime as they were filmed under the Syrian security apparatus’ control. These have distorted the image of the opposition, written off moderate opposition and shown that those against the regime are armed people and radical Islamists. According to these soap operas, what is taking place in the country falls under the category of sabotage, and this is a message that has been conveyed to supporters of the Bashar al-Assad regime.

Syrian director Abdulrahman Dandashi, who works in foreign production companies, told Al-Monitor in Istanbul, “The Syrian drama is no longer governed by any party. It is only working to widen the gap between the parties to the conflict as it denies the reality and offers extreme examples of both sides of the conflict. The Syrian drama has evolved in terms of quality due to the use of modern cameras and equipment, but as far as the artistic quality is concerned, there has been a decline due to the superficial approach of topics. Before the revolution, Syrian drama was more mature as it would deal with subjects close to reality, but following the revolution, it became poorer as it headed toward the marketing of a clear pro-regime political vision. A large number of artists left the country, thus creating an artistic loophole that was filled by people who do not have enough experience.”

The Syrian revolution has affected all aspects of political, social and artistic life, and this has been reflected on television screens in a systematic framework showing certain orientations of the Syrian regime. The Syrian opposition has no formal artistic work that can broadcast its ideology and goals or promote it in the media.