As the Syrian regime forces have receded from Syrian Kurdistan, Rojava’s artistic scene has been blooming, with Kurdish artists leading a popular revival of Kurdish folklore and history. 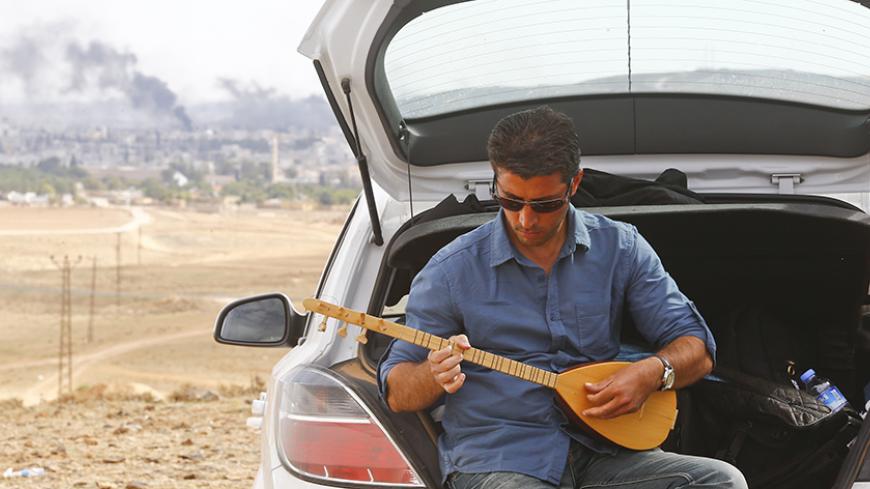 A Turkish Kurd plays the sitar as smoke rises from the Syrian town of Kobani, as seen from the Mursitpinar crossing on the Turkish-Syrian border in Sanliurfa province, Oct. 26, 2014. - REUTERS/Kai Pfaffenbach

DARBASIYAH, Syria — The Syrian revolution has given rise to an unprecedented phenomenon within the Syrian artistic scene. The political schism also affected Syrian artists, dividing them between regime supporters and dissidents amid the ongoing popular movement in both its peaceful and military forms.

Many Syrian actors including Yara Sabri, Abdul-Hakim Kutaifan and Mohammad al-Rashi expressed their opposition to President Bashar al-Assad. Rashi took part in the early protests staged by Syrian youths in Damascus’ al-Qabun neighborhood in December 2011. When Rashi chanted, “Long live Syria, down with Bashar al-Assad,” the Syrian regime and its supporters took it as an expression of the demands of Syrian intellectuals and artists.

Syrian Kurdistan, also referred to as Rojava, has seen the rise of a generation of young anti-regime artists and singers who became adults at the height of the Syrian revolution. They sing for the revolution on stage or during popular celebrations like Nowruz.

Biman Khalaf, 25, born to a Kurdish father and an Arab mother, told Al-Monitor, “I started singing at the age of 12 and joined Kurdish folkloric bands in our region. Despite our community’s negative perception of a young girl who goes out alone and sings on popular stages and during national celebrations, my neighbors and cousins had a different view. I have also had to deal with other challenges, which came in the form of security pursuits by the regime, as Kurds were banned from celebrating their folklore.”

“After the revolution started, … I was given more freedom. My mother’s family especially showed great support and my siblings now encourage me more than ever. I feel that we can finally spread our wings, especially after the regime forces left our regions in northern and northwestern Syria, which are now part of Rojava,” Khalaf said.

After that, the artistic scene saw the rise of Kurdish bands formed by PKK fighters in the mountainous region. Awaze Ciya is one of them. All of its members are fighters who sing for the revolution.

Salman Ibrahim, a co-director of Rojava's Center of Art and Democratic Culture in al-Jazeera canton, told Al-Monitor, “Under the rule of the Assad regime, we worked privately among the people, as Kurds faced pressure and crackdowns by the regime. We weren’t allowed to exhibit our talents, especially if they carry anti-regime messages. We would sing and celebrate the revolution in private and in places away from the eyes of regime informants. Popular and folkloric songs helped us to preserve our spoken language, which the regime forbade us from using.”

He said, “Examples of Kurdish fighters who hold a weapon in one hand and a musical instrument in the other can also be found in the Kurdistan mountains, where PKK members opposed to the Turkish state live. As a result, musical bands were formed to celebrate the revolution. Many revolutionary artists died in battle like Shahit Sarhad, who became the singer of the revolution.”

Ibrahim added, “Five years into the Syrian revolution, artists now have the support of the Kurdish administration in Rojava, the safest area in Syria. The amount of freedom we have allowed us to express ourselves and our solidarity with our Kurdish fighters, especially the women, who are now considered the face of the revolution.”

Revolutionary art has also been revived in Rojava with the formation of popular theaters in many cities and villages. They celebrate the Kurdish folklore that was banned in Syria as well as in parts of Kurdistan.

Despite losing his sight due to an illness, musician Nouri Kazem plays the tanbur, a Kurdish folkloric instrument. He told Al-Monitor, “I started performing at a young age in weddings. Now I make a living out of music, which also comforts me. The revolution had a significant impact on us. As an artist, I have always been a supporter of the revolution in Rojava through my music, defending the Kurdish dream of living peacefully in our country, Syria, where we weren’t allowed to speak to each other in our native tongue during the regime’s era.”

Art has always played a significant role in the Kurds' lives. They sing Kurdish epics and songs in celebration of heroic deeds by the many leaders who fought during Kurdish revolutions, such as Ihsan Nuri, the leader of the Agri revolution in Turkey in 1925, and many others who died fighting for freedom like Mashaal Tammo, a leading Kurdish opposition figure in the Syrian revolution.