Speculating about Saudi royal succession can result in confusion — and jail time. 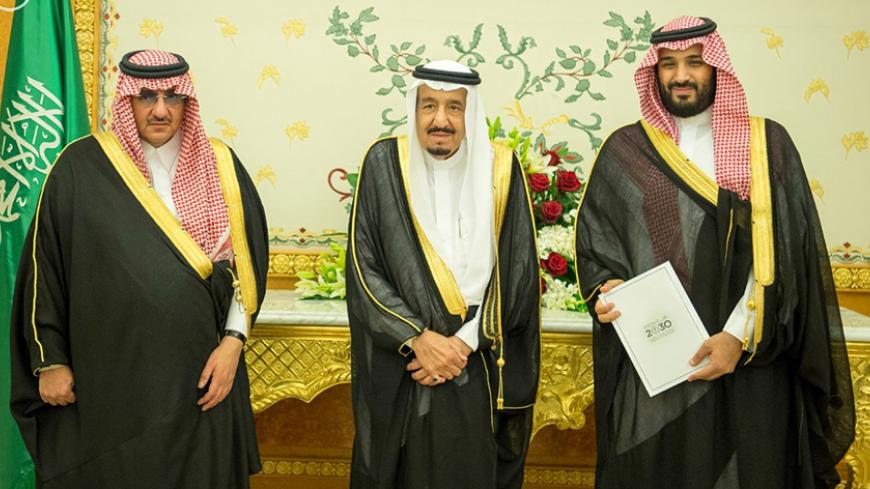 Saudi King Salman bin Abdul-Aziz Al Saud is currently presiding over two hawkish princes he appointed in 2015 to run the kingdom. Since then, many observers have tried to pierce a hole in the iron curtain drawn around Saudi royal succession and rivalries to understand or at least predict the logic of royal succession and the potential competition it generates.

The alleged rivalry is fueling a lot of speculation.

Saudi succession to the throne is a mystical affair, a prerogative of the king, with only an inner circle of princes and confidants privy to its intrigues. Moreover, while Mohammed has achieved great visibility thanks to his erratic war in Yemen, regular visits to the United States and Europe and economic plan Vision 2030, his cousin Nayef, who is in charge of the kingdom's internal security, is truly the Saudi deep state.

Only a foolish junior prince would try to penetrate this deep state, now an empire of intelligence services, police agencies and emergency forces, in addition to a vast number of civil servants, judges, prison officials and Wahhabi loyalist clerics. Perhaps only serious ill health or the death of its master can shift the deep state. Nayef will only abandon that hidden empire when he becomes king. As he has no sons to inherit the job, he would soon have to groom a replacement minister.

Saudis are rather stoic about the issue of royal succession. They have always been spectators of a royal drama that is suddenly broadcasted without prior notice or alerts. After the death of every king, they are summoned to swear the oath of allegiance, baya, according to God's law. Royal doors are open to clerics, nobility and commoners to come and swear that they are obedient to whoever happens to be the new king.

So in January 2015, Salman was no exception and he immediately received the allegiance of the crowds. But his two promoted princes also expected people to flock to their palaces to announce their submission. Today, Saudis are not only meant to swear allegiance to the king, but to a number of other senior princes, a novelty even in the theology of the Wahhabi loyalists who are dominant among Saudi higher clerics.

Saudis are meant to rush to offer their allegiance as quickly as possible, lest someone dies before swearing the oath. If that happens, the person will then die a miserable death, without "the rope of the oath to submit to a legitimate ruler firmly tied around his neck," dubbed a jahiliyya death. No matter how unjust a ruler is, it is better to rush and give him the oath. If he is a thief or abuser who lashes people without reason, you are under obligation to submit and never challenge him.

All that relies on disputed sayings of the Prophet Muhammad, but there is no scope for challenge or debate. In Saudi Arabia, loyalist Wahhabis propagate the obligation in support of the political establishment that continues to nourish them and pay their salaries. While most of them have strong connections to Nayef as preachers, judges, educators and religious police, they got seriously upset — and probably felt a little less than loyal — when the king limited their powers. Salman recently forbade the religious police to arrest people for violating morality. This edict has not been so successful, though, as they recently arrested men with dubious haircuts in Mecca for having "bad, un-Islamic hair."

For those who cannot rush to the royal palace for the oath, modern technology provides a solution. There is always an electronic baya and an active Twitter hashtag. You simply register your oath by contributing a line or two of good words and abundant supplications to keep the guardians of the Muslim community in good health and prosperity. When Salman became king, some teachers erected cardboard models of him with a hole around his hand so children could insert their little palms to shake hands and display their allegiance. So modern imagination is juxtaposed on an ancient tradition to enlist very young kids and train them in the art of voluntary submission — some would say servitude.

No one wants to be the last to know about succession developments. To protect themselves from being in such a position, Saudis have adopted a rather interesting discourse, saying that those who know the secrets of succession don't talk, and those who talk don't know. This is an ingenious way out and a justification for their disenfranchisement, marginalization and redundancy. If ever they comment on succession or royal rivalries to foreign correspondents, they remain "anonymous sources."

They are not to be blamed. A Saudi who speculates publicly about the imminent death of the king or the ill health of a senior prince can be jailed. Foreign correspondents who speculate are given 48 hours to get out of the country. Nevertheless, inside Saudi Arabia, speculation about royal succession has never stopped in private conversations.

There were so-called rational ways introduced to deal with the unpredictability of Saudi succession. King Fahd, who died in 2005, introduced the Basic Law of Governance in 1992, a sort of co-constitution to be used alongside the Quran, which is considered the Saudi constitution. He consolidated the right of the house of Saud to rule and stipulated that the best and the most senior should become king. But "the best" is rather ambiguous and often involves both marginalizing senior princes and bringing others to the inner circle of power. Seniority is equally ambiguous, with princes expected to interpret it not as the eldest, but as "aslah," most qualified, for the job.

This ambiguity has left many disgruntled senior princes without a portfolio. In 2007, King Abdullah invented the Allegiance Committee, consisting of 33 senior princes, to elect a future king. He appointed Salman as crown prince and also invented the post of deputy crown prince. However, he kept changing his mind about who should fill the latter position until he settled on Prince Muqrin as deputy crown prince in the last years of his reign. The king expected the princes to respect his royal orders. But when Salman became king, he immediately jumped on the opportunity to dismiss Muqrin and bring two younger princes to power, thus excluding his own remaining brothers, nephews and his other sons.

What conclusions do we draw from this pattern? Saudi succession defies any rule and does not follow any common pattern. The future king cannot be predicted based on seniority or other presumably reliable principles. The king basically sets the rule and he can do this with complete disregard for all the written texts and committees already in place to deal with succession. So, as long as Salman is alive, he will remain the first and final arbiter of Saudi internal politics, including the urgent issue of "the two Mohammeds," as the two most senior princes came to be known after they were appointed.

The stakes are too high for the princes to contest each other in public. There is a sort of modus operandi between the two contestants. The king remains the final arbiter. The two princes will not challenge each other openly because this would shake the house of Saud and could eventually lead to their demise. So, in the meantime, the iron curtain remains firmly drawn, while both Saudis and outside observers rush to interpret and speculate on the basis of very limited information, most of which is unattributed.