Is new strategy needed for fighting IS in Syria?

In an interview with Al-Monitor, a senior member of the New Syrian Army, Abdulsalam Muzil, talks about his force’s achievements and what's to come in the battle against the Islamic State. 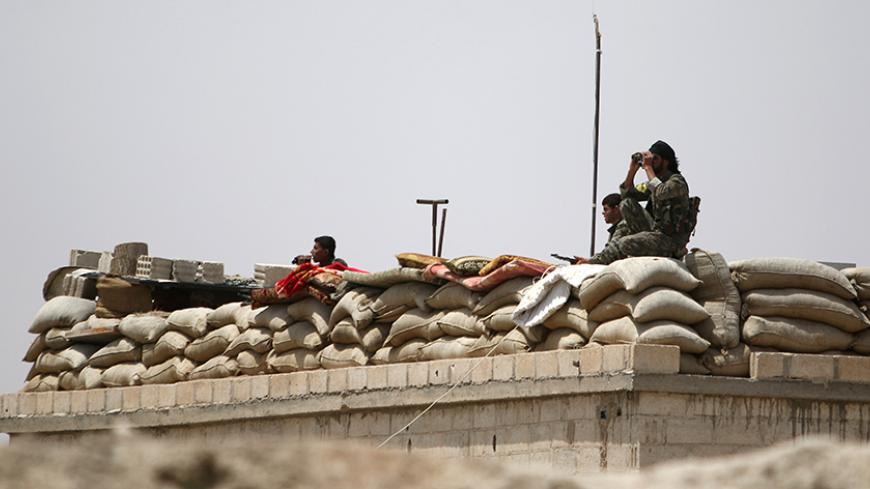 Fighters of the Syria Democratic Forces take an overwatch position in the northern province of Raqqa, Syria, May 27, 2016. - REUTERS/Rodi Said

In September 2015, an announcement was made about the formation of the New Syrian Army (NSA), which would initially begin its operations by fighting the Islamic State (IS), without any mention about it possibly confronting Bashar al-Assad’s forces. This is despite the fact that the NSA commander, Khazal al-Sarhan, told various media outlets that Assad and IS were but two sides of the same coin, and that his army would fight Assad once IS is defeated.

As part of the US Pentagon’s plan to combat IS, the NSA was supplied with arms and logistical support through camps located in al-Tanf, close to the border with Jordan, in southeastern Syria.

Al-Monitor met in Istanbul with Abdulsalam Muzil, a senior member of the NSA and general coordinator for the Authenticity and Development Front (Free Army), considered to be the nucleus of the NSA, to ask him about his army and its activities.

Al-Monitor:  Could you describe the NSA? Its objectives, numbers, financing, members?

Muzil:  The NSA was [effectively] established at the beginning of 2016 as part of the Pentagon’s plan to combat IS in Syria and Iraq. The army is comprised of members from the Authenticity and Development Front — which withdrew from the eastern region [of Syria] when IS overran it — and to other volunteers who joined [the NSA’s] ranks in growing numbers, especially after the latest operation against IS in al-Bukamal. This is when we received — and are still reviewing — many applications to join. Currently the number of our forces that stand ready and able to fight is 300, and these are tasked with liberating the eastern region from IS, return it to its people and restore safety and security to its lands.

Al-Monitor:  You undertook an operation that was the first of its kind against IS strongholds in al-Bukamal. What was the motive and results thereof?

Muzil:  Indeed, on June 26, we launched a military offensive in al-Bukamal, located 130 kilometers [80 miles] east of Deir ez-Zor. It was unprecedented in that it was the first time that a Syrian opposition military faction encroached into a wide swath of IS-controlled land; previously, contact was confined to limited skirmishes along adjoining fronts, leading to small advances and retreats. In al-Bukamal, our offensive aimed to raise the morale of our people there and demonstrate that IS was but a paper tiger that could easily be vanquished with proper planning, sufficient support and coordination between our fighters, who demonstrated their ability to penetrate into sprawling IS-controlled areas that no one previously dared to attack.

Our successful breach into their area of control greatly affected the morale of IS members who mistakenly thought that the areas that they controlled could not be breached. We thus proved that IS is but a soap bubble whose fighters withdraw when attacked. We sustained regrettable losses, as two of our members were killed in the fighting. Furthermore, one of our troops was taken prisoner by IS and immediately killed in the most brutal manner when his throat was cut. But we killed and wounded dozens of them, with initial estimates indicating that 20 IS militants were killed in the fighting, in addition to a number of wounded who died later on. We managed also to destroy many of the organization’s vehicles and equipment that we targeted with anti-armor and long-range weapons.

Al-Monitor:  What are your future plans against IS? Who are you coordinating with, and what level of coordination is there with the allies? How is coordination being implemented with [coalition] air power?

Muzil:  Undoubtedly, new operations will be undertaken against our enemy IS. We are presently preparing for a larger offensive that will surprise the organization. It will be of a higher caliber and will employ different strategies. For the sake of operational security and to maintain the element of surprise, I cannot say more. As for coordination with allies, it is excellent and high. Keeping in mind that we are not the only faction that coordinates and cooperates with the allies, the NSA is distinguished by the fact that — unlike other revolutionary factions — its coordination with the allies and international coalition rises to the level of receiving air support from warplanes — the cover of which has been good with warplanes remaining overhead throughout the battle. Previously no one was afforded such support, except for the Kurdish-majority Syrian Democratic Forces [SDF].

Al-Monitor:  About one month ago, you were targeted by the Russian air force. Why did that occur, and what were the repercussions?

Muzil:  On June 16, our camp fell victim to a significant attack, when, in one day, it was targeted by more than 14 Russian air force raids that led to the death of two of our troops and the wounding of 13 others. The intent, it seems, was to challenge alliance forces as well as weaken our capabilities and reduce our strength. This is because they [Russian forces] do not want IS to be defeated at this time, to give Assad additional time to allege that he is combating terrorism. In addition they want to follow their own timeline in fighting IS, by destroying all moderate opposition forces prior to getting rid of IS — thus allowing Assad to remain alone in power. We also believe that the air raids were a direct message to the effect that Russia considered us a terrorist enemy, in no way different from IS.

Al-Monitor:  Do you expect the United States to change its strategy toward dealing with you?

Muzil:  We expect, and hope, that the United States will change its IS fight strategy. The current one has proven to be ineffective because the organizational structure of IS has changed since its inception. IS has expanded into new areas, requiring the adoption of tactics other than just air raids. In addition to aerial bombardment, special forces must be deployed on the ground in Syria, thus allowing the launching of attacks against IS militants once their encampments are targeted from the air. As I said, these forces must be Syrian, and thus receive popular support and aid from the civilian population, instead of their being viewed as non-Syrian invaders.

Al-Monitor:  Do you think that the current anti-IS strategy is effective? What alternatives are there?

Muzil:  Honestly speaking, yes, we believe that a change in strategy is required in the fight against IS, because the nature of the battle is changing, as is the reality on the ground. When battle strategies were drawn to combat IS, the latter only controlled Raqqa in 2013, and some opposition military formations refused to fight against it. These strategies are still being employed to this day, despite the fact that IS now has expanded to many other regions that include deserts, plains, rocky areas and some villages. As a result, combat tactics and strategies must be changed. Though it should be noted that, as a result of the successive defeats leveled against it, IS today is much weaker than it was, and the Free Army is continuously attacking its strongholds in Aleppo’s northern countryside. This is not to mention the fact that a number of prominent IS leaders were killed, the latest among them Abu Omar al-Shishani, the organization’s so-called war minister.

Al-Monitor:  Will you participate in the operation to liberate Raqqa from IS when said operation is launched?

Muzil:  It must be said that the final battle to break IS’ back will be in its self-declared capital of Raqqa. Said offensive might be launched without warning, to maintain the element of surprise. The attack will signal the end of IS’ existence on Syrian soil. As natives of Syria’s eastern region, we understand its intricacies and geography more than anyone else. As a result, we will have a bigger role to play and will endeavor to oust IS from al-Bukamal and Deir ez-Zor first, because we cannot go to Raqqa and leave IS behind.

Al-Monitor:  Is there coordination between you and Russia?

Muzil:  There is no coordination with Russia, which we consider to be playing a part in our demise. For, as I said, it launched 14 attacks against our training camp, leading to the death of a number of our troops. Notwithstanding that fact, Russia has been targeting civilians on a daily basis with internationally banned phosphorus and cluster munitions; how then could we have any dealings with the Russians? Furthermore, we have lost faith in the Russian government, which makes press statements contrary to its actions on the ground. For every time a truce is announced somewhere, we abide by its terms only to see the Russian or regime air forces breach it, the latter with Russian blessings. They always justify their actions as being part of the fight against terrorism, but the facts on the ground indicate that their aim is to attack the Syrian revolution and target civilians.

Al-Monitor:  How does the NSA deal with civilians when seizing control of an area? What are the procedures and measures taken to protect the civilians?

Muzil:  As a matter of fact, civilians are of paramount importance to us and at the basis of our planning and precautionary measures so as to protect them against the threats of clashes and airstrikes. We often try to drag IS fighters to areas not very populated. In the latest battle in al-Bukamal, we used a new technology that has not been previously used in the war in Syria; we used the local radio frequency to communicate with civilians and inform them of safe areas where they could take refuge. The coalition aircraft had dropped leaflets mentioning the radio frequency so that we could communicate with civilians.

Al-Monitor:  Will the NSA resort to guerrilla warfare, which involves small clashes without controlling IS, or to the battle of armies aimed at liberating lands and maintaining them?

Muzil:  We are resorting to all possible ways to weaken and eliminate IS. We are using hit-and-run tactics in the areas under IS’ control in Raqqa, through the assassinations of its leaders and fighters. We also use armies from time to time to weaken it and expel it from certain areas and seize control of liberated areas, so as to reduce its areas of control.