Was Arabic ad on Israeli TV a clever publicity stunt?

An Israeli department store probably anticipated the controversy its prime-time Arabic-language commercial would kick off and is now reaping the benefits of notoriety among large swaths of Israelis. 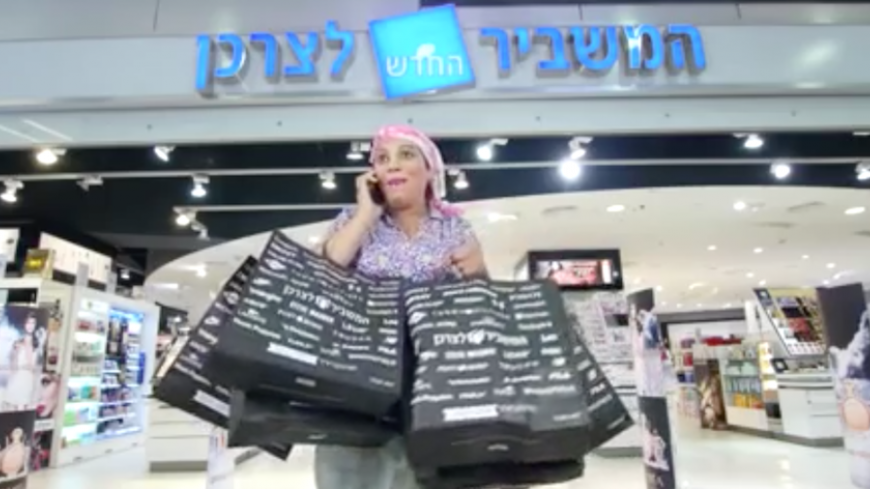 Screenshot of Arabic-language advertisement for the Hamashbir Lazarchan chain of department store aiming for Arab customers in Israel, July 12, 2016. - YouTube

Racism toward Arabs in Israel is so rampant that Israeli web commenters respond with automatic hysteria every time they encounter them. Advertisers for the Hamashbir Lazarchan chain of department store are familiar with the harsh and violent discourse prevalent in Israel today, and knew very well the kind of uproar that would be sparked by their advertisement that ran during the Euro 2016 soccer finals July 10, the first Arabic-language ad broadcast during prime time on Israeli commercial television.

Responses to the ad couldn't have been more predictable if they were written in advance. For instance, Sharon Uziel's comment on Hamashbir’s Facebook page was unequivocal: “A chain that encourages terrorists.” On the other hand, Maya Bakal-Ron wrote in a no less extreme tone on the same page: “Good for you for advertising in Arabic!! A breakthrough in the right direction!!” — as if national aspirations for coexistence and peace stood behind the ad. The commenters seemed not to understand anything. Their emotional response, however, played right into the strategy behind the ad.

Aside from the predictable angry responses and vows to boycott the chain in the days that followed, public discourse in Israel also turned to the purchasing power of the Arab sector in Israel. The economic newspaper Calcalist estimates the sector’s purchasing power at 1.7 billion shekels ($442 million) a month.

“The Arab sector represents about 20% of our purchasing power, but we felt that we haven’t addressed them enough and examined why this was so,” Hamashbir Lazarchan's marketing director Sigal Cohen told Al-Monitor. For Hamashbir, whose revenues amount to more than a billion shekels (over $260 million) a year, 20% is not negligible. The ad was targeted at the wedding season in the Arab sector with its expensive dowries and promised prizes to anyone who purchases in large sums. “There are 15,000 to 18,000 weddings a year in the Arab sector and it’s an untapped market,” Cohen explained.

Despite the promising statistics Cohen describes, one of the infamous failures of the advertising industry in Israel is its neglect of the Arab sector. In 2014, The Marker reported that out of 3.5 billion shekels ($909 million) spent on marketing a year, only about 100 million ($26 million) are directed toward the Arab sector.

"That's exactly the issue," Dafna Engel, Hamashbir's account manager at the McCann Tel Aviv ad agency, told Al-Monitor. “It’s part of a trend of increasing budgets and including more and more clients.” Rami Shavit, Hamashbir’s CEO, noted in an interview after the ad was aired, “Out of a budget of 70 million shekels [$18 million] a year for advertising, we allocated only 1.5 million shekels [$389,000] a year to the Arab sector, and I decided to change this. … [I’m interested] in the Arab sector increasing its sales with me. There’s less of a recession in the Arab sector.”

The Marker argued that the move was a failure because most Arab households in Israel didn't watch the finals on Channel 2 for technical reasons. But according to Musa Hassadia, the owner of a marketing firm, "The Arab public knew how to stream it, and they were exposed to the campaign and the ad. The sector [now] has a great sense of affection for Hamashbir.”

Hassadia added, "Hamashbir broke a taboo in order to win the affection of the Arab public, especially young people, not only through the usual media outlets for the sector, but through a Jewish commercial channel. It’s a statement.” The marketing strategist explained that these days companies have no choice but to pay attention to the Arab sector “because there’s more competition and more opportunity to buy abroad. Companies have suddenly realized that, so they have to build an image in the Arab sector or they will miss out on this market.”

Israeli television broadcasters apparently have no qualms about ads in Arabic: Reshet, which broadcast the ad, had no comment. But sources who work in the field told Al-Monitor on condition of anonymity that the commercial channels would air any ad, in any language, from any source as long as they pay, and the ad meets the regulation standards.

But there's a good reason that there aren't ads in Arabic on Israeli prime-time TV: Arabs in Israel don't really watch Israeli commercial television. On any given night, only a few tens of thousands of Arabs watch Channels 2 and 10, even though the Arab sector comprises 20% of Israel’s citizens. These viewers represent a single rating point. So it seems that the move set no precedent and was not groundbreaking enough to change anything. Even if the budgets for advertising directed toward the Arab sector increase, we can surmise that they won’t be allocated for ads on commercial TV. The key to the success of this ad, it seems, is in the media uproar it quickly sparked. If Arabic ads were aired on Channels 2 and 10 every night, their power would probably diminish very quickly.

McCann and Hamashbir Lazarchan know this, although they're diplomatic. “Clearly we knew the ad could cause an uproar,” said Engel, “but with Hamashbir’s courageous decision we decided that such an appeal would be effective and spark conversation.” According to her, exposure to Hamashbir Lazarchan increased “for the general sector and the Arabic sector thanks to publicity online or on spots on morning shows, talk shows, items on the radio and in the press.” All of which, of course, centered on the issue of language and not the campaign itself.

There's a sense that the campaign is at least partly a cynical move meant to exploit the fiery and bigoted public and the Arab sector, which longs for positive treatment from mainstream Israel. Israeli-Arab author Ayman Sikseck wondered in a Facebook post to whom exactly the ad was actually directed. Sikseck told Al-Monitor, ''In Israel, the Arabic language is always presented as dangerous or ridiculous. Here they opted for the second description. It is important that there are Arabic prime-time ads, but as a consumer, I would like these ads to truly reflect the way Arabs in Israel behave and talk, to use a language that is beyond the stereotypes of terrorists or primitive people.''

This ad may indeed have been intended to create a sensation, yet we can still hope that it could constitute a first step toward the normalization of Arabic in the Israeli public space, and that the next Arabic ads will reflect the Arabs in Israel the way Sikseck hopes: as just normal people.