The cultural war brewing inside the IDF

Statements by leading Zionist-Orthodox rabbis against gays and in support of the exclusion of women from the army reflect the growing war of culture waged in Israel, between liberals and those who aspire for a more Jewish-religious state. 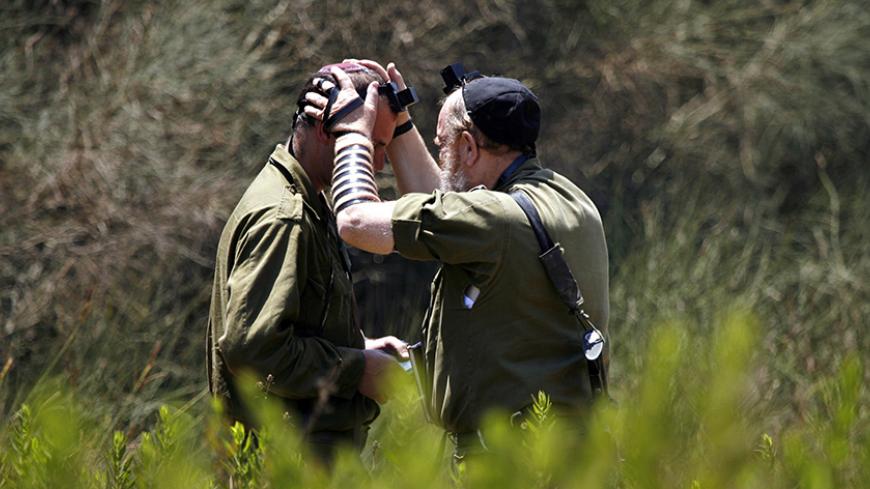 An Israeli army rabbi blesses a soldier who just returned from Lebanon to the north of Israel, near the Israeli-Lebanon border, Aug. 11, 2006. - REUTERS/Petr Josek

Words that the newly promoted chief rabbi of the Israel Defense Forces (IDF), Col. Eyal Karim, spoke in the past have caused an uproar in Israel. Interpreting Jewish law in a certain way, Karim permitted IDF soldiers to rape gentile women during wartime, called gays “maimed human beings” and stated that women are sentimental creatures who need to be “in their husbands' possession.” The rabbi also opposed the drafting of women into the IDF and to women singing in front of men in the IDF, according to the rabbinical principle of “a woman’s voice is sexually enticing.”

Supporters of Karim explain that these statements are not the rabbi’s opinions, but are interpretations he gave to texts of Jewish law that have no connection to contemporary life. They say that he is in favor of women serving in the IDF, is against rape in any shape or form, and has attended dozens of events and ceremonies over the years in which women sang — and did not feel it necessary to leave the room. An officer who has spoken with Karim in the past told Al-Monitor on condition of anonymity, “When I put on my uniform, the uniform determines my actions.” Thus, he made it clear that in the case of a contradiction between Jewish law and the army's order, anyone wearing an IDF uniform is obliged to obey his commanders.

While this storm was starting to settle down, Rabbi Yigal Levenstein, the founder of the Zionist-Orthodox army preparatory academy in the settlement of Eli, spoke even more harshly. Levenstein said that gays are “perverts.” He added that this group is trying to force its presence in the army with all its might and that these deviants even deliver lectures in the IDF officers' school. He said that the phenomenon of placing extreme importance on not endangering innocent Palestinian bystanders during battle — even at the cost of endangering the soldiers — is spreading like wildfire, putting the soldiers at risk. In addition, he said that the Jewish Reform movement is a branch of Christianity, and that lots of branches started in Judaism before moving on to other religions or movements.

The Zion and Jerusalem Conference at which Levenstein spoke was dedicated to “the infiltration of Reform Jewry into the State of Israel.” The issues discussed at the conference reflect the growing exacerbation of the culture war waged in Israel almost since its very inception in 1948: the war between liberals and conservatives; the secular and the religious; and pragmatic Israelis and messianic Israelis.

The statements made by the two rabbis are not the opinions of extremists from marginal societal groups. Karim and Levenstein are very central rabbis within the Orthodox Zionism (also called National Religious) movement, which over the last decade has been paving its way to higher Israeli echelons in every sphere of life, and mainly in the IDF. The army preparatory program in Eli, founded by Levenstein, prepares religious Zionist youths for their army service; the school's founders even won the 2016 Israel Prize. The percentage of graduates from Orthodox Zionist institutions who serve in the IDF has been growing over the years: more than 50% of the attendees belonged to the Orthodox Zionism movement in many of the officers’ training courses

The members of Israel’s former secular-liberal elite group (those identified with the state-founding period Labor movement) serve in the army shoulder to shoulder with Israelis of Ethiopian heritage, Russian immigrants, Druze, Bedouin, youths from the periphery and even a growing number of Christian and Muslim Arabs. Thus, what we are seeing today is a war of control over the IDF, an institution that had once been called “the nation’s army.” The State of Israel is populated by several tribes of the same nation; each tribe perceives the army from its own point of view and pulls in its own direction.

The opinions expressed by Karim and Levenstein have generated many reactions and raised a giant storm in the Israeli media and the Israeli public agenda. It is noteworthy that most of the rabbis who responded negated the interpretation of their words and the general tone. They made it clear that Judaism must not be allowed to get between the soldiers and their commanders, and religious beliefs should not be a factor in IDF-related internal issues or operational orders. The problem is that a not insignificant number of these rabbis secretly support the stances of Karim and Levenstein and are determined to win the culture war that is running riot in Israel.

In regard to this, the extremists among the Orthodox Zionists have aligned themselves with the ultra-Orthodox, who have always disassociated themselves from the IDF’s ethical values, its liberalism, tolerance of members of other religions and its unequivocal egalitarian views of gays and lesbians. The more time that passes, the greater the cultural clash between the various extremes. Meanwhile, the army is caught in the middle and is sustaining serious damage in the process.

The IDF is still controlled by the values of the “old” (state-founding period) Zionism. Chief of Staff Lt. Gen. Gadi Eizenkot recently took action to minimize the influence of the rabbis over what takes place in the army by cutting down the Military Rabbinate and on Jan. 1 turned what is called “the Jewish consciousness (identity) department” into the Education Corps, while clipping its wings.

The question is whether this is a hopeless rear-guard battle in light of the strengthening of Orthodox Zionism in Israeli society, the overall rightward trend and the ongoing phenomenon of large parts of Israeli society becoming more religious — toward Judaism in general and ultra-Orthodoxy in particular.

Israel, like Europe and the United States, has been changing form in recent decades. The demographic changes (high natural growth within the ultra-Orthodox and Orthodox communities compared with the secular sector) will inevitably involve cultural friction and strife connected to influence over all spheres of life. The historic compromise of a mixed-gender praying space recently attained between Reform-conservative Jewry and the state, with regard to prayers in front of the Western Wall (the holiest site in Judaism), was viewed as an important achievement for the Reform movement in its efforts to assimilate and penetrate Israeli society. But the compromise was frozen March 27 by Prime Minister Benjamin Netanyahu due to pressures of his ultra-Orthodox coalition partners. Netanyahu, a thoroughly secular Jew himself, secretly supports the Reformers but is forced to fall into line with the ultra-Orthodox and the religious hard-liners.

The inner breach of the public only intensifies and the assessment is that the confrontation will only escalate since none of the sides can or will concede its beliefs, worldviews or stances. Luckily, there are enough external threats to keep the Israelis united, in order to survive. When they find the time to engage in internal disputes, that is a sign the security situation is relatively under control.