Despite cold reactions by both Israelis and Palestinians to the Quartet report, the EU is determined to establish a roadmap for an international conference on a two-state solution process. 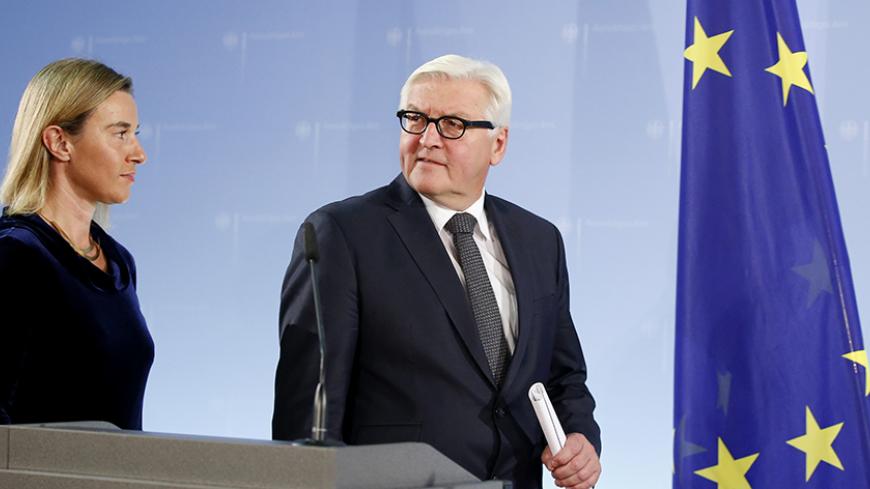 The recent report by the Middle East Quartet bluntly criticized Israel’s systematic settlement expansion and large land takeovers in Area C, targeted at preventing a two-state solution. Nevertheless, the report was met with considerable disappointment at the highest levels of the Palestinian Authority, and also a sigh of relief in the prime minister’s office in Jerusalem.

The Palestinians had hoped that similarly to the June 3 Paris summit declaration, the report would include terms of reference for the permanent status negotiations. They expected the report to specifically highlight the 2002 Arab Peace Initiative as the main basis for negotiations leading to a state along the 1967 lines with East Jerusalem as its capital. Ramallah had even asked the EU and the United States for a binding timeline for negotiations, followed by a Security Council resolution.

A senior Palestine Liberation Organization official close to President Mahmoud Abbas told Al-Monitor on condition of anonymity that Abbas is severely critical of US Secretary of State John Kerry for pressuring the EU not to make the Quartet report a policy platform for future negotiations. The senior official assessed that the United States will publish guidelines for future negotiations as a platform for the next administration, possibly via a presidential policy speech. He also expressed concern that the US policy statement will allude to the need to recognize Israel as a Jewish state. According to this source, Ramallah is committed to working with Egypt and France on a binding UN Security Council resolution on Palestinian statehood referring in detail to settlement expansion, the 1967 lines, East Jerusalem and a two-year timeline. As the official put it, “For us the Quartet report is a non-paper; our sole basis is the Arab Peace Initiative.”

Though highly criticized by the Quartet, the Israeli government is satisfied with the report. A confidante of Prime Minister Benjamin Netanyahu told Al-Monitor on condition of anonymity that Netanyahu sees the report as a non-binding declaration. The prime minister had asked Kerry in their Rome meeting June 27 to refrain from making reference to the 1967 lines. As for the issue of settlements, the Israeli Cabinet responded with the approval for the building of hundreds of new housing units in the Jerusalem area.

The responses and reactions by the two parties are understandable. The Quartet presented unprecedented work, outlining the obstacles to a two-state solution in great detail. The most striking finding is the gradual de facto annexation of much of Area C (which makes up 61% of the West Bank) by Israel.

US diplomatic sources in Tel Aviv affirmed that Kerry convinced the EU to refrain from setting a new basis for future negotiations. There is no US-EU consensus on many of the permanent status issues, as the US administration traditionally tilts more toward Israel.

The outcome, though, is that the Palestinians are left without any hope for an internationally monitored two-state solution process, and their despair could lead to more violence or a new intifada. Israel was not warned strongly enough to force it to halt settlement construction and does not have to pay for its occupation policies. All in all, the Quartet report seems to have missed its original target of producing a path of hope for the pragmatists on both sides.

This is not Brussels' view. Though Ramallah and Jerusalem have both made their positions clear to the US, the EU has not lost hope, nor has it retracted its commitment to continuing the path toward a policy platform for a two-state solution and an international conference before the end of 2016.

A senior official close to EU High Representative for Foreign Affairs and Security Policy Federica Mogherini told Al-Monitor that in the aftermath of endorsing the French initiative and the publication of the Quartet report, EU officials are preparing a tentative road map for progress in the diplomatic process. The EU's premise, he explained, is that Europe will have to act independently this year because of the US presidential transition. This road map will include several stages, beginning with talking to the parties about curbing Israeli settlement expansion and Palestinian incitement to violence, together with economic confidence-building measures in Area C for the Palestinian agricultural sector. Thereafter, Brussels, in coordination with the French, will start preparing for a possible international peace conference with the parties before the end of 2016.

Israeli rejection, Palestinian political weakness and US passivity alarm Brussels, increasing its fear of violent escalation in the Palestinian-Israeli conflict. And so, despite negative reactions by both sides, Europe is stepping into the current policy vacuum. At the moment, it’s the only show in town.