Iraqi envoy quit over failure to prevent IS 'tragedies'

Ambassador Lukman Faily bemoans missed opportunities to head off the Islamic State early on and elaborates on his post-diplomatic plans in an exit interview with Al-Monitor. 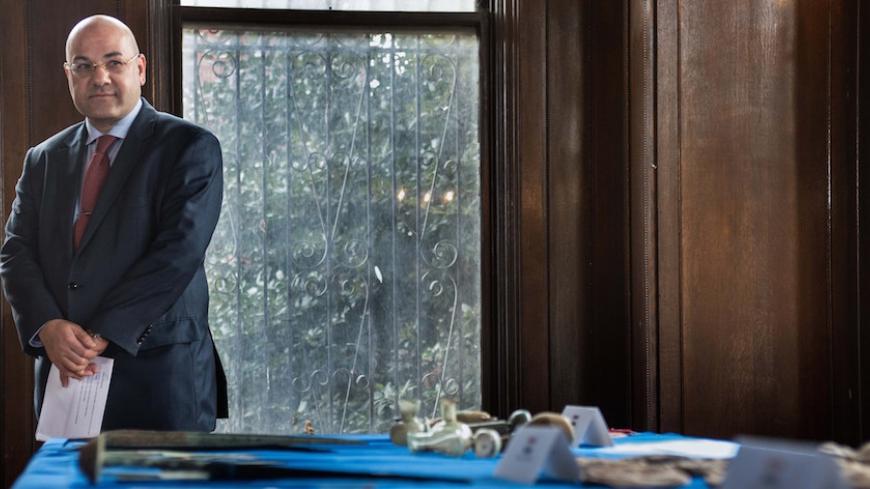 The Iraqi ambassador to the United States, Lukman Faily, looks on during a ceremony at the Iraqi Consular Section in Washington on March 16, 2015, to repatriate more than 60 Iraqi cultural items that had been smuggled into the United States. - NICHOLAS KAMM/AFP/Getty Images

The rumor mill has been churning steadily ever since Baghdad’s man in Washington decided to call it quits a couple of months ago.

Did he rub someone the wrong way? Is he gunning for higher office?

In an exclusive exit interview this week with Al-Monitor, Lukman Faily insisted the truth is quite different: He’s become convinced that the superficiality of the US-Iraqi relationship is one of the reasons the Islamic State (IS) was allowed to run rampant for as long as it did. And he doesn’t think he can change things from the inside.

“One of the key reasons I’m leaving the service … is our inability to work with each other enough to prevent the tragedies that took place,” Faily told Al-Monitor. “And we had to pay the casualties for it.”

To prevent that from happening again, Faily plans to continue shuttling between the two countries as he leverages his unique talents and experience to help create a true strategic partnership between the two countries. He’s staying tight-lipped for now about the specifics, but said he’d be announcing “very soon” a new venture that he promised will prove "very exciting, and I hope very productive.”

“I don’t want to get out of the seat,” Faily said. “I want to change the chair.”

With IS on the defensive throughout Iraq, Faily credited President Barack Obama's administration for finally waking up to the threat. But Faily said his government’s increasingly dire warnings went unheeded for almost a year, starting with his visit along with then-Foreign Minister Hoshyar Zebari to Joint Chiefs Chairman Martin Dempsey at the Pentagon in August 2013.

Without recrimination and without naming names, Faily coolly described a trio of factors he blames for the slow response: The United States first viewed IS as an Iraqi domestic problem rather than a global geopolitical threat (Obama’s infamous jayvee team put-down); cuts to the US Embassy staff in Baghdad went too deep; and Obama’s White House had a “mental block” when it came to seeing Iraq as a “project to invest in.” And Faily bluntly confirmed a long-lasting suspicion that the United States had made it clear that it would not act until Maliki was on his way out the door.

“It gave us a clear example that there is what you might call conditionality in this global fight against [IS],” Faily said. “Here the issue is not just playing with politics, but playing with people’s lives.”

A former tech sector manager and longtime Saddam Hussein opponent, Faily served as ambassador to Japan for three years before taking his Washington posting in 2013. He said he had little interest in the ritzy lifestyle, and met with Al-Monitor in a deserted hotel hallway in between visits to the State Department and the Aspen Security Forum.

“I'm not seeking high office in any way, shape or form. That doesn't make me tick,” Faily said in a wide-ranging, hourlong interview. “But making people aware of the challenges — that's what I want to contribute."

US-Iraqi relations, he said, are too dependent on individual relationships that don’t allow for follow-through on big decisions. He sees himself as ideally suited to help build more sustainable bridges between the two countries.

“The Americans like one-on-one. It's easier, I get that. But it doesn't help us in Iraq. It doesn't help the team orientation we need," he said. “There are tons of opportunities that were lost because we did not work as a team, on both sides.”

Faily remains convinced that post-Saddam Iraq has a chance, with US help, to build a new, more stable society. But the project is a long-term challenge, he warned, and cannot succeed without an equivalent investment.

What Iraq desperately needs, he said, are founding fathers — selfless men and women who can see beyond their narrow “ism” and their next election and create a new society.

After the state collapsed following the US invasion in 2003, he said, "a new social contract had to be defined between the state and its citizens."

Part of that social contract, Faily insists, is keeping the country together. Although he’s a Kurd and his father was a confidant to the late Kurdish leader Mustafa Barzani, Faily believes the current Kurdish push toward independence is a mistake.

Rather, he said, Baghdad and Erbil must forge a bond that goes deeper than the mostly transactional relationship that characterizes so much of Iraqi politics today.

“If anybody tells you that the current formula we have — whether it’s the constitution, the political institutions — is good enough for Iraq, then they are substantially missing out on really understanding the casualties we’ve paid,” Faily said. “At this moment, the return on investment is not there.”