In an interview with Al-Monitor, Iraqi Ambassador Lukman Faily said the United States is "more influential" than Iran in helping Iraq defeat al-Qaeda in Anbar. 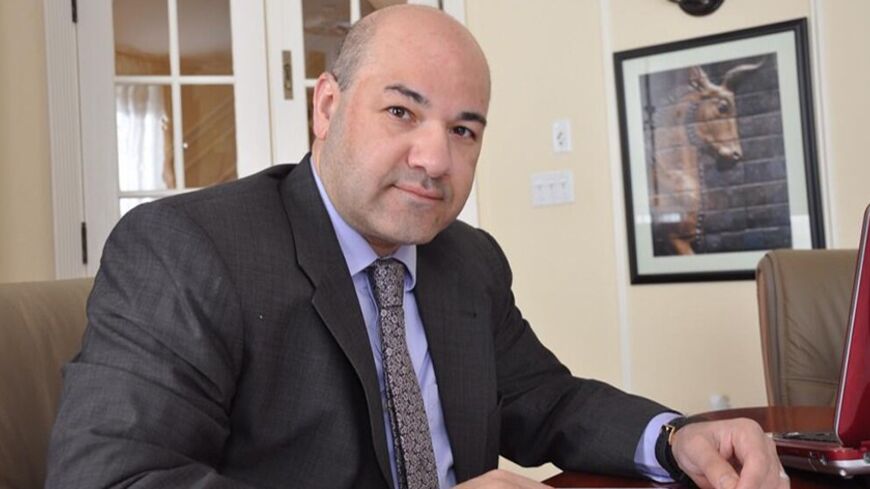 Iraqi Ambassador Lukman Faily said April 23 that parliamentary elections scheduled next week are unlikely to produce a majority for any one party and that the United States retains considerable influence in Iraq despite the withdrawal two years ago of all American combat troops.

Faily, speaking to Al-Monitor a day after completing the Boston Marathon, said Iraqis have a different “concept of time” than Westerners and suggested that the elections could also help clarify nagging divisions that have undermined Iraqi unity, such as the distribution of oil revenues among Iraqi regions and provinces.

In the run-up to elections, stories in US media about Iraq have been almost universally gloomy, stressing the danger of the country dissolving back into civil war following the entrenchment of religious extremists in predominantly Sunni Anbar province, an epidemic of suicide bombings directed against Shiites and growing separatist tendencies in the northern Kurdish area. Nearly 8,000 civilians died last year and more than 2,500 people have been killed since January — tolls not seen since Americans were fighting in Iraq in 2008.

Faily, a British-educated mathematician of Kurdish origin who previously served as Iraq’s ambassador to Japan, did not minimize the challenges. However, he pointed out that some 9,000 people are running for 328 seats in parliament — an increase in candidates since the last elections in 2010 — and said that participation was expected to be around 60%. To prevent the disenfranchisement of Sunnis — which diminished the legitimacy of Iraq’s 2005 elections, boycotted by many Sunnis — the nearly 400,000 residents of Anbar who have fled their homes since fighting broke out there in December will be permitted to vote in neighboring provinces, Faily said.

Former US Ambassador to Iraq Zalmay Khalilzad, speaking April 22 at Johns Hopkins University School of Advanced International Studies, said the most likely outcome is that Prime Minister Nouri al-Maliki’s State of Law Coalition receives the most votes but not enough to form a government without protracted negotiations. Faily agreed. “We know for a fact that there will not be one party that takes a majority,” he said. “If you look at Anbar or the KRG [Kurdistan Regional Government] region, State of Law does not have representation. … No single party or even bloc can dominate. … They have to get the buy-in of others.”

After the 2010 elections, it took Iraqis nine months to form a new government and this could happen again, with Maliki serving in an acting capacity, said the ambassador, who comes from Maliki's Dawa Party. “The key challenge is that most of the political blocs don’t have clear red lines, which creates confusion and misreading of each other,” he said. “You may have prolonged government formation after. Historically it wasn’t quick. But the concept of time is not as crucial for us as in the Western concept.”

Among the tough decisions on hold until after elections: agreement on how much of their oil Kurds can export through Turkey and how much revenue they will get from the central government. Faily said the Kurds are not the only ones who are looking for more resources from Iraq’s oil wealth. “We get more calls from the governor of Basra than from the KRG on this issue,” he said.

At the same time, Faily said that oil remains the “gel” for society and could keep Iraq from fragmenting into three or more pieces. “There is enough oil there for everybody to be prosperous,” he said.

Beyond its own significant ethnic and religious divisions, Iraq has suffered from the spillover of Syria’s three-year bloodbath. Faily said, “At this moment, we can’t see any light at the end of the tunnel in relation to the Syrian situation.” He called the situation in Syria “as complicated as Iraq” but less prone to resolution because “you don’t have the wealth of the oil to entice parties into government formation.”

Syrian factions, he said, are embroiled in a truly existential struggle where combatants are unable to negotiate because “nobody is willing to accept the other. … What we had in Iraq was sectarianism; what you have in Syria is the annihilation of ethnicities.”

Faily denied allegations that the Baghdad government is encouraging Shiite fighters to go to Syria to support the regime of Bashar al-Assad. While Iraqis who opposed Saddam Hussein were sheltered by Assad’s father, Faily said, “As a government, we never advocated any fighters to go there. … People try to pigeonhole us into supporting the Syrian regime. We’ve never tried to say we support what the Syrian regime is doing. At the same time, give us an alternative form of government.”

Many commentators have suggested that Iran — which also sheltered Saddam's opponents — is now Iraq’s most important ally. Faily said he could not quantify the relationship but asserted that the United States was still a key partner, particularly in trying to resolve the conflict in Anbar. Americans have influence because of Iraq’s need for US military equipment and training, the history of the 2007-2008 surge and of the Sahwa, or Awakening, of Sunni Arab tribes opposed to al-Qaeda, he said. He said Iraq also looks to the United States for expertise in education, health care and other core infrastructure and noted that Iraq has a strategic framework agreement with Washington, not Tehran.

Asked what more the United States could do to help remove Sunni extremists hunkered down in Fallujah, Ramadi and other Anbar cities, Faily said, “We are willing to discuss with you all of our needs and cooperation short of boots on the ground.” He said the Barack Obama administration and Congress are exhibiting a new “sense of urgency” about Iraq but that “we also know we can’t get it in the pace we want it.” Apache helicopters, for example, are just being delivered and “we would have wanted them last year,” he said.

Faily, who offered in an interview with Al-Monitor shortly after he arrived in Washington last year for Iraq to serve as a bridge between the United States and Iran, suggested that Iraq no longer needed to play a mediating role because Washington and Tehran are talking directly. However, the US-Iran relationship “is still in the discovery mode,” he said, and nuclear negotiations would be the “acid test for this relationship to see if it can be evolved into some kind of coexistence and normality rather than tension and animosity.”

If Iran concludes a long-term nuclear agreement with the United States and the other permanent members of the UN Security Council plus Germany, that will have a soothing effect on the entire region, Faily said. “It will automatically lead to a better environment for mutual understanding … on matters having to do with the Gulf, with nuclear proliferation, with the sectarian element and stability and security of Israel and Hezbollah and Syria are a direct extension of that.”

In terms of Syria and the regional sectarian divide, however, Faily said a bigger factor would be Iran’s relations with Saudi Arabia. “An Iranian-Saudi rapprochement will have a significant impact on Syria, which will indirectly have an impact on us,” he said. It “may be more influential than Iranian-American rapprochement because these two are direct players.”

In terms of his own mission to the United States, Faily said he was working hard to improve Baghdad’s understanding of the dynamics “within the Beltway” and to increase people-to-people ties. That is why he is active on Twitter (@failylukman) and took part in the Boston Marathon.

The “key indicator” of whether he is a successful ambassador, Faily said, is if Americans “have a positive connotation of Iraq in their psyche” when he finishes his assignment a few years from now.