With only one year left of Hassan Rouhani's first term, hard-liners are stepping up efforts to make him the first Iranian president not to be re-elected for a second term. 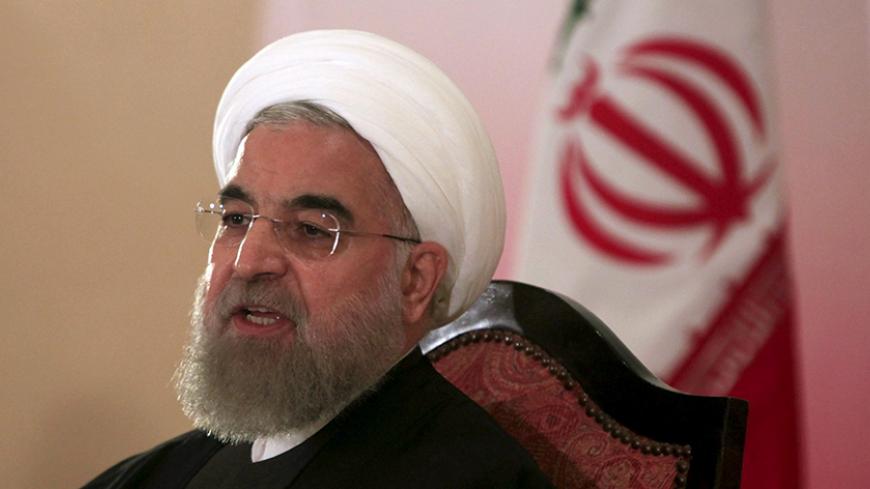 TEHRAN, Iran — As the faction most opposed to the government, Iran's hard-liners have made it their goal to make Hassan Rouhani the first Iranian president not to be re-elected for a second term. In fact, this objective was sought since their loss of the executive branch back in 2013. They simply cannot fathom being barred from the presidency for another five years until the 2021 presidential election. Thus, they're determined to seize back control of the executive branch as soon as possible. Their latest move, the war over pay stubs, is considered to be in this line.

As has been the case with previous Iranian presidents, Rouhani's political fortunes are hard to predict. Numerous members of the ruling elite believe that he will be serving a second term. For instance, Speaker Ali Larijani, a Principlist, has emphasized that Rouhani is "on the whole moving in the right direction," adding that "some people believe Dr. Rouhani will serve for only one term. I would say 'no' since I don't think that is very likely." Meanwhile, former President Ali Akbar Hashemi Rafsanjani believes that "given Rouhani’s popularity and his performance with the [conclusion] of the Joint Comprehensive Plan of Action [JCPOA], he is without a serious rival in the 2017 presidential election."

At present, there are five key economic and political variables that can play an important role in determining whether Rouhani will get a second term.

First is the scapegoating of former President Mahmoud Ahmadinejad for all current economic problems. Rouhani and his Cabinet look to the previous administration as the cause of the current economic dire straits. This is a line of reasoning that, even if valid, does not satisfy average — and particularly vulnerable — Iranians. In the Rouhani administration's telling, even the most popular policies of the previous administration were wrong and problematic. Indeed, Minister of Roads and Urban Development Abbas Akhoundi has called the Mehr Housing Project a "disaster."

Comments such as these are seen by the lower classes as a sign that the government does not represent them. These citizens question what Rouhani has done for them, since many of them were able to own homes and were also given a monthly income in the form of cash subsidies as a result of Ahmadinejad's populist programs. Though the cash payments were disastrous for the economy, Rouhani has been unable to convince the poor that these kinds of policies are problematic.

The second reason is the advanced age of some members of Rouhani’s Cabinet and their closed-loop conduct. The Rouhani administration does not engage in constructive collaboration with elites outside its inner circle. Economists such as Farshad Momeni, Mohammad Raaghfar and Jamshid Pajouyan have expressed their dissatisfaction with what they call the government's lack of economic strategy as well as its "closed-loop nature." Of note, the administration is also made up of many older officials, something that is not necessarily considered positive as far as public opinion is concerned. Indeed, the average age of Rouhani's Cabinet members is 57, making this administration the oldest since the 1979 Islamic Revolution. These aged politicians are very conservative and unable to make radical economic and political changes. Lack of willingness to change the status quo will frustrate part of Rouhani's sympathizers.

Third comes the continuous crippling economic recession. Although the announced strategy and makeup of Rouhani's economic team initially inspired hope, it has failed to live up to public expectations. Without a doubt, the continuous recession and its consequences — especially for the labor market — have worked in favor of Rouhani's rivals. The administration's only hope was for a noticeable positive change in economic conditions after the lifting of sanctions. However, in reality, no such change has occurred. In the Iranian calendar year 1393 (ending March 20, 2015), the economy saw positive growth, but it came to a standstill in the following year (ending March 19, 2016). It has been predicted that during the current Iranian calendar year (ending March 20, 2017), economic growth, which is connected to increasing oil exports, will reach 3%.

In this regard, the administration has not met the public's expectations, and it is unlikely that the economy will perform well in the near future. It can be assumed that the situation will likely be better than in the 18 months preceding Rouhani's election. The problem is that people will compare their current situation with that of the welfare years of 2006-10 — funded by record windfall from oil revenues — when Ahmadinejad was in power.

Fourth, the continued pressure of the United States and the blocking of banking operations due to US sanctions threaten Rouhani's re-election. In this vein, the recent confiscation of Iranian assets after a US Supreme Court ruling in favor of families of terror victims seeking compensation signals trouble ahead. There are also the issues of the Canadian judiciary confiscating $15 million worth of Iranian assets, the continuous aggressive tone of the US Congress and Republican presidential candidate Donald Trump's attitude toward Iran. These kinds of developments have resulted in Iranians questioning the benefits of the JCPOA. While sanctions have formally been lifted, it will take time until conditions return to normal. Though the better-informed citizens recognize this, the wider Iranian society — and particularly the lower classes — does not. They expect an immediate impact, such as drastic price declines, which have not occurred.

Fifth, Rouhani's inability to curb the actions of powerful institutions outside his control hurt his chances for a second term. The mass disqualification of all prominent Reformists prior to the February 2016 parliamentary and Assembly of Experts elections did not sit well with Reformists and pro-democracy activists. Moreover, the continued house arrests of the leaders of the Green Movement, jailing pro-democracy activists such as Narges Mohammadi as well as the Guardian Council's disqualification of Minoo Khaleghi after her election as a member of parliament from IEfahan are other high-profile grievances.

In addition, Reformists are dissatisfied with the Rouhani administration's lack of action on the reported cancellation and changing of votes in cities such as Ahar, Bandar Lengeh and Tabriz, where the Reformists had won the majority of votes. Additionally, the election of hard-line Ayatollah Ahmad Jannati as the chairman of the Assembly of Experts, even though he was barely elected to the clerical body, was also a blow to the Reformist camp. Meanwhile, social issues such as the cancellation of licensed music concerts, restrictions imposed on filmmakers and morality police harassing "poorly veiled" women — even though Rouhani has expressed his disagreement with such actions — are perceived as the president’s failures. Indeed, Rouhani has so far not gone further than verbally criticizing these actions.

Finally, there is worry that state bodies that are beyond Rouhani's control will step up their efforts to sabotage him during the last year of his current term, so that public opinion will turn against the president.