The failed Turkish coup divided Gazans between supporters and opponents, as some praised President Recep Tayyip Erdogan for foiling the coup. 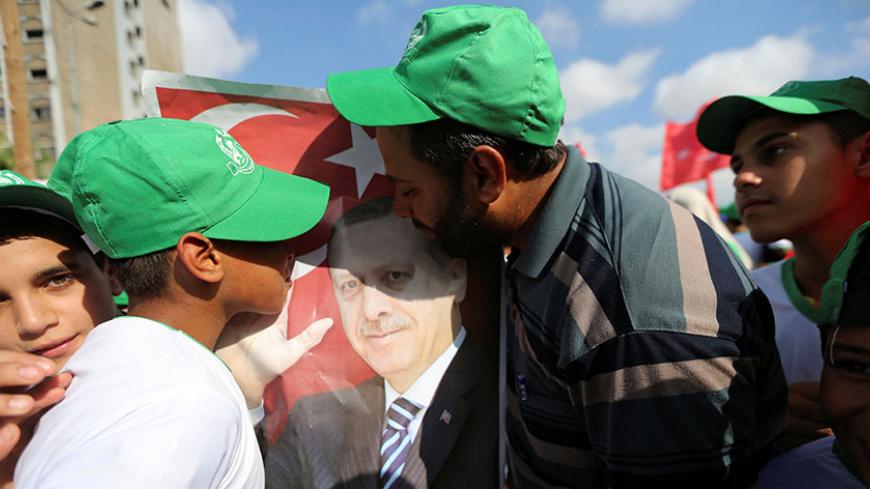 Although the Gaza Strip is not a state, military coups have constituted a part of its modern history and have left their mark on the daily lives of its inhabitants. Turkey's failed military coup July 15 did not pass unnoticed in Gaza; it stirred the memory of Gaza’s residents and divided them between supporters and opponents.

This was not the only coup that caught Gazans’ interest. The Gaza Strip also bore the brunt of the coup in Egypt on July 3, 2013, that led to the ouster of Egyptian President Mohammed Morsi of the Muslim Brotherhood. Egyptian authorities immediately took measures against Gaza, as Hamas, which controls the Gaza Strip, is affiliated with the Muslim Brotherhood. These measures included closing the Rafah land crossing for long stretches of time and destroying thousands of tunnels between the Egyptian and Palestinian borders.

The Hemaya Center for Human Rights had published in September 2013 a statement saying that “destroying the tunnels without offering a legitimate substitute is an actual participation in tightening the siege [on Gaza], prolonging it and increasing its pressure on the Palestinians, not to mention crippling the life of the inhabitants.”

Ever since, the crisis has escalated in unprecedented ways: unemployment has surged to more than 65% and Gaza’s economy is on the verge of collapse, according to World Bank reports, amid the halted reconstruction process and the extreme overpopulation in a surface area of 365 square kilometers (141 square miles) with roughly 5,000 persons per square kilometer (roughly 13,000 persons per square mile).

Despite the accumulating crises in the Gaza Strip, the Turkish coup attempt topped the headlines of local newspapers and social media networks. Ibrahim al-Madhoun, a political analyst who writes for Al-Risala newspaper, wrote on his Facebook page July 17, “Our interaction with Turkey’s coup is a bit exaggerated,” in reference to the attention it generated in Gaza.

Perhaps this major interaction stems from a previous experience with military coups.

Even though Hamas had won 76 seats out of 132 in the Palestinian legislative elections in early 2006, the security institutions affiliated with the Palestinian Authority (PA) remained under Fatah’s control. Consequently, tension rose between the security officers and the armed men of the executive power formed by Hamas at the time. The clashes peaked on June 14, 2007, when Hamas took control of all security locations in Gaza; 417 people died in the incidents. Hamas’ supporters still call this event “the military settlement,” while opponents call it “the coup.”

Writer Akram Atallah commented on the similarities between the Turkish and Gazan coups in an article in Al-Ayyam newspaper July 17. He wrote, “Gazans know what a coup means and are well aware of its results on the country, citizens and freedoms when arms rule. But, ironically, the supporters of a coup in Gaza strongly refused the coup attempt in Ankara, while the opponents of a coup here supported the coup in Ankara.”

The supporters of the Turkish coup at first believed that the collapse of the government of President Recep Tayyip Erdogan would shake Hamas. Mazen Ajour wrote July 15, “Hamas is teetering,” indicating that Hamas is losing most of its supporters in the region. On July 16, Rami Abu Shawesh posted the following message on his Facebook page: “A coup in Turkey and joy in Gaza.”

For his part, author Mahmoud Juda justified this support and wrote on his Facebook page July 16, “Some of the Gazans’ support for the coup against Erdogan irritated Hamas. In these Gazans' view, every supporter of Hamas [such as Erdogan] has contributed to the continuation of their suffering and has therefore conspired against them. [Based on that], they wished [that this supporter] be brought down every day, every moment.”

Hamas’ supporters hoped for Erdogan’s victory. Before the coup failed, Madhoun posted on his Facebook page July 15, “It is too early to interpret what is happening in Turkey. If Erdogan succeeds, he will become stronger than ever. If he fails, God forbid, the entire system will be convulsed.”

After the coup failed, he wrote July 16, “Fatah’s supporters had originally backed the failed coup in Turkey and were glad at the misfortune. Hamas’ supporters’ sadness and shock turned into joy.”

Hamas’ celebrations went beyond social media. Dozens of marches were organized, expressing happiness at the failed coup; images were seen showing Ismail Haniyeh, the deputy head of Hamas’ political bureau, carrying a cake decorated with an image of himself and Erdogan.

Activists have mocked these activities and Hamas' defending the democratic choice of the Turkish people, as Hamas has not taken part in legislative elections since the end of its legitimate rule in January 2010. Journalist Abeer Ayyoub asked on her Facebook page July 16, “Do those supporting the Turkish people’s choice dare to have their own choice in Gaza?”

On the Gazans’ interest in what is happening in Turkey, Ayyoub wrote July 17, “The Gazan street’s reactions to the failed coup in Turkey were greater than the [Gazan] street’s reaction to the death of three kids who were burned [because of a fire resulting from a candle] due to the power crisis in Gaza.”

Human rights activist Mohamed Abuhashem wrote on Facebook on July 17, “Imagine if the people in Gaza had taken to the street during the Hamas coup in 2007?!!! Not only the Turkish people are worth respecting … the revolutionaries too … who refused to kill their fellow citizens.”

Contrary to most of the political comparisons by social media activists, Taher al-Nunu, the spokesman for the former Hamas government, wrote on Facebook July 16, “I did not want to dwell on the past, but today is very similar to yesterday when the executive authority thwarted the 2007 security forces' coup and protected the people’s democratic choice.”

Sarcasm reached its peak in the response to the remarks of Mushir al-Masri, Hamas’ youngest member of parliament. He said in a speech July 16 during a march in Jabaliya refugee camp, in the northern Gaza Strip, that he is ready for the bloodshed on Turkey's shores. In response, images of people in swimming suits crowding the shores of Turkey circulated on social media.

Activist Faisal al-Rifai wrote on Facebook on July 17, “In light of parliamentarian Masri’s remarks, I would like to ask how we can accept a system of governance in secular Turkey and support the Turkish government that embraces such doctrine, while we reject the least secular aspects in Palestinian society, particularly in Gaza.”

The interaction and great interest in Turkish affairs are not spontaneous. Rather, they reflect Turkey’s strong role in the system of international balances and its historical impact on the Gaza Strip — going back to when the Ottoman Empire ruled Palestine from the early 16th century to the beginning of the 20th century.