Ending the Mavi Marmara crisis with Israel and extending an apology to Russia is not enough for a true change in Turkish foreign policy as long as it remains in the grips of Islamism and sectarianism. 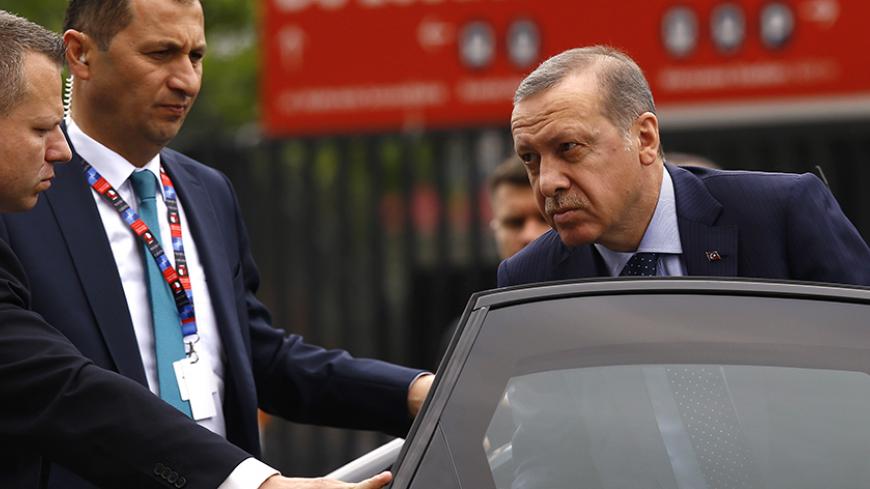 According to some Turkish and international observers, President Recep Tayyip Erdogan is making a U-turn from his confrontational foreign policy these days, moving to a more moderate one. The argument is based on two developments in June. The first is the agreement Turkey reached with Israel after protracted secret negotiations to restore bilateral ties, which had been in a state of a near cold war since the Mavi Marmara crisis in 2010. The second development is the letter Erdogan sent to Russian President Vladimir Putin apologizing for the November shooting down of a Russian fighter jet, which had allegedly violated Turkish airspace along the Syrian border.

Meanwhile, Erdogan is also making overtures toward Abdel Fattah al-Sisi's administration in Egypt, which he had declared "illegitimate" after Sisi's overthrow of President Mohammed Morsi and his Muslim Brotherhood government in July 2013, but these efforts have yet to bear fruit.

Erdogan's solutions with Israel and Russia are called "normalization" in the media. Hence, some argue Turkish foreign policy is changing, too, based on the assumption that ties with Israel and Russia have been normalized. But how much do the terms "normalization" and "change" correspond to the actual state of affairs? To make a reality check, let's use the two questions below and see whether one could answer them in the affirmative.

The available facts do not justify a "yes" answer to either question. One simply lacks the grounds to suggest Erdogan has abandoned his old "new foreign policy." The solutions employed to ease tensions with Israel and Russia are devoid of any content that heralds the emergence of "the newest foreign policy."

To use a metaphor, Erdogan's foreign policy today is a ship run aground — the result of the reckless adventure he and Davutoglu embarked on with great hopes in 2009. Moreover, the accident is not something new — the ship has been stuck for quite some time.

This failed policy Islamized Turkey's Western-oriented, secular and republican political culture, while seeking to reorder the Middle East under the leadership of "new Turkey." It bore the hallmarks of Islamist ideology, both in terms of content and style, and the line separating foreign policy from domestic politics became virtually nonexistent. The new regime was Islamist and pro-Sunni, both at home and abroad, and therefore it was anti-West. Pulling Turkey away from the West was in fact an objective the new foreign policy pursued. In this context, the suspension of reforms needed for EU membership was not a mere coincidence.

After the 2009 Davos incident, anti-Israelism became the engine of the new foreign policy, in which Hamas — an ideological ally of Erdogan's Justice and Development Party — was accorded the centerpiece. The drive culminated in the Mavi Marmara incident on May 31, 2010, but this climax proved to be also its dead-end.

Then, the Arab Spring came to the rescue. Erdogan and Davutoglu were simply tantalized by the rebellion against Bashar al-Assad's regime in neighboring Syria in the wake of uprisings in Tunisia, Egypt and Libya. Tempted to topple the regime and replace it with an ideologically friendly Islamist government, the duo embarked on a policy that was well over the head of Turkey's military, economic, diplomatic, academic, institutional and social capacities. The miscalculation stemmed from the false assumption that the Assad regime would crumble in months, if not weeks, which, in turn, was the result of poor knowledge, intelligence and analysis.

In September 2011, while Syria descended into chaos, Erdogan and Davutoglu officially made the lifting of the Gaza blockade a third precondition to resolve the Mavi Marmara crisis with Israel, in addition to apology and compensation. They were well-aware they could never get the blockade lifted, but what they really wanted was something else — to tie the solution of the Mavi Marmara crisis to the solution of the Gaza-Hamas problem, and thus make it virtually impossible. This was necessary in order to perpetuate the state of crisis with Israel, which promised political fuel for their dream of leadership in a bloc of Brotherhood-inspired regimes encompassing Tunisia, Libya, Egypt, Palestine, Syria and Turkey.

But that's all water under the bridge now. Erdogan no longer needs the crisis with Israel, for Sisi's coup in Egypt has destroyed his dream of a Brotherhood union and his proxy war in Syria has long proved unwinnable. Russia's military intervention in September 2015 was only the proclamation of Erdogan's irreversible defeat.

That's how Erdogan's Turkey ended up lonely and isolated in the Middle East. Deprived of dialogue channels, incapable of developing a new policy and with no room to sustain its existing one, it was immobilized by a self-inflicted paralysis.

So, the Israel and Russia solutions are an attempt to get the ship afloat again. Yet they remain tactical maneuvers aimed at damage control. There is no indication to suggest that a fundamental policy change is under way. Reading the "change" argument through the chain of values, principles and actors leaves no room for any other conclusion.

So what is actually happening? The deal with Israel became possible because Turkey dropped its condition for lifting the naval blockade on Gaza. Technically, it was Erdogan who made a concession. Israel had already extended an apology and will now compensate the victims' families. The two sides will exchange ambassadors. Turkey, meanwhile, has dispatched humanitarian aid to Gaza, via the Israeli port of Ashdod, consisting of items permitted by Israel.

None of these is an indication that Turkish-Israeli ties are on a normalization course. Normalization requires the establishment of a minimum level of mutual trust. Economic, diplomatic and military cooperation needs to be institutionalized and updated. Reining in the anti-Israelism in Turkey, which has become part of the country's new political culture and often borders on anti-Semitism, is also a prerequisite for normalization.

When it comes to Russia, normalization will take more than a Turkish apology and a compensation for the downed jet. That much could secure the return of some Russian tourists, of course, but economic and political ties will remain unsettled. For a true normalization, an explicit and fundamental revision in Turkey's Syria policy is a must, including an unequivocal end to Turkish support for jihadi groups, the restoration of border control and an unconditional struggle against the Islamic State. Turkey's Syria policy was the core cause of the Russian intervention in Syria; hence, no normalization should be expected unless this policy is fully abolished. Though certain signals to that effect have to be acknowledged, there is no indication that Turkey's support for jihadis has been terminated.

In sum, Erdogan is not changing his foreign policy — he is resetting it. Getting the foreign policy ship afloat is nothing but an attempt to reset — or jump-start — his pro-Sunni, Islamist agenda.

What Turkey needs is not a reset but a reformatting of its foreign policy — a reprogramming from A to Z. This means the dismantling of an extremely personalized Islamist and sectarian foreign policy and its replacement with a secular one that relies on the Foreign Ministry’s institutionalism and projects the classic values of modernity to the Middle East, namely human rights and democracy. With Erdogan in office, none of these can ever materialize.