Egypt to focus on cooperation with Italy

After months of a quid-pro-quo attitude between Egypt and Italy, Egypt's legislators have decided to use a carrot instead of a stick to resolve ill will over the slaying of Italian student Giulio Regeni. 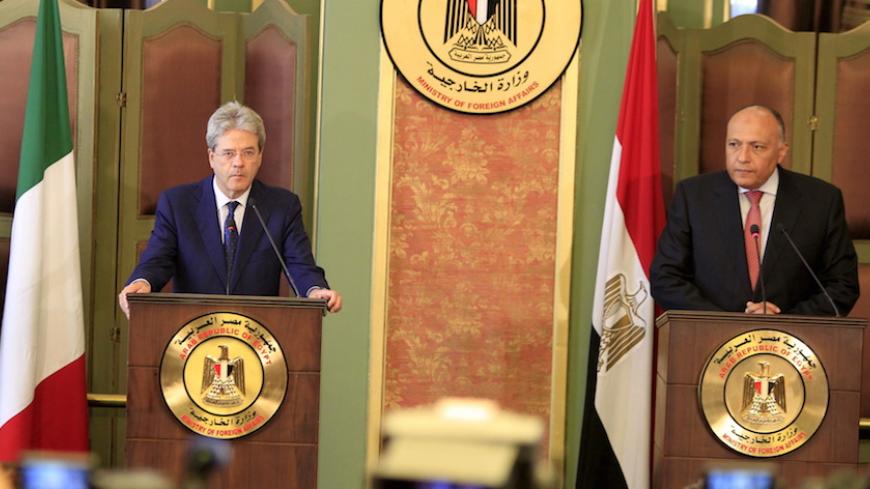 Tension between Italy and Egypt has escalated in the months since an Italian graduate student who disappeared from Cairo was tortured and killed, with both sides taking part in a series of retaliations. This week, however, the Egyptian House of Representatives decided to switch gears and take a less disruptive approach to resolving the controversy.

A special committee that was formed to follow up on the murder of Giulio Regeni — comprising members of parliament's defense, human rights and foreign relations committees — recommended July 18 that any future measures taken should employ “calm parliamentary diplomacy” instead of “confrontational diplomacy.”

Late last month, the Italian parliament passed “Regeni’s Amendment,” which accuses Egypt of failing to cooperate in the case, and voted not to provide Egypt with spare parts for its F-16 warplanes. In its first official reaction to the decision, Egypt’s Ministry of Foreign Affairs issued a statement July 6 expressing regret that Italy had passed the bill. The ministry said, “This escalation is not consistent with the current level of cooperation between the investigation authorities of the two countries since the accident was discovered. It also contradicts the mutual goal of countering terrorism, as it [the decision] will have a negative impact on Egyptian capabilities.”

The July 6 statement also indicated that “the last few months witnessed mutual visits between the Egyptian and Italian investigation authorities, as Italy received hundreds of documents and dozens of files related to the outcomes of the investigations, which the Egyptian authorities carried out with full transparency and cooperation.”

However, it appeared that Egypt’s Ministry of Foreign Affairs tried to exploit the death in Italy of Egyptian citizen Mohamed Baher as a response to the Italian position, expressing frustration that Italian authorities have not achieved any progress in that case. Baher's body was found May 3.

Based on successive statements issued by the ministry, it is also evident that Egypt has been attempting to use its international relations to pressure Rome.

The crisis of illegal immigrants — which has increased recently because of the ongoing conflicts in the Middle East — became an explicit threat to European countries. Italy has always been the door illegal immigrants have used to enter Europe. Egypt is using that issue as leverage.

Italian Senate Vice President Maurizio Gasparri had warned earlier that Italian Prime Minister Matteo Renzi has made irresponsible decisions with regard to countering terrorism. This indicates that Italy is fearful of the consequences that will follow if Egypt abandons the issue of illegal immigration, which is closely linked to the security of the entire European Union.

In an attempt to document its efforts in countering illegal immigration, Egypt’s Central Agency for Public Mobilization and Statistics (CAPMAS) issued a statement July 14 confirming that the number of illegal Egyptian immigrants in 2015 dropped 19% compared with 2014. The statement indicates the number of Egyptians who immigrated and acquired immigrant status was 409 last year, compared with 505 in 2014.

Italy ranks No. 1 in the number of Egyptian immigrants it receives, with 37.9% of Egypt's total.

Ambassador Naila Jabr, the head of the National Coordinating Committee on Preventing and Combating Illegal Migration, told Al-Monitor, “Egypt — in coordination with Rome, the International Organization for Migration and other countries — has been making considerable efforts in countering illegal immigration across the Mediterranean Sea in the last few years.”

Jabr said, “During the last four months, the border guards have managed to stop 5,076 illegal immigrants.”

“Every day, a voyage of [dozens] of illegal immigrants is aborted on the seashores of Alexandria, Kafr el-Sheikh or Mersa Matruh,” she added.

Moreover, Egypt is relying on another factor to pressure Italy that involves the number of Egyptians living in Italy. The Egyptian government strongly urges the estimated 90,000 Egyptians living in Italy to transfer their savings to Egypt instead of investing them in Italy. This, in turn, might directly improve the Egyptian economy; however, it would certainly not be in Italy's interest.

Within days of Egypt’s threat against Italy, Nabila Makram, the minister of immigration and Egyptian expatriate affairs, returned to Cairo after a long visit to Italy where she met with the Egyptian community and promoted the purchase of dollar certificates.

Egypt’s threat against Italy also indicated that the Egyptian government might stop cooperating with Italy on curtailing immigration from Libya. Egypt’s Ministry of Foreign Affairs said, "The cooperation with Italy on the exacerbating situation in Libya might witness a considerable decline.”

Abdul Sattar Hetieta, an Egyptian journalist specializing in Libyan affairs, highlighted another factor Egypt might use to pressure Italy. He told Al-Monitor, “Egypt is the [country] most connected to the Libyan crisis and the most influential party inside Libya, surpassing even Algeria and Tunisia.”

Hetieta said, “Egypt has intelligence cooperation with all the European countries, especially Italy, with regard to the Libyan affairs.”

He added, “Egypt has a favorable position inside Libya. Therefore, it has exploited its strong and special relations, especially in eastern Libya, with chieftains and military leaders to put pressure on Italy. However, it is the first time this has been publicly announced."

The Libyan expert emphasized that many European countries, especially Italy, rely on Egypt with regard to Libya given that Libya is considered a source of energy for some of these countries, as it provides them with natural gas through the Mellitah port in eastern Libya.