How these Egyptian women want to break the taboo over divorce

As divorce rates soar in Egypt, a women's magazine is setting up a program in support of Egyptian divorcees, offering them vocational training, counseling and a community of shared experiences. 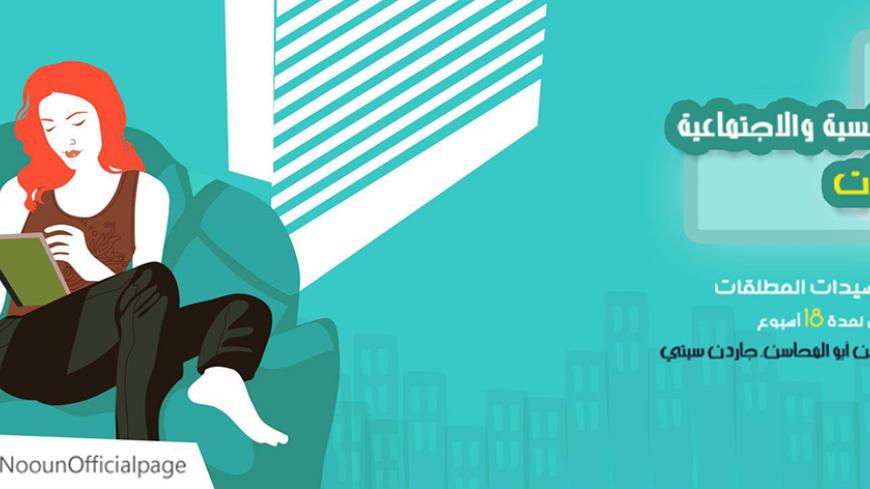 The official advertisement for the workshops held by Nooun magazine to help divorced women is seen in this undated photo. - Facebook/NoounOfficialpage

CAIRO — Increasing divorce rates in Egypt are accompanied by an increase in issues faced by divorced women, especially young divorcees. In this context, Nooun, a women’s magazine focused on social and humanitarian concerns as well as supporting Egyptian women, announced that it was holding the first session of a program to help divorced women in the first year following their separation. The session, “Managing psychological and social pressures for divorced women,” will open July 17 at Medrar, a nonprofit collective in Cairo.

The director of Nooun, Sandra Sleiman, told Al-Monitor, “Divorced women face many problems in Egyptian society, as they feel guilty that they failed to keep the house together and maintain its stability. Financial problems also burden them.”

Sleiman said that the idea behind holding a training program came with the continuous increase in divorce rates and the absence of an association to help divorced women adapt to their new life situation. “Most divorce cases in Egypt affect young women, who face hardships in coping with their new lives,” she added.

According to figures from Egypt’s Central Agency for Public Mobilization and Statistics, divorce rates increased by 10.8% in 2015 from the previous year to an estimated 200,000 divorces, most of which were settled out of court.

The agency's reports state that 2015 witnessed the highest rates of Khula divorce cases (those initiated by the wife seeking financial compensation from the husband). These cases made up 4,142 or 67.6% of 6,125 divorce cases that were decided by a judge in 2015. Meanwhile, divorce cases resulting from imprisonment of the husband recorded the lowest rates, with five rulings representing 0.08%.

Divorce most affected the age group of 25-30 years at 21.3%, while the lowest divorce rates, in the age group of 65 years and above, amounted to 0.7% of all divorce cases. In terms of education, women who stopped their studies after middle school suffered the highest divorce rates at 29.7%, while the women holding a higher university degree made up only 0.3% of all divorce cases.

Sleiman said that when the magazine advertised the program on its website, the response was bigger than they expected, perhaps because it was such an innovative idea. She noted that participation is not limited to any profession, level of education, age group or social status.

H.K., a divorced woman in her late 20s with one daughter, told Al-Monitor that the financial problem worried her most when she split up with her husband. She was left to care for the child alone, as her jobless ex-husband did not help in any way. Her relatives and colleagues would not stop asking about the reasons behind the separation.

She said that she took it upon herself to answer any distasteful question in a way that shut down any further discussion. She also provided her daughter with everything she needed on her modest salary.

S.A., a woman in her early 30s, said her marriage lasted barely 2½ years. Then she was left to take care of her son. What bothered her most at the beginning were the child’s questions about his father, such as, “Why don’t we see him?" and "Why doesn’t he live with us?”

She added that with time, she grew used to answering the questions by saying that the father was busy and that they would see him when he has the time.

Egypt's Personal Status Law grants women the right to child custody after divorce until a certain age. It also obliges the man to give his ex-wife part of his monthly salary to support his children. However, many men do not abide by this law and as a result, it is common for women to file for alimony in court.

Osama said that the most important part of the training is when women speak about their personal experiences and feelings about dealing with society. In these discussions, divorced women can speak freely without interruption. These sessions ease the burdens of women who think that their problems are the end of the world. They discover during the discussions that they are not alone.

Osama noted that the program aims to help divorced women get through this painful stage and go on with their lives. It makes them realize that divorce is not the end and encourages them to form new social circles. The sessions also offer psychological support and advice to divorced mothers on dealing with their children after the divorce.