Will Iraq's constitution be amended?

Iraqi parliament Speaker Salim al-Jabouri has formed a new committee for amending the Iraqi Constitution, but is it too little, too late? 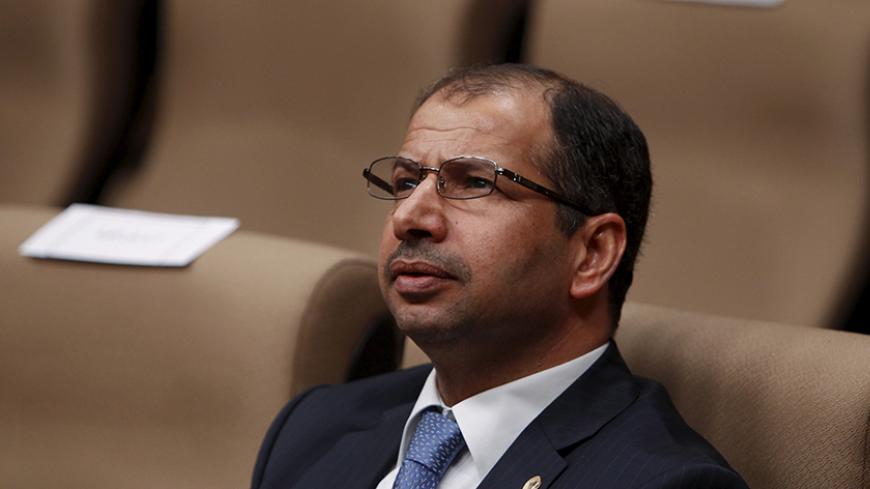 BAGHDAD, Iraq — Iraqi parliament Speaker Salim al-Jabouri suddenly announced July 17 the formation of a parliamentary committee tasked with amending the country's constitution. While this is not the first time that calls have been made to amend the Iraqi Constitution, no serious steps had been taken.

Although Article 142 of the constitution defines the mechanisms and methods for amending the constitution, differences have prevented the parliament's political blocs from doing so. They have not managed to reach the consensus required to hold a referendum on amendments to the constitution.

Surprisingly, Jabouri called upon the parliamentary blocs July 17 to field candidates for membership in the constitutional amendment committee amid a major political and popular split over several issues. Chief among these are reform, governmental change, the formation of regions, disputed areas, Federal (Supreme) Court matters, the provinces, oil and gas, the National Guard and the ongoing war with the Islamic State (IS).

The parliament's political blocs have different views regarding both the importance and timing of the formation of the committee and the articles that should be amended, especially considering that these blocs have come to know which articles and paragraphs have worked and which ones have not during the 11 years in which the constitution has been implemented. It should be noted that some articles still have not even been implemented yet. Chief among these is Article 140, which stipulates the normalization of the situation between Arabs, Kurds and Turkmens in disputed areas, such as the province of Kirkuk.

Raad al-Dahlaki, a parliamentarian for the National Forces Alliance and member of the Legal Committee, told Al-Monitor, "The task of drafting or amending the constitution is not the preserve of the political class alone, as this is an issue that involves society as well; hence the need for the constitutional amendment committee to include politicians, artists, athletes, actors and other segments of society so that the constitution could truly reflect the community."

Dahlaki said that the constitution needs amendment at the level of the "transitional articles, and the articles that define the identity of Iraq must be revised so that Iraq's Arab identity is ensured. Also, the powers of the prime minister should be reduced and divided between the president and the speaker of the parliament.”

Reform Front parliament member Muhammad Saihood said the attempts to amend the constitution have repeatedly failed due to the sectarian quotas that are behind all of the country's problems. Saihood told Al-Mada Press on July 20, "The Front is behind the idea to form a committee to amend the constitution. This time around, we will not let those seeking to take quotas obstruct our work and the amendments will pass because the front enjoys a majority in parliament."

"There are controversial articles such as Article 140, which is related to Kirkuk, and others related to the method of forming regions, the powers of the president, the sharing of financial resources, the sharing of power, the law of provinces, the issue of multiple citizenship and the personal status law."

The Kurdistan Alliance bloc opposes amending the constitution despite its desire for at least Article 140 to be amended. The article provides for the holding of referendum in Kirkuk to have it annexed to the Kurdistan region by the end of 2007; however, some believe this date needs to be changed as it is badly outdated.

Zana Roustaa, a parliamentarian with the Kurdistan Alliance bloc who was nominated for the membership of the Iraqi constitutional amendment committee, told the Rudaw network July 18, "Some Arab parliamentarians are proposing to amend the Iraqi Constitution, which provides for a good part of the rights of the Kurdish people."

He indicated that some believe the Kurds have too many rights "and are asking for the amendment of the constitution out of regret" of the rights' being granted. He said Kurds oppose any alteration of their rights, and as a result, "The Kurdish blocs do not want the constitution to be amended."

This all requires from the parliamentary constitution amendment committee a great deal of time, a set of political compromises and perhaps a series of historical compromises that would have to enjoy popular near unanimity at a time when the conflicting parties in Iraq do not seem to be willing to make such compromises.