Following the Syrian Democratic Forces' announcement of the battle to restore the city of Manbij, the number of displaced from the IS-controlled areas continues to increase. 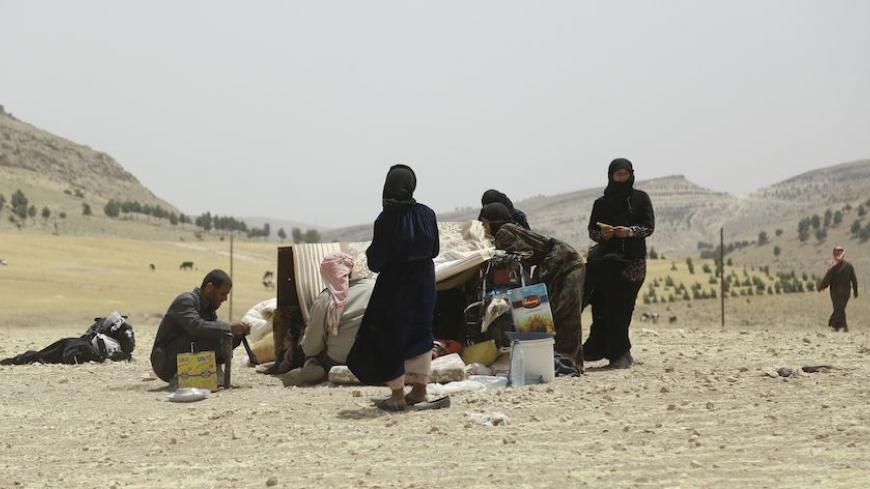 Syrian families who fled an assault launched by Arab and Kurdish forces against the Islamic State in Manbij arrive at an encampment 20 kilometers (12.5 miles) from the city center, June 4, 2016. - Delil Souleiman/AFP/Getty Images

GAZIANTEP, Turkey — Residents of Manbij, in Aleppo's countryside, tell of heinous crimes and difficult living conditions at the hands of Islamic State (IS) fighters. The residents say that the number of people who are stuck in IS-controlled areas and who wish to escape is much larger than those who managed to flee.

Hussein al-Awad is one of those who fled and recently made it to the Aleppo Road, located south of the city and currently under the control of the Syrian Democratic Forces (SDF). He told Al-Monitor about his older brother Abdullah who decided to leave Manbij, where fierce battles have been taking place since May 31, accompanied by their neighbor Abdulaziz Abu Ahmed. On July 1, they took a side road in order to reach the area controlled by the SDF.

Awad said that his brother and neighbor left their homes at midnight, as “this is the time when IS troops change shifts. We did not hear from them for three days until we learned that they were shot by an IS sniper on July 4.”

This news did not stop Awad and his family to try leave the IS-controlled area. “We are dead either way. Had we stayed in Manbij we would have met our death in a missile bombing, a suicide attack or in an attack by a sniper. At least if we escape we had a chance to reach safety,” Awad said. On July 15, Awad and his family managed to reach the Hazwanah neighborhood, south of Manbij, which is under SDF control.

Al-Monitor spoke with Maryam Ismail, 22, another resident from Manbij who had left. She said, “When I set foot in the liberated Kharija neighborhood, I took off the burqa that was mandatory for women living under IS control [since 2014]. My parents gave me the freedom of choice.”

Ismail now wears a blue shawl that covers her hair and lives with her family. Her father and her brothers did not object to her decision to take off the black burqa. “I love blue. It is the color of the sky, the sea, love and peace,” she said.

Not much news is coming from the IS-controlled areas, save for the posts on the websites and social media pages that IS operates or by people having fled the areas.

Mohammed al-Ali, a man in his early 40s, managed July 10 to reach the SDF-controlled Aleppo Road. He said that he was attending Sharia sessions organized by the IS-affiliated preaching and advocacy office.

“The majority of the residents living in IS-controlled areas are forced to attend Sharia courses and seminars, especially those who commit an offense or protest against the organization’s laws and of course the people who have not pledged allegiance to it,” he told Al-Monitor.

Another resident who fled Manbij with her family said she did so out of fear that her sons would join IS ranks. Khadija (a pseudonym) told Al-Monitor that her sons who are 10 and 15 had started to be influenced by the IS discourse. “My sons would go regularly to the Sharia school in the city, listened to the sermons of the preacher at the mosque and committed to religious classes. They argued with their father about the Islamic jurisprudence and the need to implement Islamic law. This is why I convinced their father of the need to flee Manbij and save our children from this extremist ideology,” she said.

IS has turned schools into its headquarters and prisons, prevented the official school curriculum from being taught and required that the students attend religious courses. On how to deal with youths and children, particularly those who attended the Sharia classes, Farouq al-Machi, the head of the administration of the city’s civil affairs, which was formed by the Manbij Military Council, told Al-Monitor that his administration is seeking “to open mental hospitals to provide them with treatment, as well as rehabilitation programs focusing on these children and others who were also influenced psychologically by IS.”

IS has control over all life aspects in its area of influence and spreads terror among the people through executions and prison sentences, which have prompted some people to cooperate with the jihadi group. In regard to the fate of those still in Manbij who supported and cooperated with IS, Machi said, “They will be referred to fair local popular courts. As for those who committed crimes of murder, their sentences will increase twofold.”

The SDF reports that the major challenge lies in spreading trust among civilians and bringing them back to their homes. Shirvan Darwish, the official spokesman for the Manbij Military Council, told Al-Monitor that his forces freed thousands of civilians in the countryside of Manbij, and that more than 30,000 people have fled the city recently during the battles.

He said, “They are in desperate need for aid relief. They need health care, food and a safe haven, which local communities cannot achieve on their own.”

Darwish demanded that international institutions assume their moral and legal obligations in this regard. He added, “We must assist the local communities to obtain what they lack by pressuring neighboring countries, especially Turkey and the Kurdistan Region, to open humanitarian corridors.”

He added, “The issue is not limited to the liberation of cities from terrorism. It also requires that the concerned countries and organizations provide civilians with basic necessities at the same time as the liberalization of the cities and towns from the scourge of terrorism.”

The battle for Manbij started more than a month and a half ago, yet conflicting parties have not resolved military operations so far, given the presence of nearly 125,000 civilians who are besieged in the fighting zones.