Syrians describe 'most dangerous journey ever' fleeing IS territories

Civilians in areas under IS control are barred from leaving, but many are nonetheless risking their lives to flee the group's grip. 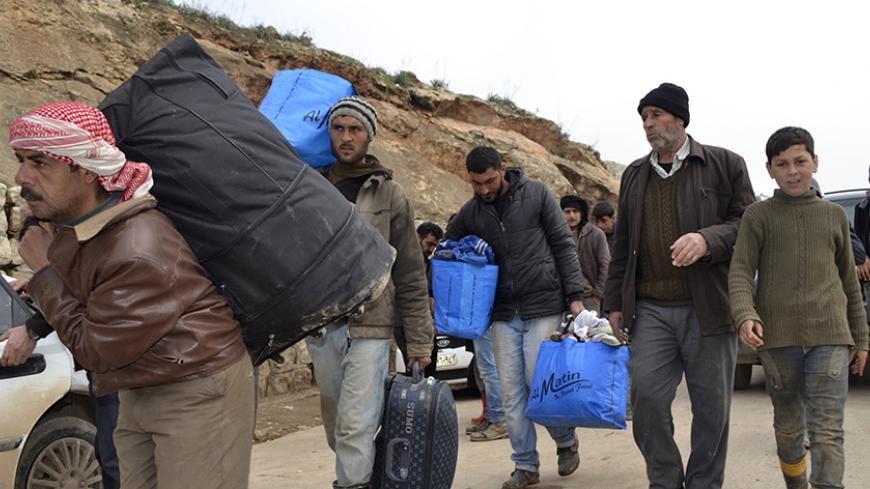 Syrians carry their belongings at the Syrian border crossing of Bab al-Hawa on the Syrian-Turkish border in Idlib governorate, Jan. 21, 2015. - REUTERS/Abed Kontar

ALEPPO, Syria — “It was the most dangerous journey ever,” said Abu Alaa (a pseudonym), describing his trek, which ended in the northern Aleppo countryside in an area controlled by the Free Syrian Army (FSA). He arrived in Khalfatli, a village about half a mile from the Syrian-Turkish border, after having lived for two years under Islamic State (IS) control in the city of al-Bab.

Since November 2015, IS has prevented civilians from leaving areas it holds to limit displacement to territories held by the FSA, the Bashar al-Assad regime or the Kurds. To escape IS surveillance, civilians take unauthorized roads late at night and try to reach their destination at sunrise. The typical journey is extremely dangerous, requiring travel through areas laid with land mines as well as some experiencing fighting between IS and the FSA.

On May 20, at sunrise, families began arriving in Khalfatli, to the west of villages controlled by IS. All of them were visibly fatigued following an arduous journey by foot. Still living in fear, none would agree to speak to Al-Monitor with the exception of one person. Perhaps they were concerned for relatives still living in IS-held areas. Abu Alaa, the boldest among the group, shared his experience with Al-Monitor.

“My heart sank all the way, fearing that [IS] knows about us,” he said. “We planned this journey a month ago. We walked for two hours. They were the longest of my entire life.”

Explaining why he had fled, Abu Alaa said, “Life has become like hell in IS-controlled areas. Apart from interference in the smallest details of our lives — whether our clothes, shaving, customs and traditions — the regime shelling and US-led coalition airstrikes also made our life even darker.” IS-controlled areas have been the target of airstrikes by the Syrian regime, the US-led coalition and Russia, which entered the Syrian war in September.

The Syrian Network for Human Rights (SNHR) has accused the Assad regime of targeting civilian areas in IS-controlled areas. It said that the regime carried out airstrikes against Raqqa, an IS stronghold, on March 18 and 19, killing 32 civilians, including six children. The targets were civilian areas, with no military or weapons facilities in the vicinity.

Although the US-led coalition has caused the fewest deaths among civilians, on May 21, 10 people died in coalition attacks on Arshaf, a village in the Aleppo countryside. According to SNHR, from September 2014 until Feb. 13 of this year, 267 civilians were killed in coalition strikes.

Abu Alaa hails from al-Bab, northeast of Aleppo in Aleppo governorate, which has been under the heaviest regime and Russian airstrikes, particularly since January, when regime forces began advancing in eastern Aleppo.

Abu Alaa said, “Since the regime reached the Kuweires military air base and battles broke out there, my city has come under daily shelling, which further prompted me to flee the IS area. Life has become unbearable there.”

For purposes of security, the FSA checks the IDs of all civilians fleeing IS. It moved the internally displaced persons arriving in Khalfalti to camps in the northern Aleppo countryside, supervised by humanitarian organizations, including IHH (the Humanitarian Relief Foundation), the Turkish nongovernmental organization. Al-Monitor spoke via Skype with Ahmad Mohamad, an activist with the Aleppo-based Syrian Institute for Justice, for additional information. Mohamad has been in Turkey since he fled his hometown of Manbij after IS took control of it in January 2014.

“IS has planted land mines along dividing lines with the FSA,” he said. “This is the biggest danger. Dozens of civilians were killed by land mines while fleeing IS areas, including a family of nine that I knew.”

In order to avoid the minefields, civilians pay large sums of money to smugglers. “The people are used by the smugglers,” Mohamad said. “They pay up to $400 per person to be guided along routes that are not surveilled by IS and are free of land mines.”

Mohamad added, “Those caught fleeing IS areas will be investigated by IS and incarcerated for a period of time. Yet the smuggler will get the harshest punishment. He will be fined large sums and imprisoned for a long time.”

Civilians in IS-controlled areas feel like they are living in a large prison. For them, the only way to escape this hellish reality is to put their lives in even greater danger while leaving behind their homes, livelihoods and relatives.