Can US-backed offensive bring back residents to Syria's Manbij?

The citizens of Manbij, which is northeast of Aleppo, have high hopes of returning to their hometown in light of the US-backed offensive against the Islamic State in their city. 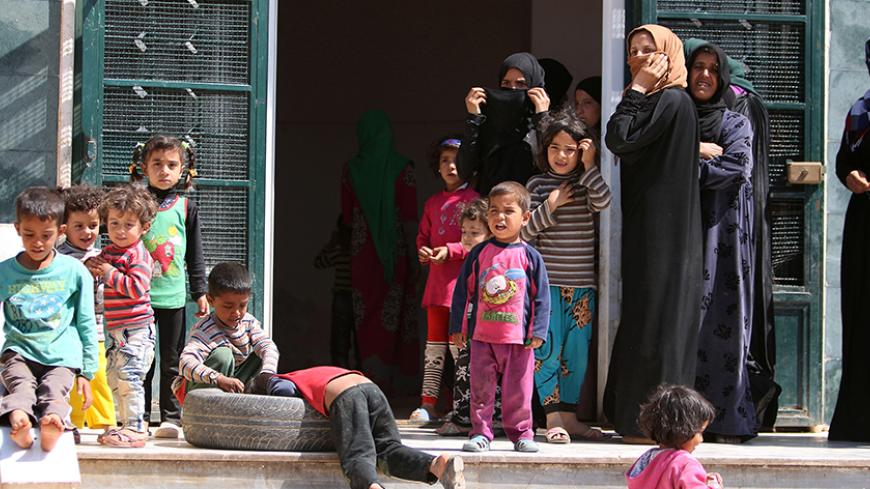 Women and children who fled Manbij stand at a doorway after arriving in areas that the Syria Democratic Forces alliance took control of on the outskirts of the city in Aleppo province, June 8, 2016. - REUTERS/Rodi Said

GAZIANTEP, Turkey — From Sanliurfa in southern Turkey, Amina Mesto follows closely the latest news from her hometown, the city of Manbij, about 50 miles to the northeast of Aleppo. Since early June, fierce clashes have flared up there between the Islamic State (IS) and the Syrian Democratic Forces (SDF) backed by the US-led coalition that has placed the city under siege.

Amina, a Kurdish woman in her mid-40s, fled her hometown two years ago following IS' invasion. She told Al-Monitor that she knows nothing about the fate of the rest of her family, including her mother and older brother and his family, who preferred to stay in Manbij. She fears they will have a hard time fleeing from IS-controlled areas to the Turkish border.

Mohammad Cole and his wife, who are Turkmens, were forcibly displaced from Manbij two years ago when IS imposed its radical laws and regulations in their hometown.

They have decided to renounce the idea of traveling to another European country. The news on military clashes between IS and the SDF on the outskirts of Manbij has given them hope that they may soon return to their homeland.

Cole told Al-Monitor that he preferred to return home rather than travel to a country in Europe. "All my family and my relatives are there. All of my memories are there. I will surely return to Manbij immediately after its liberation," he said.

Nawaf al-Salem, a man in his 70s from an Arab tribe in Manbij, lives with his family in the city of Kilis, which is adjacent to the Syrian border. Salem left Manbij when IS controlled the city as he feared for his young children who refused to pledge allegiance to IS and join its ranks.

He told Al-Monitor, "Sometimes I feel overjoyed when I hear news about the battles and progress by the Syrian Democratic Forces toward the city. But I'm afraid that if the war continues it will be impossible for us to return [to our city], as is the case in other parts of the country," in reference to the war in Syria between the regime and the opposition that has been raging for more than five years.

These refugees' desire to return home might not be fulfilled quickly due to the ongoing conflict between the military forces fighting in Aleppo and its northeast countryside. Hundreds of civilians are fleeing hot spots on a daily basis as a result of violent battles between IS and the SDF on the one hand and between IS and factions of the Free Syrian Army (FSA) on the other.

The United Nations Office for the Coordination of Humanitarian Affairs (OCHA) issued a report June 6 saying, "A US-backed offensive to retake the IS-held northern Syrian city of Manbij has displaced some 20,000 civilians and could uproot about 216,000 more if it continues."

The US-led coalition is supporting the SDF — a coalition of Arab and Kurdish factions, largely composed of the Kurdish People's Protection Units (YPG) — in their battles against IS in northern Syria.

When the SDF launched the operation to liberate Manbij on May 31, SDF units reached the borders of northern Manbij and managed to completely surround the city from the eastern, northern and southern sides. They also cut IS' supply route from its Syrian stronghold of Raqqa, all the way to Jarablus on the Turkish border.

Shirvan Darwish, spokesman for the Military Council of Manbij, which is leading SDF operations there, told Al-Monitor, "Our troops have advanced and are able to target IS terrorists within the city. We are expected to storm the city, but we will make sure not to target civilians."

He added, "The day following the liberation of Manbij, our mission will be limited to protecting the city and our operations will be concentrated at the military fronts. Manbij will be completely handed over to a civilian administration tasked with communicating with all of the cities' components, as well as its political, tribal and social elites in order to form a local council."

Wael Sawah, an opposition member and executive director of the Syrian civil society organization The Day After, questioned Darwish's statements and told Al-Monitor, "In an ideal world this would be a beautiful speech. It is the best option for all parties and if the Syrian Democratic Forces are able to implement it, this will be an ideal model for the other parties."

He added, "The situation on the ground is different, and I fear that the promises of the Syrian Democratic Forces serve only as media material. Unfortunately the experience of the war in Syria has led to different outcomes: Each force has kept its power over the geographical region it occupies."

Sawah called on the SDF to hand over Manbij to a new local council made up of citizens to manage the city's affairs. He also demanded these forces, after liberating the city from IS, stay there for defense purposes.

He said, "Syrians in several areas have proven their ability to manage their own affairs if they are left alone without regional intervention and without the presence of foreign fighters imposing their radical vision."

Farouq al-Mashi, the head of the Manbij civilian council, told Al-Monitor that the biggest challenge after liberating the city will be to bring back civilians and the displaced. He said, "Rebuilding trust among the people is as important as bringing them back. We will also aim at rehabilitating the infrastructure including hospitals, power and water plants and schools."

IS controls all aspects of life in areas under its grip and fuels the feeling of terror among people through executions and punishments. This has pushed many to cooperate with IS. On the fate of those who choose to remain in their city and fight alongside IS, Mashi said, "They will be referred to local public courts. Those who committed murders will face a tougher sentence."

IS turned schools into centers and prisons under its command. It prohibited the implementation of the official Syrian school curriculum and obliged students to undergo religious education. On how to deal with children, especially those who underwent Sharia courses, Mashi said, "We will open special psychology clinics to treat them and will design programs to rehabilitate those children and others who were psychologically influenced by IS."

It is noteworthy that around 120,000 people lived in Manbij before the outbreak of the Syrian war. One-third of them were Kurds, while most were Arabs, in addition to some Turkmens and Circassians. Around two-thirds of the city's residents refused to live under IS' rule and fled to Turkey.