How Bibi turned media wrath from a curse into an asset

Prime Minister Benjamin Netanyahu is always complaining about the press, allegedly against him, while promoting his own freebie newspaper. 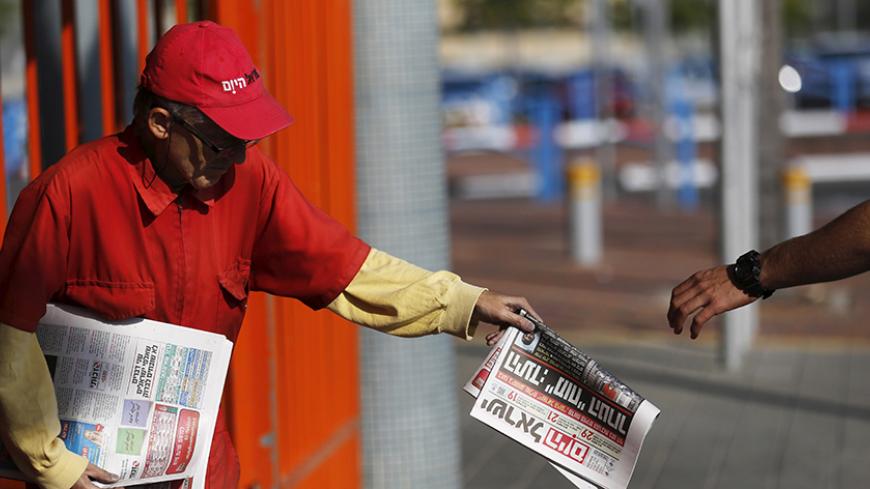 A man distributes the daily newspaper Israel Hayom at a train station in the southern city of Ashkelon, Israel, Nov. 19, 2015. Since 2007, US casino billionaire Sheldon Adelson, a major Netanyahu supporter, has published a free handout called Israel Hayom, which has become the nation's most circulated newspaper. - REUTERS/Amir Cohen

Prime Minister Benjamin Netanyahu has a point. The mainstream Israeli media loathes him and wishes for his downfall. Senior analysts seek flaws in his actions. Leading opinion writers find fault with his decisions. The media's attitude toward Netanyahu is reminiscent of the joke told about a Washington Times report that former President Bill Clinton's boat had sunk in the ocean and that he had walked on water all the way to safety. The headline of the report screamed, "Bill Clinton can't swim."

Here are two fresh examples of good news in the diplomatic arena for which Netanyahu did not get an iota of credit. Except, of course, from his cheerleading Israel Hayom newspaper, to which we will get to back later.

For the first time in the history of the state, a delegation of Saudi academics and businessmen, headed by the director of the Institute for Strategic Studies, retired Gen. Anwar Eshki, openly visited Israel. In addition to meetings with government officials — Director General of the Foreign Ministry Dore Gold and the Coordinator of Government Activities in the Territories, Maj. Gen. Yoav Mordechai — delegation members met with a group of lawmakers from the Meretz Party and Zionist Camp, and even had their photo taken with them. A visit by Saudi citizens to Israel, officially considered an enemy state, could not have taken place without the blessing of the royal palace. If former President Shimon Peres had been sitting in the prime minister's chair, his name would have made banner headlines about "a breakthrough in relations with Saudi Arabia." Netanyahu's name was sidelined, along with reports about the special visit.

That same week, on July 20, Gold inked an agreement renewing diplomatic ties with the Republic of Guinea (Conakry), the first country to sever relations with Israel after the 1967 Arab-Israeli War. The echoes of the criticism directed at the Netanyahu government's settlement policy by the Middle East Quartet (does anyone remember that report?) must have missed Conakry. True, Guinea carries little diplomatic and economic weight, but given the international boycotts and condemnations of Israel, is the expansion of its diplomatic circles not worthy of a fleeting pat on the shoulder of the prime minister, who is also the foreign minister? This time, too, Netanyahu was forced to make do with a flattering report and large photo in Israel Hayom.

With the hand of a consummate PR artist, Netanyahu has turned the media's alleged hatred against him from a curse into an asset. Not only do the slings and arrows of criticism whiz over his head, they help him portray himself as a persecuted underdog.

Thus, Netanyahu had used "freedom of expression" in the same way he treated "freedom of construction." The prime minister turned himself from victimizer to victim: He announced in April 2016 the establishment of a new Jewish neighborhood in the heart of the West Bank, came in for a hail of criticism from the political left and condemnation by the international community and then portrayed them as traitors and hypocrites. Such was the case when the prime minister came out with the decision to put off the launch of a new public broadcasting corporation, causing damage to hundreds of employees and the state coffers in the process. He came under fire from all directions and then portrayed his opponents, among them some Cabinet colleagues who expressed concern for freedom of the press, as lacking integrity.

"It doesn't square with their attempts [reference to a bill on limiting printed cost-free press] to shut down Israel Hayom at any price. [That's] not exactly freedom of the press, so it looks like they are motivated by other considerations," Netanyahu stated.

Regarding that last sentence, it is worth reminding the prime minister that people who live in glass houses shouldn't throw stones. The proposed legislation regarding Israel Hayom did not seek the closure of the free daily newspaper, but only called for banning its free distribution. The economic threat to other Israeli newspapers by the freebie, which is funded by the money that gamblers lose at casinos owned by Netanyahu's patron Sheldon Adelson, is one of the reasons for Israel's decline in the Freedom House freedom of press rankings. Israel's status was downgraded this year from "free" to "partly free." Freedom House, the US organization that ranks freedom of the press around the world every year, gave Israel 32 points out of 100 — ranking it 65th out of 200, the lowest grading Israel has received since the index was launched in 2003.

The second reason for Israel's downgrading, as cited in the report, is the expansion of paid content (native advertising) by private firms and government offices into the content pages of newspapers and news sites in the guise of news. In this regard, authors of the index singled out the Ynet website, owned by the Yedioth Ahronoth Group.

On July 20, the Knesset voted on a preliminary version of proposed legislation initiated by Knesset member Micky Rosenthal of the Zionist Camp, which was designed to fix these distortions. The proposal included a requirement of transparency that would enable the reasonable consumer to understand that some content includes advertisements masquerading as news. Despite Netanyahu's support, and perhaps because of it, 48 Knesset members voted against the law and only 28 voted in favor.

Just as Netanyahu argued that he does not believe his detractors on the issue of the new public broadcasting corporation were guided by principles of press freedom, so opponents of the proposed bill did not believe that his support stemmed from concern for the needs of the media. The prevailing wisdom in the Knesset and the media has it that Netanyahu was motivated by the desire to hurt the wide-spread Yedioth Ahronoth, and to turn Israel into an Israel Hayom state.

"Not everything that Netanyahu supports is automatically flawed," Rosenthal said after his proposal fell through. Nonetheless, Netanyahu deserves this reputation. The image of the Netanyahu couple as a punching bag for the "leftist media" he despises helped elect him to office four times and hold on to the job of prime minister for almost 10 years.

If the law enforcement and legal systems don't get in his way, Netanyahu has an excellent chance of winning the public's trust for a fifth term — a public which, paradoxically, has lost its faith in the purity of its leader's motivations and the sincerity of his intentions.