Energy expert Tatah Lehbib is putting his college education to use at home, combining old and new building methods and materials to improve housing conditions for refugees in Algeria. 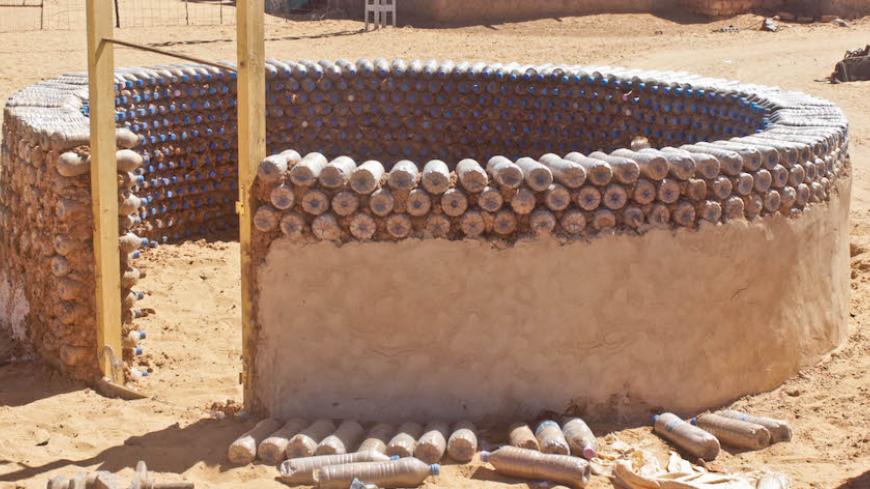 TINDOUF, Algeria — For 40 years, the harsh Hamada desert in southwest Algeria has punished Western Sahara refugees with its merciless environment. One man thinks it's finally possible to change that situation.

There is little available in the camps from which to build durable shelter; adobe houses and tents are all the refugees have been able to erect. But Tatah Lehbib is demonstrating what he says is a viable alternative that is stronger and more affordable than mud bricks.

Lehbib earned a master's degree from the University of Las Palmas de Gran Canarias, where he specialized in energy efficiency. He got his bachelor's degree from the University of Tlemcen in Algeria, where he studied renewable energy. Lehbib has been living with his grandmother in a Tindouf camp. As a child, he went to school there even when temperatures exceeded 50 degrees Celsius (122 F) and played barefoot in the dusty streets. As a university student, he would return home in the searing summers.

“When I started my undergraduate studies, I began dreaming of constructing a home that resists heat, rain and storms," he told Al-Monitor. Lehbib was granted a full Erasmus scholarship. By the time he was researching his thesis, which focused on the suffering he and his grandmother endured, the refugee camps were struck by the heaviest rain in four decades. “I had to include that catastrophe in my research as well," he said.

The refugee camps' infrastructure is a main concern, particularly after floods destroyed thousands of homes, forcing people to take shelter uphill and watch their belongings vanish. However, as soon as the crisis passed, people had no choice but to rebuild with the same mud bricks they had seen melt before their eyes.

Lehbib is taking a totally different approach based on science. For a month he has been building a house of plastic bottles filled with wet, compressed sand. “When I first started building, people thought I was crazy," he said. He hopes to reach his goal by establishing a scientifically designed plan. Many of the existing houses trap the heat inside, as they were built without an understanding of ventilation. Since hot air rises, "there must be a window in the roof to let it out."

Tatah collected most of the materials he uses from garbage. The round room he is building is half finished, with 1,300 bottles. This kind of alternative housing has many benefits, especially in a desert environment, he said. The shape will help lessen the heat, because air circulates naturally around the circular design, and the construction requires less water. It also puts otherwise wasted plastic to good use. And, he said, “One plastic bottle is stronger than 20 mud bricks — it bounces when you drop it, but bricks break apart.”

The creative refugee said he does not get financial support, and so everything is done using the simplest means possible. “My professors have taught me that every single nation has gotten along with the little they had, whether by digging caves or something else," he said.

The round-house bottle approach is apparently new to the Sahrawi society. In his neighborhood and even throughout the camps, no one has adopted the idea. He thinks that “as long as they do not see it completely decorated and polished, they won’t dare to follow suit.”

Most of the people seem to prefer staying in their comfort zones.

Regardless, Lehbib keeps defying the odds. While others are unable to buy cement to fortify mud walls because of the lack of resources, he has invented a new mixture made out of trash and some natural additions. “I went to the carpenter and took the wood waste, found an outdated natural hydraulic lime at home, and mixed them with yellow and red sand and charcoal ashes," he said. He demonstrates by pouring water on the mixture to show how consolidated it is. The hybrid literally shields the plastic building. His selection of materials is practical: Sahrawis make tea every day on coal, carpentry is a craft practiced in all local markets and lime is one of the cheapest items to buy.

Despite the skepticism surrounding this project, Lehbib is interacting a lot with his neighbors. He is using their water tank, and they constantly give him bottles.

During Ramadan, Lehbib is one of very few people working, and he has cut back in observance of the holy month. “I reduced my working hours; they were eight, and now I am working in the mornings only," he said.

He can be found filling empty bottles in his turban and shorts, under the shadow of a blanket hanging on a fence. He talks about the importance of this project and says it is based on a spirit of cooperation. The collaboration really became evident when many people started sharing pictures of the building online and offline as they helped with the construction.

The cohesiveness of the architecture is essential. From the inside Lehbib will sew the bottles with thread to create a net to keep everything well-connected.

His ambition goes beyond the plastic house. He also has a vision to improve mud bricks. At his house, he has planted a cactus tree that he said produces an “adhesive liquid.” According to Lehbib, in Mexico people put the substance in a barrel of water to "brew" it, then they make brick with it. The bricks become waterproof. The goal is to provide a stronger alternative for thousands of families whose houses are devastated every time it rains.

It is clear that Lehbib will need to spread such knowledge. “I will be more than happy to help others establish those houses and even form a specialized group" toward that end, he said.