Despite the wide Western condemnation of the two latest terror attacks in Turkey, President Recep Tayyip Erdogan is pointing the finger of blame westward in accordance with his party's narrative of persecution and defiance. 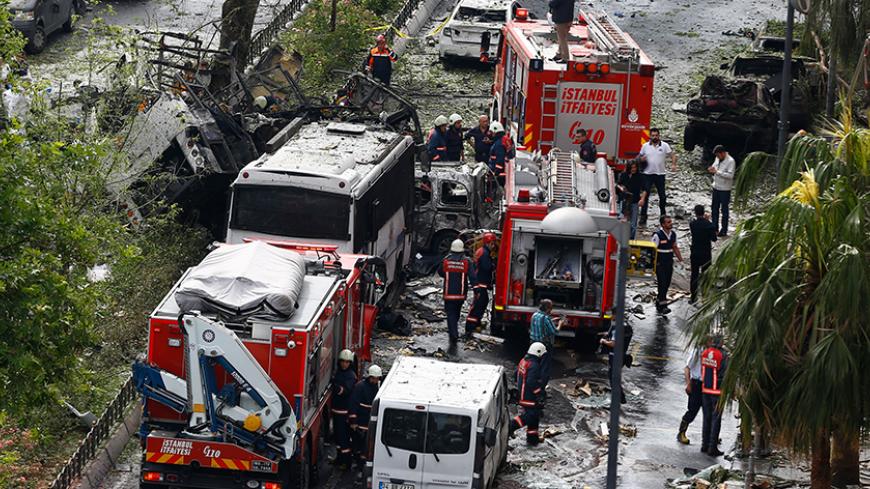 Fire engines stand beside a Turkish police bus that was targeted in a bomb attack in a central Istanbul district, June 7, 2016. - REUTERS/Osman Orsal

Turkey has been hit again by another wave of terrorism. On June 7, a busload of police officers was hit on a busy street in Istanbul’s tourism center. The next day, while the Turks were still reeling from the trauma of the Istanbul bombing, the country woke to the news of another attack that targeted the security headquarters in Midyat, once a symbol of Syriac identity and still a popular tourism spot with its historic old town and numerous Eastern churches.

The Istanbul terror attack was claimed three days later on June 10 by the Kurdistan Freedom Falcons (TAK), considered a breakaway faction of the Kurdistan Workers Party (PKK). For those closely monitoring the PKK, the claim is rubbish. It is a Middle Eastern tradition that whenever an organization does not want to claim responsibility for a controversial action so as not to endanger its credibility with certain influential countries or individuals, responsibility is taken by so-called breakaway elements. TAK is no exception to this rule.

The Istanbul attack is the 10th attributed to TAK since the name was first heard in 2007, the fifth since the collapse of the peace talks between Ankara and the PKK, and the third in 2016.

Now, everybody is realizing that these terror attacks will not be the last in the deadly cycle of violence gripping Turkey. Outrage against terrorism is coupled with helplessness in Istanbul and Midyat. The outrage is natural, but the feeling of helplessness is dangerous in Turkey's polarized society.

While the public was in shock with the magnitude of violence at the heart of Istanbul, that evening President Recep Tayyip Erdogan gave his angry reaction. On the second day of the holy month of Ramadan, Erdogan, speaking in his lavish palace in Ankara during the iftar dinner breaking the fast, pointed the finger of blame at the West.

He made reference to the mainly British and French occupation forces in Istanbul following the armistice declared at the end of World War I. The capital of the once-mighty Ottoman Empire was under joint British-French occupation and remained so until 1923, when the foundation of the Republic of Turkey was laid over its ashes.

Erdogan, alluding to the PKK, claimed, “Those who came with aspirations of occupying Istanbul now are using the terrorist organization as a tool. They wish to complete their unfulfilled dreams at the time of the Crusades, today with terror.”

The time difference between his two references is almost 1,000 years. He found the lowest common denominator between these two historical periods: the West trying to conquer or dominate Muslim lands and Muslims.

Those Turks who did not hear their president’s remarks blaming the West for the terror attacks on June 7 learned soon enough by reading the newspapers on June 8. However, the newspapers also ran the strongly worded protests of Western leaders. The chancellor of the country currently subjected to Turkish wrath over its resolution on the Armenian genocide stepped up with an unequivocal statement. Angela Merkel said she was appalled by the attack and that her country stood by Turkey against terrorism. “Nothing can justify such attacks and nothing can excuse such cruelty,” she said.

NATO Secretary-General Jens Stoltenberg announced that the alliance stands “in solidarity with Turkey against the global threat of terrorism.” European Commission spokesperson Maja Kocijancic, British Foreign Secretary Philip Hammond and Paris Mayor Anne Hidalgo, among others, all condemned the Istanbul terror attack in the strongest terms.

It must have been somewhat confusing to readers to see Turkey’s president accuse Western countries of trying to revive their dreams of destroying Turkey alongside the statements of Western leaders strongly condemning the Istanbul terror attack and standing with Turkey.

The PKK did not claim — although it is unquestionably the usual suspect — responsibility for the Istanbul attack, but it did claim the Midyat attack.

The Financial Times reported, “Turkey is now the most dangerous country in Europe," citing Global Peace Index data, and "Violence has cost the country nearly 10% of its gross domestic product, or $129 billion, over the past year, the Institute of Economics and Peace estimates.”

Nonetheless, Turkish officials are adamant that the fight against terrorism — which is synonymous with the PKK — will go on.

For certain pundits, the violence brought by the PKK to Turkey's urban centers is a sign of the weakening of an organization that has lost — according to Erdogan — more than 5,000 people. The General Staff announced that the PKK has lost 1,000 just in Nusaybin and Sirnak, the two Kurdish towns that were largely depopulated following three months of curfew and siege by Turkish security forces. This figure may or may not be included in Erdogan’s calculations, but Turkish officials tend to interpret the wave of terror in the urban centers as the result of the PKK's weakening in its strongholds and desperately resorting to terror in the cities.

This analysis may be valid. The only problem is that the public has heard similar statements since the PKK came into existence and so do not find them very convincing.

On the other hand, there are some analysts who believe that attacks like the one that hit Istanbul on June 7 are an impressive display of the militants' power to strike targets in large cities at will.

No matter what, if terrorism continues to strike Turkey's commercial, political and tourism centers, Erdogan and his followers will believe ever harder that it's the work of “foreign powers.”

Erdogan loyalists will continue to interpret these attacks as part of an international plot against the invincible leader of the Muslims and end his rebellion against an unjust international system. Thus, the terror attacks and violence represent to them not only a very formidable challenge for the rule of Erdogan and his party, but an existential threat to Turkey itself.