A surge in the private security sector raises questions about the surge's cause, and about its potential to deteriorate quality of service and basic rights. 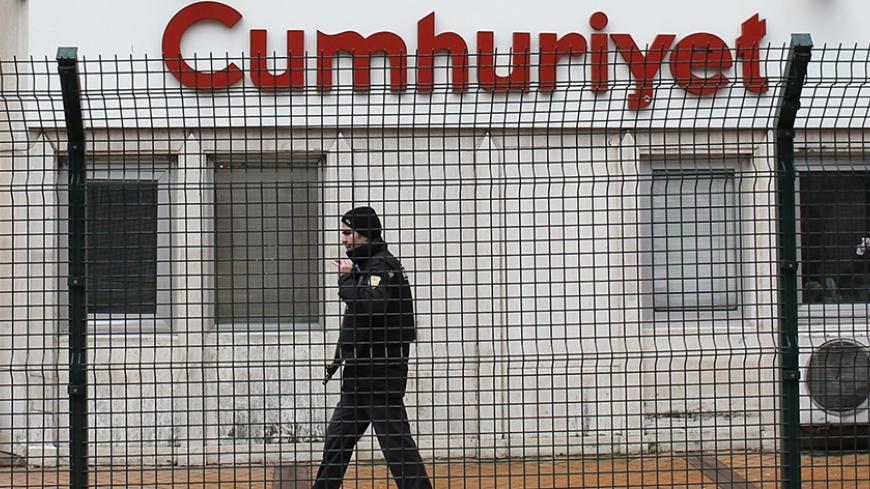 A private security employee stands guard at the entrance of the daily newspaper Cumhuriyet's offices, in Istanbul, Jan. 14, 2015. - REUTERS/Murad Seze

Turkey's parliament is considering changes to a law governing private security services — an idea that frightens some people and reassures others.

Private security has become one of the fastest growing sectors in Turkey. Newspapers are filled with thousands of notices from state institutions, municipalities, universities, private firms, malls and airports that offer security jobs. The state is the leading buyer of private security services, which procured nearly $1 billion worth between 2009 and 2015. Roughly $300 million of that amount was spent in 2015 alone.

There has been an incredible boom in the number of private security services in Turkey, from only 21 in 2004 to some 1,500 in 2015. Today, more than 300,000 armed or unarmed private security personnel are standing guard at malls, patrolling parks, providing crowd control at concerts and sports venues, and running airport security checks. According to Serdar Gokhan Arikan, the head of the board of the Private Security Services Association, the sector is expected to grow by 15% by the end of 2016, reaching 350,000 personnel.

According to a security company proprietor who did not want to be identified, in Istanbul alone there are nearly 500,000 people working to acquire private security competence certificates. In Turkey, anyone over the age of 18 with a primary school diploma can pay $400 for a weeklong training course to get the certificate, which can lead to a job that pays $500 a month and provides insurance. This is precisely why private security has become one of the most sought-after jobs, especially to young people who are unemployed or have low income or education.

On June 19, a proposal for amending the law on private security services was submitted to the parliament without fanfare. The amendment, which will most likely be approved without debate, aims to encourage growth of the sector while expanding the legal powers of private security personnel almost to the levels of official law and order forces. According to the proposal, private security personnel, in addition to being authorized to perform electronic checks of people and their belongings, will also be allowed to check identities and vehicle documents.

The draft also stipulates that nonmilitary private sector facilities that could have bearing on the national security, economy and public order will be considered “strategic locations and facilities.” When local administrators declare locations such as nuclear facilities, airports, sports and other venues for mass events as strategic locations and facilities, then private companies can be employed to provide security. In other words, if a governor feels that the police and gendarmerie cannot provide sufficient security for a facility or an event, he can call on private security services. This will be a form of outsourcing for local administrators, who sometimes say their official law and order resources are stretched thin in their struggle against the Kurdistan Workers Party (PKK) and the Islamic State (IS).

With the PKK and IS stepping up terror acts in major cities, making public security and order a priority, the availability of private sector resources will be indispensable.

Naturally, the private security sector is pleased with the increasing demand. Arikan believes the proposed changes would have two key benefits. First, the sector will become more effective in providing public order and security. According to Arikan, if the proposal is enacted, security personnel will no longer be just passive guards at building entrances, but an active auxiliary force. The plan would thus expand the powers of private sector personnel, while enhancing their prestige.

Arikan said the other benefit would be a new wave of employment in the sector. The current private security corps of 300,000 could reach 500,000 in just a couple of years, he estimates. Arikan also believes that the proposal would contribute significantly to higher quality in the sector.

But there are people who criticize the draft bill from the legal perspective.

“This arrangement could lead to widespread arbitrary practices. We can assume that some of those employed will not be suitable for this service,” Metin Feyzioglu, the president of the Turkish Bar Association, told Al-Monitor.

Ankara Bar Association President Hakan Canduran criticized the proposal for eliminating a condition requiring Turkish citizenship. The plan would require foreigners to have at least eight years of primary education to be hired as an unarmed guard, and a high school education to become an armed guard. There have been many objections to granting foreigners, especially Syrians, the right to work as private security personnel. Some worry that powerful extremist Salafi and jihadi groups in Turkey could infiltrate the private security sector. Employing non-Turks could well emerge as a critical national security issue.

Investigative journalist Cigdem Toker said the current level of government spending for private security indicates uncontrolled growth, given that an allocation for it did not even exist in the national budget six years ago. Toker said some of the "growth" is actually by political design and allows those dollars to be spent elsewhere. She thinks the Justice and Development Party (AKP) government — by labeling private security "a multipurpose and useful instrument" — aims to use some of the funds to protect fancy public buildings; skirt public disapproval over controversial infrastructure projects such as bridges, dams and highways; use the sector as an employment source for low-income and low-education AKP sympathizers; funnel funds to friendly companies; and turn private security services into a potential instrument of violence under state tutelage.

In sum, if the bill passes, the private security sector will play a more active role in public order and security in cities. This means even faster growth of the sector, but with that growth come questions about the quality of the sector and its potential dangers and detrimental effects on basic human rights and freedoms once the sector is equipped with police and gendarmerie powers.