Turkey’s ruling party has paved the way for a controversial education foundation that many see as a parallel system to educate young people in line with the AKP's ideology and Islamist tenets. 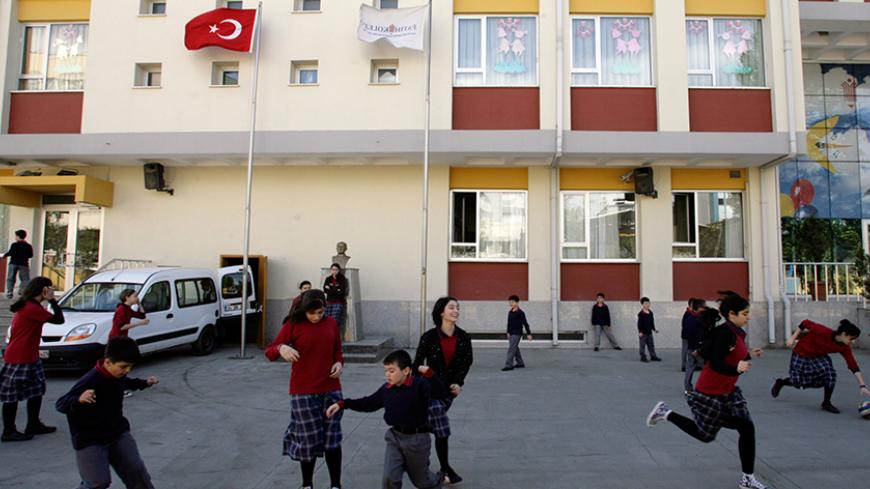 Children play in the garden of Fatih College in Istanbul, April 16, 2008. - REUTERS/Osman Orsal

Back in 2012, President Recep Tayyip Erdogan, then prime minister, made a memorable speech to young supporters of his Justice and Development Party (AKP), calling for young generations to “pursue the causes” of their “religion” and “hatred,” among other things. Since then, he has frequently spoken of raising a “devout generation.”

During 14 years of AKP rule, the Education Ministry has seen the longest list of successive ministers, totaling six so far. In 2012, the government made fundamental changes to the education system, expanding religious classes and introducing Arabic, Quranic studies and the life of the Prophet Muhammed as elective courses in public schools. Ironically, some of the country’s earliest secular schools were established during the reign of Ottoman Sultan Abdulhamid II, a revered figure in AKP ranks, who saw the outdated education system as a key reason why the Ottomans fell behind the West.

Trade unions, academics and opposition parties now argue that Erdogan and the AKP are seeking to build a “parallel education system” of their own to raise the “devout” generations they seek.

Earlier this month, Erdogan and the AKP — seeming unsatisfied with their efforts to transform secular schooling — took a step toward building an education system under their own control and outside the Education Ministry’s institutional framework. Their vision of a controversial educational foundation was presented as a measure to close down schools both at home and abroad run by the movement of Fethullah Gulen, the AKP’s top enemy since 2013, when prosecutors and police executing a massive corruption probe were accused of being Gulenists seeking to topple the AKP.

Despite strong objections and brawls in parliament, on June 17 the AKP-dominated house approved a bill creating the state-controlled Education Foundation (MAVAK), whose name — perhaps tellingly — contains not the Turkish but the Arabic word for “education.” The legislation paves the way for the allocation of large public resources to the foundation while keeping it outside the Education Ministry’s control in what many see as an effort to raise young people in line with AKP ideology and Islamist tenets.

In the days leading up to the bill's approval, students at Turkey’s leading high schools were already up in arms in a nationwide protest against attempts to Islamize education. In almost unanimous messages, they denounced government-appointed principals with religious motivations and called for a “modern and not partisan” education.

MAVAK, authorized to open schools for all levels, from kindergartens to universities, will be based in Istanbul rather than the capital, Ankara, where the Education Ministry is. Under the bill, the foundation will be initially granted 1 million Turkish lira ($350,000) from the ministry’s budget. It will also receive — for free — properties the ministry and other public agencies own abroad, including land and buildings. Similarly, the Finance Ministry will grant it state-owned real estate across Turkey, again free of charge.

The foundation is expected to also receive money, buildings and land from private donors, which will be exempt from income and corporate taxes. It will be able to set up companies and joint ventures, similarly exempt from tax.

One critical provision allows MAVAK to select and train its own teachers, suggesting the AKP is mistrustful of teachers working in the current system. Some 300,000 young people who have graduated with education degrees remain unemployed in Turkey, despite staffing shortages in public schools. Meanwhile, more than 300,000 students in the mainly Kurdish southeast have been deprived of education for months amid devastating clashes between the security forces and Kurdish militants in urban centers. In a recent report on the 2015-2016 educational year, the Education and Science Laborers Trade Union denounced the Islamization and commercialization of education, stressing that religious foundations have extended their activities into public schools. “Under the pretext of alleviating the burden of students, the number of classes in philosophy, sciences and arts are being decreased, while the selective religious courses are being increasingly imposed on students,” the report stated.

Another critical provision pertains to the management of the foundation. A 12-member board of trustees includes seven permanent members entitled to serve until age 72. Four of them will be selected by Erdogan and the other three by the government, meaning the AKP will continue to dominate the foundation even in the case of a government change.

Once MAVAK becomes operational, the government plans to step up efforts to force the closure of an estimated 2,000 Gulen-affiliated schools and universities abroad. Under the bill, no Turkish individuals and entities other than MAVAK are now allowed to run schools, dorms or universities abroad.

The precise number of Gulen-affiliated educational institutions abroad remains unclear. Turkish political scientist Dogu Ergil, who published a book on the topic in 2010, was unable to give an exact number, though he provided a list of schools he managed to identify. In 2014, The Wall Street Journal reported that the Gulen movement runs more than 2,000 educational establishments in 160 countries, and offered a map of their locations across the world.

While the controversy over the AKP’s intentions simmered, some sharp criticism came from an unlikely quarter: a former education minister. Huseyin Celik, an AKP co-founder who has fallen out with the party, wrote a series of articles on his personal blog, slamming the government for turning schools into an experiment.

During his trips abroad, Erdogan has already been pressing his hosts to close down the Gulen community’s schools in their countries. And now the inception of MAVAK may give him a way to rule the education field.