Poll: 65% of Palestinians want Abbas out

A recent opinion poll showed that a majority of Palestinians in the West Bank and Gaza Strip want President Mahmoud Abbas to resign, but the success of any elected replacement will be contingent on international approval. 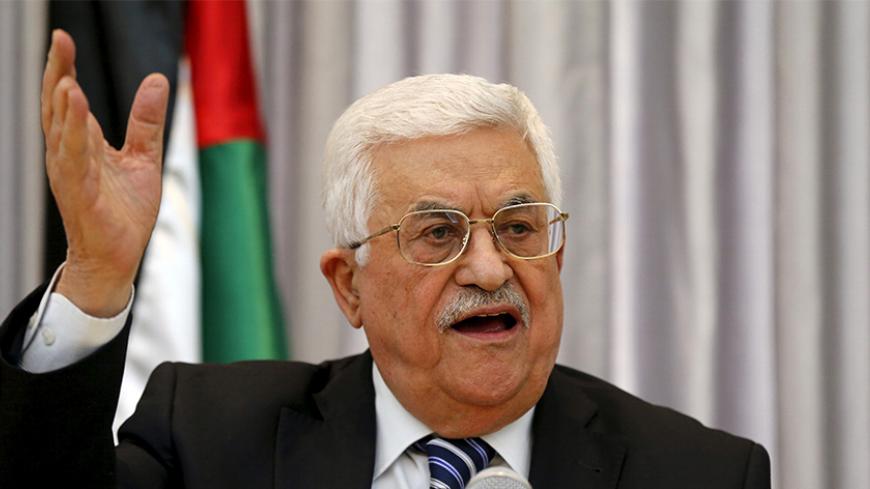 GAZA CITY, Gaza Strip — The findings of a recent opinion poll conducted by the Palestinian Center for Policy and Survey Research were clear and surprising.

If presidential elections were held now, according to the poll, Abbas and two other candidates — Ismail Haniyeh, deputy chairman of Hamas' political bureau, and Fatah leader Marwan Barghouti, who is currently incarcerated in Israel — would receive 20%, 35% and 40% of the vote, respectively.

Walid Ladadweh, an official with the Ramallah-based center’s survey research department, told Al-Monitor that the center applies the latest scientific methodologies when conducting its surveys and the margin of error does not exceed 3%. The center chooses the survey sample in cooperation with the Palestinian Central Bureau of Statistics. In this particular survey, the sample included 1,270 people from the West Bank and Gaza Strip.

Ladadweh said the center divided the Palestinian territories into 127 regions and a team of qualified researchers and coordinators conducted face-to-face interviews with 10 participants in each region. The information was audited and reviewed more than once before being published. He pointed out that the citizens were very responsive to the survey and gave their opinions freely, a detail he said adds to the findings' credibility.

“This is due to the respect for freedoms and the advanced democratic situation in the Palestinian territories, unlike in many Arab countries, where the citizen is forced to hide his real opinion for fear of the authorities,” he said.

He noted that the center is sharing the results with all segments of society in the Palestinian territories, through the media and workshops held by the center to discuss the polls. Government authorities haven't been all that interested in the findings, he added.

Journalist Ahmed Labed from Gaza City told Al-Monitor, “President Abbas, who has been in power for 11 years, has been illegitimately occupying the presidential office. His mandate expired in January 2009. Moreover, throughout the period of his presidency, Abbas hasn't accomplished any noteworthy achievement for the Palestinians.”

A woman from Ramallah told Al-Monitor on condition of anonymity, since she feared possible public harassment for her opinion, “Abbas’ resignation has become a necessity for the Palestinian cause. Lawlessness has spread in the West Bank under his reign, and the Gaza Strip was abandoned after being seized by Hamas in 2007.”

University student Khaled Shatat told Al-Monitor he wants Abbas to stay in office given that the Hamas-Fatah internal division — now entering its 10th year — has prevented presidential and legislative elections from being held in the Palestinian territories.

There has been much talk about Abbas' legitimacy since his presidential term ended in 2009, but no presidential elections have been held. Abbas has stressed more than once that he would not run for another term if elections are held in the Palestinian territories. He also said he believes regional and international efforts are being deployed to search for his successor, according to statements made by Fatah leaders.

Mukhaimar Abu Saada, a professor of political science at Al-Azhar University in Gaza, emphasized that Abbas' term should have expired after four years in accordance with Article 36 of the Basic Law. He said, “Abbas, who is now 82 years old, was elected on Jan. 10, 2005, and his term ended on Jan. 10, 2009, which means he has been president for 7½ years after his term expired.”

He added, “The continued negotiations with Israel, which reached a standstill, are a key factor that led the people to call for Abbas’ resignation, not to mention the suffering experienced by the Palestinian people in the West Bank and Gaza because of the internal divide between Hamas and Fatah. A segment of Palestinians blame Abbas for this continued divide, since he refuses to reconcile with Hamas.”

Still, Abu Saada said he finds the 65% figure surprising. Previous polls indicated that support for Abbas would decline if he decided to run in any upcoming presidential elections, but this new survey's results go far beyond that projection.

“This percentage is alarming since it [comes from] the Palestinian Center for Policy and Survey Research, which has been conducting surveys for 16 years and enjoys credibility among the Palestinians. It remains up to the Palestinian people to decide who their next president is,” he added.

However, Mustafa Sawaf, a political analyst and former editor-in-chief of the Hamas-run Palestine newspaper, said he is not surprised by the high percentage of Palestinians calling for Abbas’ resignation. He told Al-Monitor, “This is natural given Abbas’ policies, which hurt the people and the Palestinian cause, and in light of the failures of his political project.”

Sawaf said the poll was conducted because of efforts by Arab, regional and international parties such as Egypt, the United Arab Emirates, Jordan, Israel and the United States to find a successor to Abbas. These parties, he said, believe Abbas has done all he will do as far as battling Palestinian factions that are fighting Israel and improving security coordination with Israel. These parties believe there must be another person who can assume the presidential office and give more concessions to Israel at the expense of the Palestinian cause.

Regardless of the number of Palestinians calling for Abbas’ resignation, choosing a new president is not just an election matter, but is also subject to regional and international consensus. Elections could bring a president who does not enjoy the approval of these regional and international parties, especially Israel. Indeed, the legislative elections in 2006 brought Hamas to power without the approval of foreign parties.

Meanwhile, those same parties, particularly Israel, Egypt and the UAE, believe Abbas has become too old and is unable to hold the reins of power. They fear Hamas will exploit the situation and find its own successful candidate for the presidency.