Twelve men were killed in Tripoli upon their release from prison, raising questions about relations between the Government of National Accord and militias. 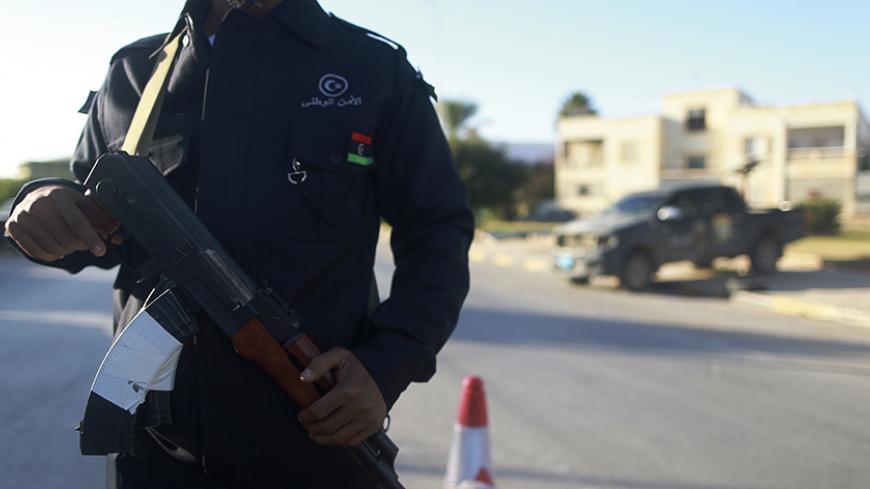 A security officer stands with his weapon on a road leading to a police station in Benghazi, Dec. 4, 2014. - REUTERS/Esam Omran Al-Fetori

On June 10, Libyans awoke to yet another horrific event — news of the shooting deaths of 12 men whose bodies were then disposed of at different locations around Tripoli. What actually happened and who is to blame remains far from clear. Emerging details suggest the same old pattern of armed militias claiming nominal loyalty to the government acting with impunity. The United Nations urged the Government of National Accord (GNA) on June 13 to investigate the murders, and the GNA has promised to do so and hold the perpetrators accountable. The case, however, has raised suspicions about the government's power and its relationship to militias, which it is supposed to be taming.

Innocent people get killed almost every day in Libya, but this time it is different. All 12 men had been granted conditional release by court order, and their families had been notified to come to the Ain Zara prison, just south of Tripoli, to pick them up. Their murders marked the second single-day mass killing in Libya since nearly 50 civilians were killed on Nov. 15, 2013, by Misrata militias in what became known as the Gharghour massacre, referring to the southwestern Tripoli district where the massacre took place.

Al-Monitor has seen all but one of the court orders for the men's release on the condition that they report to the prosecutor general’s office in Tripoli twice a month pending verdicts against them. This is a common practice in Libya. A local prosecutor explained to Al-Monitor, on condition of anonymity for security reasons, that in such cases, “Most likely the court will return a not guilty verdict, and such individuals will be set free since they were given conditional release.”

Siddiq al-Sur, from the prosecutor general’s office, was quoted as telling a local TV station on June 11 that what had happened was nothing more than a pure crime, punishable by law. He asserted, “[All the] perpetrators will be held accountable.”

The murdered men had been jailed for allegedly taking part in suppressing anti-regime demonstrators during the February 17 Revolution in 2011. Yet the four years they spent in jail without being convicted can only be interpreted, as one legal expert told Al-Monitor on condition of anonymity, as a “weak case in which evidence is lacking and witnesses lack credibility.”

One day before the inmates' release, some hardline, pro-revolution activists had gone on Facebook to implicitly call for them to be killed. Neither Sur nor any other official who talked about the massacre offered a plausible scenario of what happened to the victims. Even Prime Minister Fayez al-Sarraj appeared to lack any facts on the case. He only mentioned the tragedy at the end of a 15-minute speech on June 13 on security developments, saying that his interior minister, Arif Khoja, is taking steps to ascertain what had happened and to bring the murderers to justice.

Ain Zara prison director Ali Saadi, a former rebel and notably not a police officer as required by law for jail directors, claimed that all the victims had left the prison grounds and that some of them had been met by their families and relatives outside the facility's gates. One victim’s sister, however, disputes this claim, telling a local TV channel that her brother was never handed over to his father, who had been waiting at the jail for him. Her claim would appear to be supported by the procedures in place for inmate releases.

Al-Monitor spoke to Mohamed, who would not reveal his full name but has been with the judicial police for the last two decades and works at Ain Zara. Mohamed described the procedure for releasing an inmate as follows: “The inmate’s family or lawyer must be notified, and any one of them must come to the jail, where he or she will be taken into a special room inside the jail to wait for the inmate to be released. Once the release takes place, the relative or lawyer has to sign a register that he was present when the release occurred.” No evidence of the victims' relatives having signed such a register has been produced, and no one has come forward with claims to have seen one.

Indeed, a February 2016 YouTube video featuring Ain Zara documents the procedure for releasing inmates. In the video, the inmates are indeed met by their families or lawyers inside the jail, not outside it. The video appears to have been produced by the prison authority for propaganda purposes given the reputation of Ain Zara. Human Rights Watch criticized conditions at the jail in a December 2016 report.

One must remember that the killings took place in a jail that is supposedly under the control of the GNA, which is recognized by major world powers as Libya’s legitimate government. Since its members' arrival in Tripoli on March 30 from their base in neighboring Tunisia, many have accused the GNA of being at the mercy of armed militias in the capital, which means it is not free to do what is expected of it as the national government.

In regard to the killings, Ali Qatrani, a boycotting member of the GNA, accused the GNA of working with militias that it are supposed to have disarmed and been banned altogether. Indeed, the murders raise the issue of the relationship between the GNA and armed militias and who is really in control of the Libyan capital.