Israel says it will streamline checkpoint procedures to facilitate Palestinians' movements, but some see the promise as merely a public relations move and a reminder of the occupation. 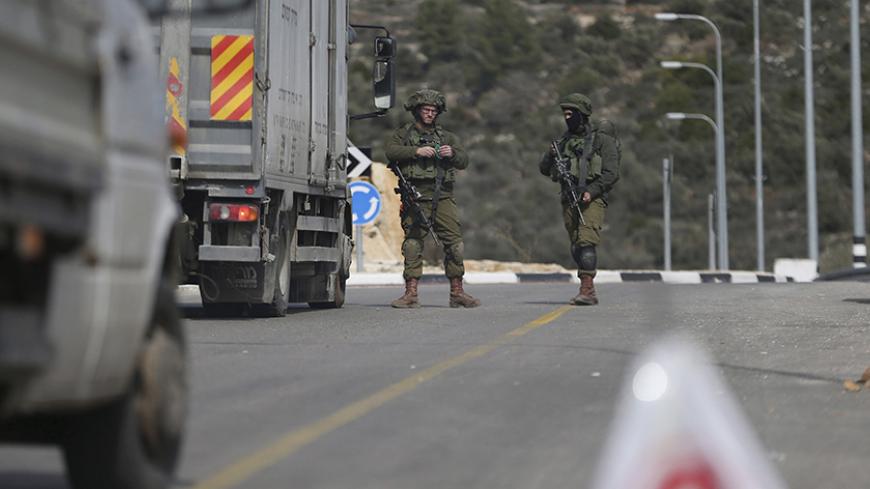 Israeli soldiers stand guard as they carry out an identity check on Palestinians at an Israeli checkpoint leading to the West Bank city of Ramallah, Feb. 1, 2016. - REUTERS/Mohamad Torokman

RAMALLAH, West Bank — The Israeli army will make improvements at military checkpoints in the West Bank and Jerusalem, Israeli Coordinator of Government Activities in the Territories (COGAT) Yoav Mordechai announced May 26. But not everyone sees that as good news.

On his Facebook page, titled “The Coordinator,” Mordechai posted in Arabic, “It has been decided to renew and improve checkpoints in the West Bank, [to] increase the number of Palestinian workers allowed to pass through to their workplaces in Israel, improve waiting conditions and adopt advanced technology at all checkpoints.” He said this plan — which Israel estimates will cost 300 million shekels ($78 million) to implement — will increase the amount of goods that pass through Israeli checkpoints by 30% and reduce wait times some 30% to 50%.

However, the Palestinian Ministry of Civil Affairs, which handles civil coordination with Israeli, said it was not aware of the proposed improvements. "We did not receive any information in this regard," Imad Qaraqreh, the director of public relations and information for the ministry, told Al-Monitor.

On April 1, Robert Piper, United Nations coordinator for humanitarian aid and development activities, called on Israel to respect Palestinians’ freedom of movement, saying Israel's restrictions in the occupied territories affect all aspects of daily life and continue to separate Palestinians and divide their land. These restrictions are sometimes physical, such as walls, checkpoints and roadblocks; others are bureaucratic, such as denying permits and closing off areas under various pretexts, according to Piper.

Meanwhile, the UN Office for the Coordination of Humanitarian Affairs reported in its latest study, published in January, that during the last three months of 2015, Israeli security forces had deployed 91 new closure obstacles and measures including military checkpoints, shutting down roads and setting up barracks — a 20% increase.

Regarding the reasons for the proposed improvements, Antoine Shalhat, an expert on Israeli affairs and director of the Israeli Scene unit at the Madar center (Palestinian Forum for Israeli Studies), told Al-Monitor that these improvements are tied to the decline of the popular uprising that has been ongoing in the Palestinian territories since October.

“Israel adopts the carrot-and-stick policy in the occupied territories; [Israel] seeks to contain the uprising by announcing [improvements], but also it [adopts a policy] against Palestinians of killing those who conducted stabbing and run-over operations,” Shalhat added.

On Oct. 4, Israeli Transportation Minister Yisrael Katz had threatened to stop issuing permits for 100,000 Palestinian workers and dismiss them from their workplaces in Israel. Katz also threatened to prevent Palestinians from traveling on the same roads used by Jews in the West Bank, and to erect more checkpoints.

Shalhat noted that “Israel needs Palestinian workers to carry out certain jobs, such as construction work, which they [Palestinians] master. This is not to mention that Israelis refuse to do such work, while foreign workers are not as skillful as Palestinians. Thus the issue of Palestinian employment in Israel is not only a political issue, but an economic one as well. This issue [of not granting permits] has raised concerns among contracting companies that the construction sector would be affected should Palestinians be denied of work permits.”

The new Israeli defense minister, Avigdor Liberman, announced May 23 that the government would implement some improvements for Palestinian workers on the eve of Ramadan, which began June 5. He also ratified the recommendations of Gadi Eizenkot, chief of general staff of the Israel Defense Forces, to ease restrictions during Ramadan on Palestinians visiting Jerusalem and the lands along the borders of 1948.

But what Israel calls improvements are viewed by Palestinians as an entrenchment of the occupation.

Fatah official spokesman Osama al-Qawasmi told Al-Monitor, “The real improvements Israel could provide for us [would be] for [Prime Minister Benjamin] Netanyahu’s government to recognize Palestinian rights and remove every last soldier, camp and settlement from the West Bank.”

Qawasmi said, “If Israel thought that by providing some economic improvements and expanding checkpoints it could cover up its crimes, it would be dead wrong. We want freedom and independence, not fixing up some conditions here and there to improve the occupation’s image.”

He added, “The carrot-and-stick policy does not work for us. If Israel wants to play nice, it should fully recognize the Palestinian rights on the basis of international legitimacy and international law, and by establishing a [Palestinian] state based on the 1967 borders.”

Israel's goal behind the announcement of the improvements, Qawasmi noted, is designed to send a message to the international community that it has serious and good intentions toward Palestinians, despite the settlements, the confiscation of land, arrests and incursions it is actually committing.

Author and political analyst Ahmed Rafiq Awad also told Al-Monitor that Israel’s proposals are merely an attempt to present itself as helping Palestinians economically and allowing them to move freely.

“The Israeli improvements are tools of occupation. Israel makes the Palestinians’ lives complicated, then provides a few improvements to ease the conditions,” Awad added.