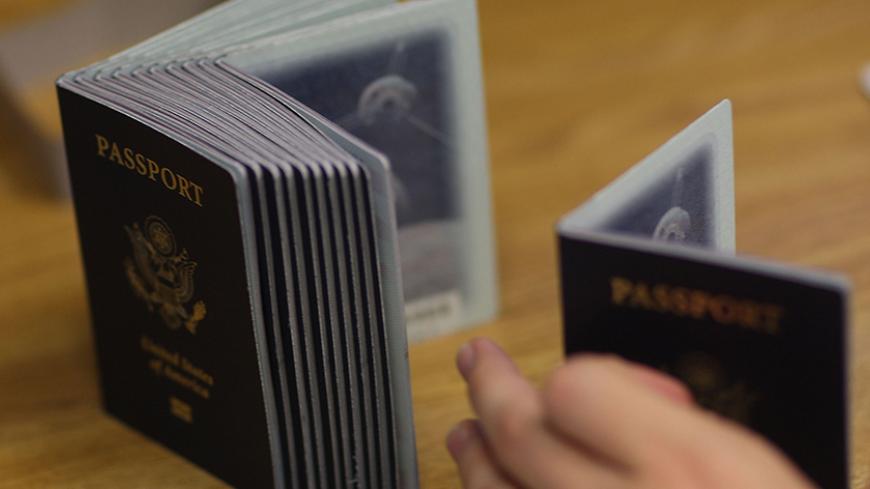 A passport processing employee handles a stack of passports at the Miami Passport Agency in Florida, June 22, 2007. - Joe Raedle/Getty Images

Three American congressmen, all staunchly opposed to the Iran nuclear deal, have been denied their bid to visit Tehran to inspect the country’s nuclear sites, a job that is typically reserved for individuals with expertise in the area.

Republican Reps. Frank LoBiondo of New Jersey, Mike Pompeo of Kansas and Lee Zeldin of New York had requested the visas at Iran’s interest section of the Pakistani Embassy in Washington in February. The United States cut off diplomatic ties with Iran after the 1979 Islamic Revolution when Iranian students stormed the US Embassy and took more than 50 Americans hostage for 444 days.

Iran’s Foreign Ministry responded to the request June 7 with an open letter. The letter called the congressmen's request a “publicity stunt" and said, “Bearn [sic] in mind that as members of the US Congress you are not a global authority.”

Regarding the congressmen's request to visit the Parchin military site and the Fordow and Arak nuclear sites, the Foreign Ministry letter said the International Atomic Energy Organization is “the sole body competent for monitoring the implementation” of the nuclear deal.

The congressmen had also requested a meeting with Iranian President Hassan Rouhani, Foreign Minister Mohammad Javad Zarif and Mohsen Fakhrizadeh-Mahabadi, who was incorrectly referred to as the head of Iran’s nuclear program in the congressmen’s letter. Fakhrizadeh-Mahabadi is a member of Iran’s Islamic Revolutionary Guard Corps (IRGC) and a physics professor at Imam Hussein University who has been referred to as “the father of Iran’s nuclear-weaponization program” by the Western press. The head of Iran’s Atomic Energy Organization is Ali Akbar Salehi.

The Foreign Ministry also took the congressmen to task for their support of legislation that bars people ordinarily exempt from US visa waiver laws from entering the United States without a visa if they have visited Iran. “Surely it is ironic that you believe that going to Iran would ‘radicalize’ and turn citizens of all other countries into ‘potential security risks’ for the United States; but you still seek to visit Iran and believe that such a visit will have no such radicalizing effect on you,” the letter said.

The Foreign Ministry letter said that “tens of thousands of tourists, academics, investors, students and businesspeople from around the world — including many Americans" — have visited Iran "without any delay or complication” but have done so “in the appropriate respectful manner.” The letter added, “We doubt that any self-respecting country would grant a visa under such circumstances.”

The congressmen had also asked for a briefing from the IRGC about the 10 American sailors who had crossed into Iranian waters in January and had been apprehended and then released. The legislators also had several other requests: a briefing on Iran’s past and future missile tests; to speak with American citizen Siamak Namazi, who has been held in Iran since October; and to discuss the case of former FBI agent Robert Levinson, who reportedly went missing in Iran in 2007.

The last time an American official sent a public letter to Iran was in March, when Sen. Tom Cotton, R-Ark., warned Iranian officials that any nuclear deal with President Barack Obama could be modified by a future American president. The letter, which was signed by 46 other Senate Republicans, was tweeted to Zarif both in English and Persian. Zarif tweeted back to Cotton with his own letter, saying that Cotton had difficulty understanding his own constitution as it pertains to presidential powers.