A lighthouse in Gaza was recently inaugurated, inspiring hope for Gazans to open up to the world. 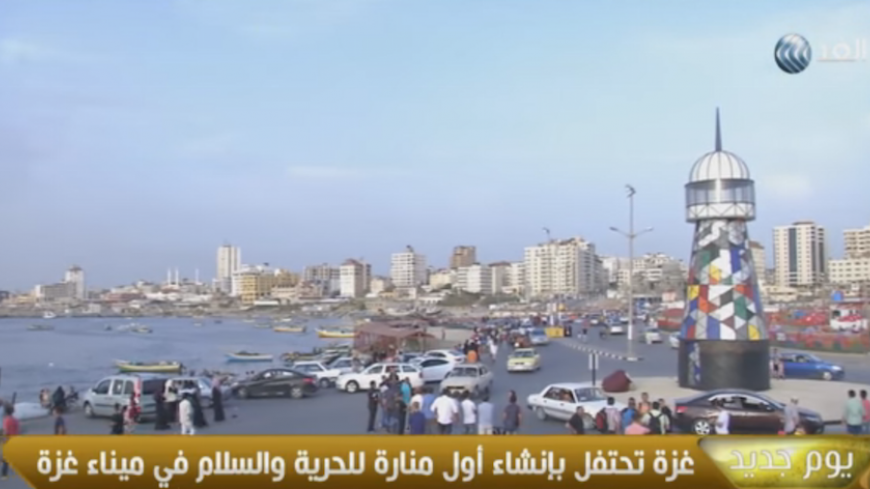 Al-Ghad TV features a segment on the new lighthouse in Gaza, June 8, 2016. - YOUTUBE/QanatAlGhad

GAZA CITY, Gaza Strip — In the past when fishermen entered the waters off Gaza at night, they relied on lights attached to their small vessels to guide them. Lighthouses never led their way. Such structures had never been part of their culture or navigational practices. Now, however, a lighthouse stands at the center of Gaza's port.

If compared to well-known lighthouses in the Arab world, it resembles neither Beirut’s 197-foot-tall modern lighthouse nor the 394-foot-tall historic lighthouse of Alexandria. In fact, Gaza's lighthouse is a 45-foot-tall artwork whose light shines some 2 miles into the Mediterranean Sea.

Resting on a 13-foot-wide concrete base, the lighthouse features a tower decorated with multicolored tiles and topped with a clear plastic dome. It’s also made up of previously used and recycled materials, much of it collected from the destruction left by the 2014 Israeli war against Gaza, including building stones, material from cooking utensils and assorted debris.

The lighthouse was inaugurated June 4 by the artist who designed it, Sharif Sarhan. Its construction was overseen by the Ministries of Culture, Transport and Communications in Gaza with the financial support of the A.M. Qattan Foundation and the Danish Center for Culture and Development.

Ismail Abu Shamis, an independent lecturer in politics and Gaza’s alternative history, told Al-Monitor that Gaza has never had a lighthouse. “The Gaza Strip throughout history was not a good place to set up a shipping hub, which is why it was inconvenient to establish a large port with a lighthouse. The Gaza port could barely serve as a quay for fishermen, and it made up for this through important maritime relations with neighboring ports, such as the Alexandria port.”

Sarhan, apparently pleased with the reception the lighthouse received, spoke to Al-Monitor about his project. “The cornerstone of the building is a stone from the Al-Nada towers, which were bombed by Israeli forces during the recent war in the northern Gaza Strip,” he said.

The base of the lighthouse is adorned with Arabic characters engraved in clay painted black. The upper part of the structure is covered by zinc and tin plates as well as iron cooking pots, which are remnants of houses bombed in the Shajaiya neighborhood, east of Gaza City, said Sarhan.

“The upper part consists of a round glass facade topped with a dome of white plastic with lights that shine into the sea,” Sarhan explained. “The lighthouse was supplied with electricity and the land on which [it was built] was provided by the Ministry of Transport and the Gaza municipality.”

“The iron tower [at its center], which used to be [part of] a railway, is an archaeological remain, but we do not know exactly to what year it dates. We have found two numbers engraved on it. These numbers possibly refer to the number of train stations established during the time of the railway at the end of the 19th century,” Sarhan said. Workers on the tower said the iron structure washed up on the Gaza shore five years ago.

Samir Metr, undersecretary at the Culture Ministry, told Al-Monitor that his ministry was keen on the project, stressing that the lighthouse symbolizes that Gaza seeks humanitarian communication with the entire world.

“The lighthouse is a message that after every war Gaza has endured, there is new life. The lighthouse symbolizes the Gazans’ will to break the blockade,” Metr said. He added that its construction lasted nine months, and in addition to Sarhan, involved input from architects and intellectuals and of course builders.

Tagrid Atallah, a writer, attended the lighthouse inauguration. “This work of art proves that we can still be creative after all the suffering in the wars we have been through and that wars cannot break our imagination or limit our creativity,” she said. “Art is a form of resistance.”

At the inauguration, booklets were distributed containing the plans and objectives of the project and photos of workers during the various stages of development and construction.

“The project aims at changing and improving a part of Gaza City with contemporary works of art and measuring its impact on the community,” the booklet states. “It includes the use of scrap and material that has been left behind by the occupation soldiers, which have been reassembled in an artistic form with the help of artists, engineers, architects and young specialists who have done a major service to render the lighthouse an important monument in the most important area of Gaza.”

The booklet further states, “The most important objectives of the project were to move art from walls and into the streets and embellish the city of Gaza with contemporary works of art, which will have a positive impact on the community.” Indeed, the project seems to have had a big impact on residents, who have gathered by the hundreds near the lighthouse.

Afaf al-Hasasneh, visiting the lighthouse with her 4-year-old niece, told Al-Monitor, “It is a beautiful project that brings life back to Gaza in a simple and spontaneous way. Beautiful initiatives like this help Gaza look better.”

These days, Gaza fishermen can see a light besides those of Israeli cruisers on their tail to ensure they don't cross the maritime border.