In light of the Gaza Strip's electricity crisis, some Gazans believe mosques are largely contributing to the problem with unnecessary electricity consumption. 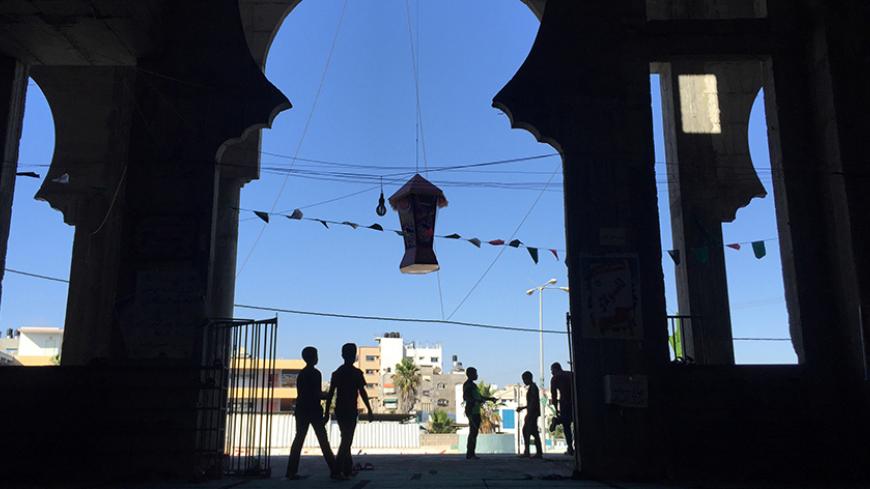 Palestinians leave a mosque after attending prayers during the Muslim holy month of Ramadan, in Gaza City, June 17, 2016. - REUTERS/Suhaib Salem

GAZA CITY, Gaza Strip — Since 2006 when Israel destroyed the only power plant operating in Gaza in retaliation for the kidnapping of its soldier Gilad Shalit by the Palestinian resistance factions, the Gaza Strip has been suffering from a severe electricity crisis, which is only growing worse with every passing year. This is due to several reasons, mainly the limited energy resources and the population boom, with about 1.9 million people now living in Gaza.

Since the beginning of Ramadan on June 6, the Gaza Electricity Distribution Company has been reducing supply hours while temperatures are rising.

On May 16, the Ministry of Energy in Gaza had announced that the mosques in the Gaza Strip consume electricity worth 200,000 shekels ($51,500) a month during the winter season when air conditioning and cooling systems are not used. This means that in the summer months, the electricity usage in mosques increases.

Mahmoud Baroud, a mosque-goer living in the Nuseirat refugee camp, said that unnecessary electricity consumption in light of the crisis plaguing the Gaza Strip is a very big problem.

“I believe ventilators and air conditioners should not be turned on outside the time of prayers inside mosques, even if such electronics do not take up much power, in light of the current crisis. Everything should be taken into consideration in order to ration electricity consumption,” he told Al-Monitor.

Abdullah Mahmoud Sharshara, from Gaza City, believes that the scarcity of water and electricity as well as the poor state budget are all reasons to ration the consumption of services in order to provide better and more services for citizens.

“Rationing consumption is a moral obligation that the mosques should also undertake, as mosque-goers often take the advice of preachers, especially during the month of Ramadan. However, mosques have been consuming irrationally with all the air conditioners and ventilators they have,” Sharshara told Al-Monitor.

Sharshara called for setting a limit for electricity consumption in mosques, stressing the need to have them monitored and supervised by the Ministry of Awqaf to prevent waste of electricity.

“The amount payable by mosques for the electricity bill does not exceed 200,000 shekels, which is not a problem as this amount is barely equivalent to a one-hour operation of the power station,” he said.

Lubbad added, “The problem lies in the lack of electricity sources arriving from Egypt, Israel and the local power plant to the Gaza Strip, which necessitates a minimum of 450 megawatts daily, while what we have available at best, if the power plant worked at full capacity in addition to the electricity lines from Egypt and Israel, is 240 megawatts.”

The main sources of electricity in Gaza include a number of Israeli lines that provide electricity to areas on the Israeli-Gaza border, as well as an Egyptian power line that feeds Rafah south of Gaza. This is in addition to the electricity provided by the local power plant.

Lubbad said that according to his estimate, Gaza’s mosques consume 5-10 megawatts per month, as they use electricity during prayer times only.

He further said that the Gaza Electricity Distribution Company had made a qualitative step in a bid to ration the mosques’ electricity consumption. “We determined the number of mosques that get electricity from the Gaza power plant. We will set prepaid meters inside mosques to bind them to pay in advance for their consumption, maybe also through donations of citizens or the Ministry of Awqaf,” he said.

According to statistics that Al-Monitor secured from the Ministry of Awqaf in Gaza, the number of mosques in the Gaza Strip covering an area of 360 square kilometers (139 square miles) is more than 1,000 — there are three mosques to every square kilometer.

Ramzi al-Nawajiha, director of the information office at the Ministry of Awqaf, told Al-Monitor, “Mosques [currently operating] in Gaza number about 1,000, 950 of which are under the direct supervision of the ministry and the other 50 are affiliated with other religious institutions. Nine other mosques were destroyed in the 2014 war and are currently being reconstructed by Turkey, Malaysia and Kuwait. This is in addition to 64 mosques also destroyed in the 2014 war, which have yet to be rebuilt.”

Nawajiha stressed that there are instructions within his ministry to ration electricity consumption inside mosques, and workshops have been held to this effect. “During these workshops, we emphasized the need to raise awareness about electricity consumption and to revive religious restraint among people in mosques. We also followed up on those working in mosques and set forth a comprehensive study of the case of every mosque within a monthly report to point out the biggest problems impeding the mosques’ operations and work on solving them,” he said.

If we compare the number of electricity hours in the homes of the 2 million people in the Gaza Strip and in the mosques, we find that the latter are consuming a lot while some houses go 12 hours without electrical power.