Many Nubians are finding fault with a Ramadan TV series they say misrepresents their forced displacement more than half a century ago. 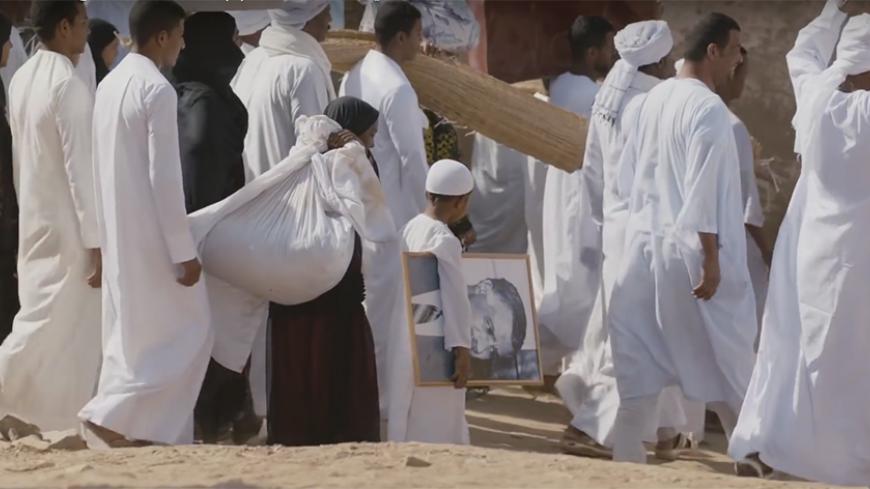 A Nubian child is seen carrying a picture of Egyptian President Gamal Abdel Nasser in episode five of Mohamed Mounir's "The Singer." The Ramadan series has been criticized by Nubians for misrepresenting their 1963 displacement from their homes for the construction of the Aswan High Dam. - YouTube.com/Alhayah Series TV

After episode five of Mohamed Mounir’s "The Singer" series aired recently, Nubians were angered by what they deemed to be misrepresentations of their displacement from their homes in 1963 to accommodate construction of the Aswan High Dam under President Gamal Abdel Nasser.

The Nubian page on Facebook categorically rejected the scenes, which it said inaccurately represented Nubians’ displacement and showed them as happy to leave their homes. In one scene, a child holds Abdel Nasser’s picture while in the background plays a song Nubians usually listen to on happy occasions.

The page launched a campaign against the series as it expressed its disappointment and said it had expected the series to highlight many Nubian issues, but this has not happened.

Suleiman asserts in a Facebook post that the series includes several lies, most notably by depicting luxury boats transporting the people of Nubia. Suleiman stressed that the boats that carried the people at that time were designed to transport cattle and the immigration process was not generous.

He pointed out that Nubians at that time would have spoken Nubian, while in the series, Nubians speak Arabic, the Upper Egypt dialect.

To express their anger on social networking websites, a number of Nubians started a hashtag that translates to “The Singer does not represent Nubians.”

Mohamed Azmi, head of the General Nubian Union in Aswan, said Mounir’s decision to address fateful Nubian issues with such “absurdity” was intentional, not accidental. Azmi wondered why, if Mounir really believed Nubians were happy about their displacement, he years ago sang “Abayasa,” a Nubian song about their suffering and their wishes to return to their lands.

He did not rule out the possibility that the state influenced the series. He said during a telephone interview with Al-Monitor that there is a tendency in the state to usurp Nubians’ rights and show them as happy about displacement, with the aim of denying them the right to return to their areas of origin in accordance with Article 236 of the Egyptian Constitution in 2014.

He pointed to the need to revive the Nubian language and put an end to its marginalization, adding that Nubian is the original language of the Egyptian state and its revival would enrich the culture of the community.

Azmi said he still feels that Nubians would love to return to the banks of the Nile, and added that this is an inherent right that the Nubians must be granted in accordance with the constitution.

Azmi stressed that Nubians will not abandon their tenets and that they are ready to confront any attempts to falsify history.

Al-Monitor contacted Hadiyah Gamal, a 68-year-old Nubian woman who was displaced and who currently lives in Kom Ombo. The woman told Al-Monitor that she is watching "The Singer" series. Asked about her interpretation of the displacement scene, she said, “There are definitely Nubians who were happy [initially] about displacement.”

She said that Nasser promised the Nubians a decent life, but that they were shocked upon their arrival in Kom Ombo that his promises were not fulfilled.

Ridha Mustafa, a Nubian activist and Gamal’s eldest son, said in a telephone interview with Al-Monitor that those in charge of the series should have shown the suffering of the Nubians following the immigration, instead of settling for a scene of joy during displacement.

Mounir briefly commented on the Nubian anger in a June 19 interview conducted with the Egyptian Al-Watan newspaper, saying critics are making a mountain out of a molehill.

Mohammad Mohammadi, one of the authors of the series, told Al-Monitor by phone that the writers didn’t intend to show the Nubians as delighted with immigration nor were they seeking to embellish the image of the regime at the time.

He strongly denied that the state exercised any influence over him or co-author Ahmed Mohyi.

He agreed that the luxury boats used in the immigration scene were not realistic for the period, but said the lack of time prompted those in charge to resort to graphics to complete the scene. The series was written and performed in Arabic, he said, because many Egyptians don’t understand the Nubian language.

Mohammadi said, “We hope that the suffering of the Nubians will be represented [in later episodes] in a more realistic way, and we were keen on this in the scenario. However, the performance of some actors was not impressive.”

He further told Al-Monitor he respects the angry reaction sparked by the series, but he added that people should not pass judgment before watching the end. Filming is still in progress, and the Nubian public might be pleased with the remaining episodes.

He stressed that Mounir is aware of the sacrifices made by the Nubians, and no one can deny the suffering they went through.

Mustafa Abdul Qadir, a Nubian researcher and member of the Supreme Council for Culture, said that to be accurate, those in charge of the series should have used archived pictures of the displacement operation.

In a phone interview with Al-Monitor, he called on Egyptian authorities to invoke Article 236 of the constitution, which stipulates the return of Nubians to their places of origin. The authorities have put off taking action on the subject while the Nubian people have suffered marginalization under successive governments.