In an interview with Al-Monitor, member of the PFLP Central Committee Zulfikar Suergo says that the Palestinian leadership has failed to put an end to the people's dire situation. 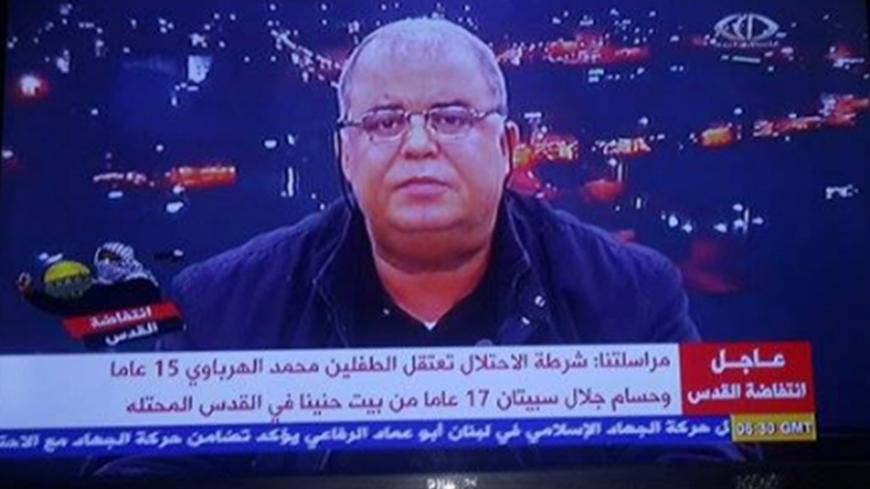 GAZA CITY, Gaza Strip — Zulfikar Suergo, a member of the Central Committee of the Popular Front for the Liberation of Palestine (PFLP), announced his withdrawal from public political life May 7 on Facebook. He did not state the reasons behind his decision.

Suergo, born in Gaza City in 1963, joined the Palestinian left wing as a high school student there. In 2006, he ran in parliamentary elections to represent Gaza City, but failed to secure a seat. Suergo has been a member of the Central Committee since 2008 and is also a member of the national committee to follow up on the electricity dossier in the Gaza Strip.

Al-Monitor met with Suergo on May 19 in Gaza City to discuss his retirement and his views on a number of Palestinian issues.

Al-Monitor:  What were the reasons that pushed you to withdraw from Palestinian political life?

Suergo:  At the outset, I would like to note an important point. I retired from public political life, but I did not resign from the PFLP Central Committee, where I will not have any public activity. I will remain a soldier serving my people in the face of the injustice that has befallen them for years. In recent times, the burden has become heavier on the Palestinian people and leadership, as they continue to be completely denied their rights at the Arab, regional and international levels. Palestinians have been left alone to fight against the Israeli occupation and the blockade imposed on Gaza and the resulting unemployment and hunger. After 30 years of struggle and political activism, the political leadership of the Palestinians, including myself, have [reaped nothing] but utter failure. We have reached a phase where the Palestinian-Israeli conflict is meant to come to an end. I will not be part of this phase, and I will wait for the right opportunity to return to political action. That will be when we are strong enough to restore rights to the Palestinian cause.

Al-Monitor:  How do you view the internal Palestinian situation in light of the Fatah-Hamas split and the division between Gaza and the West Bank?

Suergo:  Sadly, we have failed to put an end to the division after almost 10 years. I was among the people who worked hard on this issue for long years. I believe that the division is likely to persist into the coming few years, as it has become some sort of prevalent culture to belittle the Palestinian national project through what is being organized at the Arab, regional and international levels, in cooperation with Israel, to end the Israeli-Palestinian conflict and turn the Palestinian dream into a mini-state in Gaza, divide Jerusalem, annex Jerusalem to Israel and apply the so-called economic peace, proposed by [Israeli Prime Minister] Benjamin Netanyahu.

Al-Monitor:  Twenty-two years have passed since the signing of the Paris Protocol, which governs the economic relations between the Palestinian Authority [PA] and Israel, specifically the tax collection mechanism and financial issues. How do you view the protocol, and what were its repercussions on the Palestinian economic situation, especially in the Gaza Strip?

Suergo:  The Paris Protocol is a historic mistake made by the official Palestinian leadership, as it has made the Palestinian people hostage to donor funding and to the Israeli tax and economic policies, whereby the Palestinians are dealt with as a subordinate rather than an independent party, and we are paying the price. Because of this agreement, we destroyed all hopes to build a strong Palestinian economy that is independent of Israel and thus of establishing an independent Palestinian state.

Al-Monitor:  Your withdrawal from political life came after the tragic deaths of three children who burned to death after their home was set ablaze by candles, which the family was using due to the ongoing electricity crisis. As a member of the national committee to follow up on the electricity dossier, where do you think things went wrong, and what is causing the power crisis plaguing the Gaza Strip?

Suergo:  The blame for the fire in the Shati camp, in western Gaza City, that took place on May 7, lies squarely on the Palestinian leadership — be it the PA leadership and party leaders in Gaza, including Fatah, Hamas, Islamic Jihad, etc. They are to blame for the crisis plaguing the people. All the problems taking place in the Palestinian arena are the result of our idiocy, which gives Israel ample opportunity to exploit our division to keep imposing the blockade. We have tried for years to convince the Palestinian leadership to work hard to resolve the electricity issue. Our incompetence, however, has been a pretext for others to point the finger of blame and failure at us. This is what prompted me to leave political life.

Al-Monitor:  How do you view the events [individual attacks on Israelis] that have been taking place in the Palestinian territories since October 2015? Do you consider them popular outbursts of protests or a full-blown intifada? What are the reasons behind their decline in the past two months?

Suergo:  What is happening in the Palestinian territories is a popular outburst of protests to express rejection of Palestinian policies in dealing with Israel. It is a normal reaction by a generation that has been marginalized and has had its dreams shattered.

This generation has gone [over the heads of] their official leadership and risen up in the streets to say to the world that it will not accept defeat or retreat. Unfortunately, the Palestinian leadership has failed to pay attention to [the young Palestinians’] creativity, and has also failed to benefit from their drive and momentum to form a unified Palestinian leadership with clear organizing slogans around the rebellion to ensure its sustainability until the achievement of its goals. The Palestinian leaders have used the popular outburst to improve its negotiating position with Israel and to serve political disagreements. This will inevitably lead to its demise. As I mentioned before, we are on the verge of new changes and rearrangements in the region that definitely require the uprising to be put down through economic inducements and palliative measures to deal with the suffering of the Palestinians.

Al-Monitor:  Since the beginning of May, the Gaza Strip has been witnessing Israeli military incursions and exchanges of fire between the Israeli army and armed Palestinians following the former's persistent attempts to destroy tunnels. Is Israel getting ready to wage a new aggression on Gaza?

Suergo:  I do not think that there is a new war on Gaza, but rather further economic restrictions and tighter blockade, which is a prelude to the so-called economic peace to annex Area C of the West Bank to Israel and turn the rest of it into four small cantons. Gaza will also be separated as part of the Giora Eiland plan, which would give the Palestinians a part of the territory of Egypt’s Sinai desert near Gaza to establish a Palestinian state. Palestinians will not accept this, and much blood will be shed to stop this scheme.