How Ankara and the PKK misread civilians’ reactions to ongoing violence 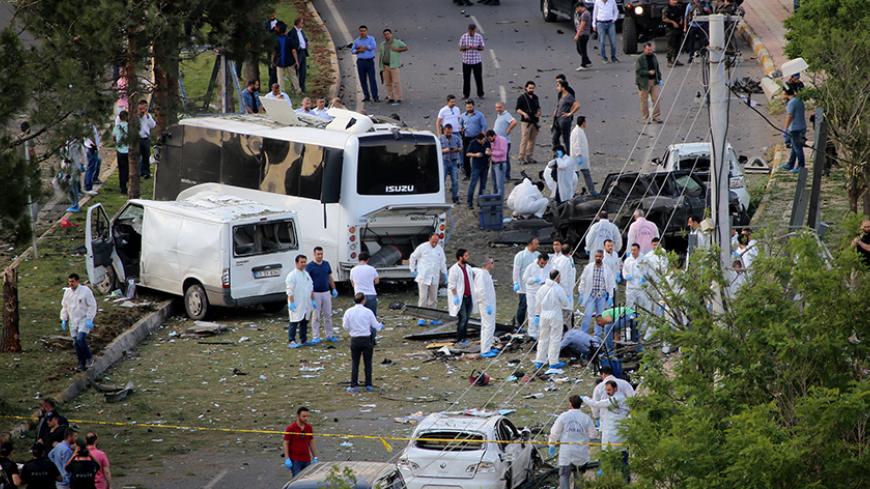 Armed violence is the most used instrument of power for organizations such as the Kurdistan Workers Party (PKK) to impose their political agendas. But in recent months there have been signs that the PKK is having trouble managing this violence. The latest example came May 10 in the Durumlu village of Turkey's Diyarbakir’s Sur district, when a massive explosion killed 16 civilians.

According to villagers' statements, Orhan Yakar noticed a suspicious truck that night near his house. Yakar, who has been wary of recent animal thefts, asked the driver his identity and why he was in Durumlu. Yakar was not satisfied with the driver’s responses and began arguing with him, but the driver pulled out his pistol and warned Yakar to go away. Yakar went to his house to get his own weapon and called on his relatives to help him. As the truck was driving away, villagers pursued it in several vehicles.

Village head Bayram Yaman said the villagers did not know who was in the truck or its cargo. Just as they stopped the truck, there was a massive explosion. The blast left a crater 30 meters (almost 100 feet) wide and 4 meters (13 feet) deep. Three bodies were recovered, but 13 villagers were initially listed as missing and later identified as dead. Dozens of residents were wounded. The size of the crater suggested the explosive was nitrate based and enhanced with 10-12 tons of C3, a plastic explosive.

The PKK’s military wing, the People’s Defense Forces, issued a written statement claiming that the truck, which had been loaded with explosives by PKK militants, was stopped by some local people while driving away and exploded because of bullets that hit in the ensuing clash.

Although the PKK tried to avoid being blamed by pointing out villagers’ involvement, the incident generated strong reaction from regional Kurds and from the entire country.

The blast was felt across the entire city of Diyarbakir. Authorities spent four grueling days recovering what was left of the bodies and performing exhaustive DNA analyses. Security sources in the region who spoke to Al-Monitor said the blast had left 39 Kurdish children orphans and eight women widows.

The real target of the bomb was the governor’s office in the center of Diyarbakir, the sources said, noting there could have been hundreds of people killed if the truck had exploded in downtown Diyarbakir during the day.

“No matter how the truck exploded, no person or organization can avoid being blamed for driving through a village with so many explosives and endangering people's right to life. With this incident, we once again remind the PKK of its responsibility to cease bombing attacks that have made our cities unsafe, have caused escalation of tensions and underline once again that such actions cannot be justified by citing social demands.”

What's behind the PKK’s sharp increase in destructiveness in the clashes that have been raging since July? Why the surge of civilian losses in such actions?

The first cause is the shift of clashes to cities. The PKK, in transforming itself from a rural- to an urban-based armed organization, seems unable to discern the effects of its decision on civilians, mostly fellow Kurds.

Another reason is that the PKK is taking advantage of the experience and military training it has gained fighting in northern Syria and of abundantly available explosives and new weapons. It can now launch spectacular attacks with heavily bomb-laden vehicles. These newfound explosive and logistics capabilities make for more destructive attacks inside Turkey.

Here, I want to report an observation I made during my trips to the clash zones. About 60-65% of the Kurds living in those areas want these clashes — which they don’t really understand — to end immediately. Both the PKK and Ankara misinterpret the resentment of this mass of people who are most affected by such clashes and the resulting socio-economic disasters.

In reality, the anger of hundreds of thousands of Kurds is not against Ankara or the PKK, but the incessant clashes that severely disrupt their lives. Ankara and the PKK cannot understand that most of these people are furious with them both, with Ankara’s slogan of "Obey us" and the PKK’s “Rise and take up arms.” True victory will only come by winning the hearts and minds of the people of the region. The question now is, which side will be the first to succeed?