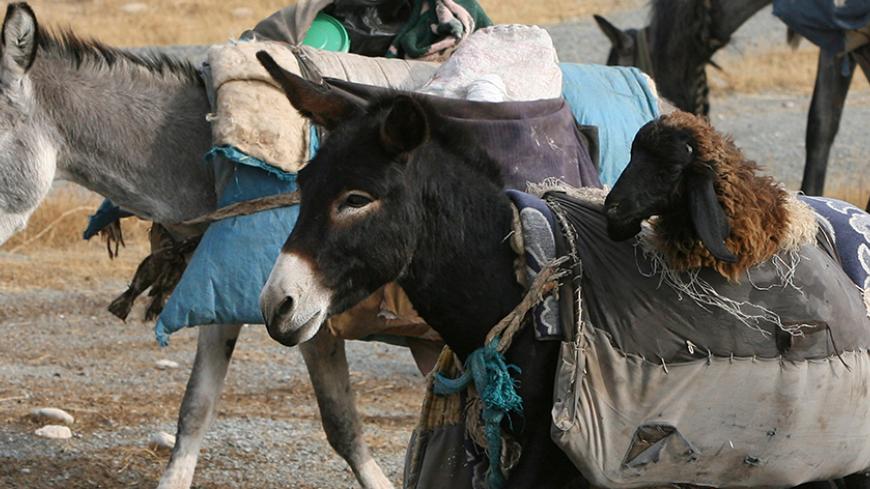 Sheep and donkeys are led by nomads to their village near the town of Cizre, southeast Turkey, Oct. 16, 2007. - REUTERS/Fatih Saribas

Turkey was once a self-sufficient country in terms of food and generated major revenue from the export of food items. In recent years, however, it has become an importer in the realm of agriculture as a result of decreased state support for farmers and stockbreeders and the privatization of state-owned meat and dairy enterprises under the Justice and Development Party (AKP).

The shrinking output of meat, in particular, has sent prices skyrocketing, meaning that meat is now a luxury product beyond the reach of many low-income households. The importation of meat and livestock has failed to remedy the situation, and the crisis is growing even bigger amid the worsening conflict in Turkey’s Kurdish-majority eastern and southeastern regions, the traditional leaders of the husbandry and stockbreeding sectors.

In the husbandry sector, the eastern and southeastern provinces account for 46.3% of Turkey’s sheep, 36.8% of goats and 28.4% of cattle, according to Semsi Bayraktar, chairman of the Turkish Agricultural Chambers Union. However, the region has seen thousands of people migrate due to the worsening security situation, marked by heightened violence and terrorist attacks by Kurdish militants and heavy-handed military operations against them. Some 100,000 farmers and stockbreeders left their villages, fields and pastures in the two months after unrest flared up in the southeast in July 2015, moving to urban areas or other safer places. Taking livestock to pasture became virtually impossible as many rural regions were declared “security zones” off-limits to civilians and lengthy round-the-clock curfews were imposed on residential areas. Thousands of farmers were forced to sell their livestock and quit husbandry, bringing stockbreeding in the region almost to a halt and further widening the shortage in meat production.

As a result, meat prices have soared. Over the past year, they increased by more than 25%, forcing the Food, Agriculture and Husbandry Ministry to impose a price ceiling.

Yet neither the price ceiling nor the meat imports produced the desired results, leading the government to return to the importation of livestock. Shortly before his decision to step down as prime minister and AKP chairman last week, Ahmet Davutoglu signed a Cabinet decree that gave the green light for the importation of 570,000 animals by the end of the year.

Under the decree, state-owned enterprises are allowed to import tax-free 400,000 cattle for meat production, 150,000 cattle for breeding and 20,000 sheep and goats. One interesting detail allows the importation of animals alien to Turkish lands, an activity subject to the Cabinet's approval. Turkey's Directorate-General of Agricultural Enterprises and the Meat and Milk Enterprise are now planning to buy cattle from the Indonesian islands of Sumatra and Java as well as buffalo from African countries.

In previous years, tons of buffalo meat had made its way to Turkey clandestinely as the domestic supply shrunk. Turkey had also imported thousands of Angus cattle from Uruguay, but their meat, which some retailers pass off to customers as local, disappointed Turkish tastes.

With the Muslim Feast of Sacrifice looming in September, the importation of livestock is likely to rekindle an old debate about whether the sacrificial slaughter of alien animals is religiously permissible. Some have argued against it, claiming the imported cattle and sheep have been bred alongside pigs, while others have been dismayed that people could question “whether sheep and cattle are Muslim or not.”

Agriculture Minister Faruk Celik insists the importation of livestock and meat will go on in an effort to pull down prices. In which regions the imported buffalo will end up remains unknown. How those destined for breeding will be reared domestically is also unclear. Yet the biggest question is how the alien animals will fare with Turkish consumers, who, having turned up their noses at Uruguayan beef, are now forced to try meat from other faraway lands by the Kurdish conflict at home.