"Why don’t we just call it the 'Islamic League' instead of the Arab League?" Turkish President Recep Tayyip Erdogan said in a remark that is bound to raise eyebrows in Arab capitals. 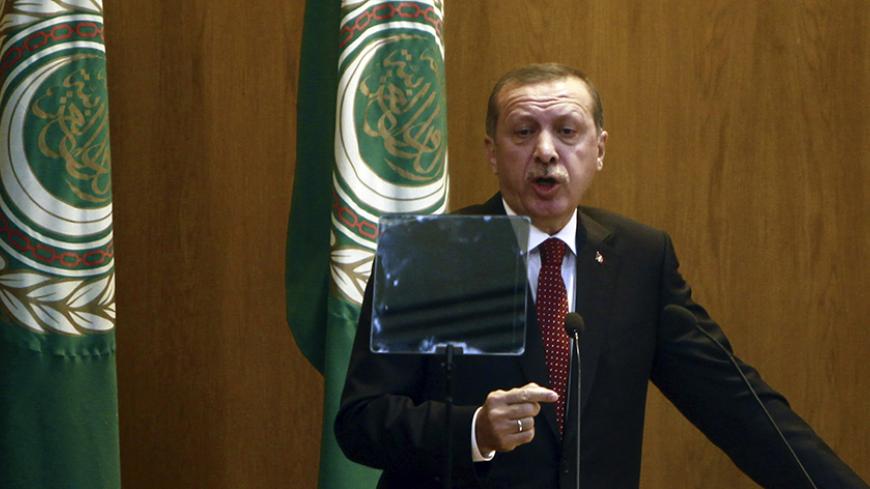 The remarks of Turkish President Recep Tayyip Erdogan at the recent summit of the Organization of Islamic Cooperation in Istanbul, where he urged unity among Islamic nations against what he considers to be a perfidious West, and the threat of terrorism from radical Islamic groups, left many with the impression that he was vying for the leadership of the Islamic world.

There are few indications to suggest, however, that the Islamic world wants Turkey to play such a role. The Islamic world also appears to be as far as ever from the unity that Erdogan has been calling for. Much to Erdogan's disappointment, relations between Islamic countries have proved to be more complex than he imagined.

Turkey's relations with Arab countries have also been problematic due to its historic baggage that harks back the time of Ottoman rule in the Middle East. Remarks out of Turkey about Arabs and the Arab world have usually been evaluated against this backdrop by Arab politicians, academics and analysts. Not surprisingly, accusations of "neo-imperial designs" have been leveled against Turkey as a result.

During his address to the Turkish-Arab Congress on Higher Education in Istanbul last week, Erdogan, in a rare outburst of this kind, blasted at the Arab League, accusing it in effect of being an exclusive and divisive organization preventing Islamic unity.

Lamenting the growing Sunni-Shiite divide, Erdogan said, "No one has the right to harm Islam in this way," adding that Turkey would never contribute to sectarian divisions. His remarks come at a time when Ankara continues to be accused by non-Sunni regimes and groups in the region of fanning sectarian divisions by backing Sunni groups in Syria and Iraq.

"We always talk about Turks and Arabs. I am saddened by this. They talk about the Arab League. So does this mean we should put a Turkish League in front of this?" Erdogan said. "You talk about Islamic cooperation on the one hand and about an Arab League on the other. What kind of business is this? Why don't we just call it the 'Islamic League' instead of the Arab League?"

"The Arab is not superior to the non-Arab, and the non-Arab is not superior to the Arab," Erdogan went on to declare in what appeared to be a criticism of the Arab sense of exclusivity. "I look and see that my Arab brother looks on me differently. If the Turk looks on the Arab differently too then we are in trouble," Erdogan said, exhorting the Islamic world to return to its origins.

While criticizing the Arab League in this manner, Erdogan appears to be forgetting that the Arab League, while comprising Islamic countries only, is essentially a political organization whose members share a common language and culture.

He also appears to have forgotten that Turkey is a founding member of the Cooperation Council of Turkic-Speaking States, also known as the Turkic Council, which was established in 2009. The aim of that council — like that of the Arab League — is to enhance cooperation on all levels between its member states Azerbaijan, Kazakhstan, Kyrgyzstan and Turkey, all of which are predominantly Muslim countries.

Turkey's political relations with the Arab League, on the other hand, were enhanced when the Turkish-Arab Cooperation Forum was established in November 2007 in Istanbul. What we appear to have here, therefore, is another example of Erdogan speaking right off the bat without considering the background to as well as the potential pitfalls in his remarks.

Murat Yetkin, the editor-in-chief of Hurriyet Daily News and a well-known commentator on domestic and international affairs, noted that Erdogan's remarks about the Arab League "were almost as strong as the criticism he levels against terrorist organizations."

Yetkin wrote in his column, "Erdogan may be envisioning a political ideal where the world's 1.5 billion Muslims can act in unity under proper leadership, but he is suffering the disappointment of understanding better — with each passing day — the impossibility of this expectation."

Yetkin also noted that the bulk of the problems faced by the Islamic world today originate from Arab countries, suggesting that what lies underneath Erdogan's frustration is the Arab world's inability to overcome its shortcomings and act in the name of Islam.

Although Erdogan may be yearning for Islamic unity where Turkey plays a key leadership role, Yetkin also underlined the fact that many Arabs hanker after the modern lifestyles that they see in Turkish soap operas, which are highly popular in the Arab world, and which Erdogan has indicated he does not approve of.

A source close to the Foreign Ministry in Ankara, who is critical of the government's Middle East policy and therefore spoke on condition of anonymity, believes that Erdogan has consistently underestimated factors such as Arab nationalism in his approach to the Arab world.

"His view is simplistic and Islamist. He believes that since we are all Muslims there should be no problem in establishing a unified Islamic world that has overcome national considerations, and which acts to secure the collective Islamic interests," the source told Al-Monitor.

Pointing to the recent outrage in Egypt over Cairo's transfer of the Red Sea islands of Tiran and Sanafir to Saudi Arabia, the source said, "National pride and rivalries along this line remain a potent force in many Arab countries. They are no different than Turkey in this respect."

There are also those who suggest that Erdogan's annoyance with the Arab League may stem from the fact that it has always criticized Turkey's military incursions into Iraq, as happened a few months ago when Ankara deployed added forces to its military presence in Bashiqa near Mosul.

The fact that the Arab League's Secretariat is in Cairo may also be another reason that contributes to Erdogan’s annoyance, given his declared distaste for Egyptian President Abdel Fattah al-Sisi and the traditional regional rivalry between Turkey and Egypt.

Whatever the case may be, Erdogan is not known to come out so strongly against a key organization of the Arab world, and the fact that he chose to do so this time could be an indication of just how angry he is that his dream of leading the Islamic world is so unrealistic, especially when it comes to the Arab world.