Is homophobia at all-time high in Tunisia?

Homophobia has reached an unprecedented level in Tunisia, as National Guard members are posting violent threats against the gay community on social media and signs banning gays from entering are displayed in public places. 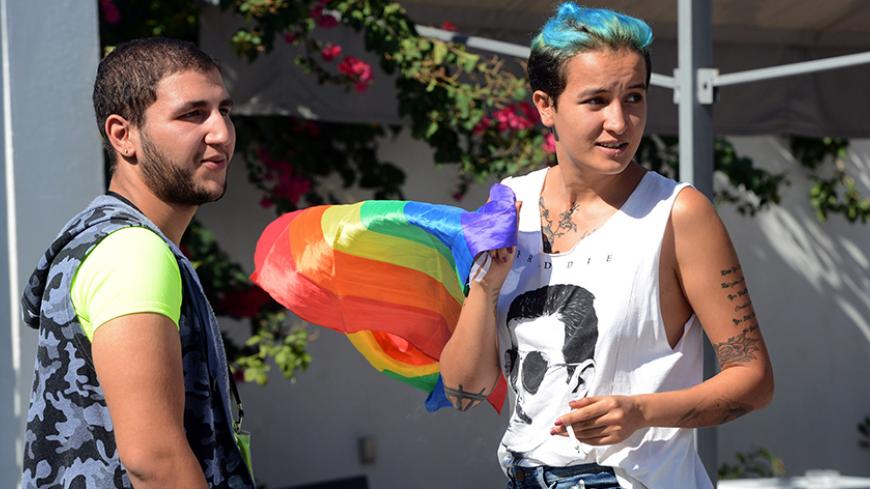 Tunisian activist and the vice president of the Tunisian Shams association for the decriminalization of homosexuality speak together before a conference in Tunis, Oct. 3, 2015. - FETHI BELAID/AFP/Getty Images

TUNIS, Tunisia — The wave of homophobia began April 14 when a Tunisian actor went on live television and blatantly made homophobic remarks. Ahmed Landolsi appeared on the popular talk show "El Hiwar Ettounsi" ("The Tunisian Conversation") and was asked about his views on homosexuality. He expressed his belief that “homosexuality is a sickness” and that “Tunisia’s constitution states that the country’s religion is Islam,” so homosexuality is “against the constitution.”

Landolsi’s motivation for these comments remains unclear. He is a key public supporter of the Esperance Football Club in Tunis and his supporters would likely not respond favorably to comments friendly to the lesbian, gay, bisexual and transgender (LGBT) community. He may have been pandering to these soccer fans or even expressing his true beliefs. Either way, he doubled down on his comments, expressing the same thoughts on Mosaique FM.

The LGBT activist community condemned his comments and implored him to rescind his homophobic remarks, but Landolsi refused. Landolsi’s comments and refusal to apologize were not surprising; he expressed a belief shared by many Tunisians. According to a survey by ELKA Consulting, 64.5% of Tunisians believe homosexuals deserve punishment.

In response to this general acceptance of such normative homophobic comments, Ahmed Ben Amor, vice president of Shams, Tunisia’s first LGBT activist organization, appeared live on "El Hiwar Ettounsi" to publicly condemn Landolsi’s comments and share his organization’s principles. The talk show is not known for being a particularly thoughtful program, and the episode featuring Ben Amor reinforced this idea.

To create controversy, the TV show not only invited Walid Ettounsi, a blatantly homophobic singer, but also Imam Mohamed Ben Hamouda. They strategically placed Ben Hamouda and Ben Amor across from each other and constantly showed viewers the face of the imam while Ben Amor was speaking.

The show lasted for more than 43 minutes and Ben Amor expressed his organization’s guiding goal: the repeal of Article 230 of Tunisia’s penal code, which criminalizes sodomy. He also spoke about the general tolerance of homosexuality in Arab-Muslim society, citing Abu Nawwas, an Arabic writer famous for his stories involving homosexuality.

The imam countered by saying that homosexuality is not just forbidden in Islam, but also in Christianity and Judaism. Ettounsi also expressed homophobic sentiments and got the audience to laugh at Ben Amor’s ideas.

This episode of "El Hiwar Ettounsi" kicked off the controversy in Tunisia, which continues to this day. Never before had an entire episode of a Tunisian talk show been dedicated solely to the topic of LGBT rights. Shams leaders, including Ben Amor, had previously gone on talk shows such as "El Hiwar Ettounsi" and "Mamnoua min el-Bath" ("Forbidden to be Broadcast"), but only as part of short segments.

In the days following the airing of the show, pictures spread across social media, depicting signs above doors of restaurants, internet cafes and grocery stores that homosexuals were forbidden to enter. The window of a taxi in Kairouan displayed a sign that read "No rides for homosexual passengers.”

LGBT activists have never before expressed such profound worry about the potential for hate crime attacks. In fact, their worries are quite rational.

Baatour told Al-Monitor of three hate crimes in the past week. He said, “A group of homophobic men attacked Shams member Bouhdid Behadi at the downtown Passage metro station. Safwen Charfi, another man, also reported being verbally harassed with homophobic slurs in the Bardo neighborhood. And another young man was beaten on his back in another homophobic attack in the Cite Ettadhamen neighborhood.”

Ramy Ayari, a prominent LGBT activist who caused controversy on social media in September 2015 for posting a photo of himself kissing another man, also was beaten and kicked in the face in a homophobic attack by off-duty police officers outside the Wax nightclub in Gammarth, a suburb of Tunis, on April 29. Speaking to Al-Monitor, Ayari said, “I can’t even move. They attacked me and my friends because we were with transgender people.”

In response to the rise in homophobia throughout Tunisia, LGBT activists have organized a march in downtown Tunis on May 15. A group of counter-demonstrators have also posted a Facebook event on the same day, titled “Beat the gays.” Neither security forces nor the Ministry of Justice have addressed the potential for violence and intimidation.

Riadh Mouakher, member of parliament from Afek Tounes, told Al-Monitor, “Most parties aren’t saying anything about the issue of homosexuality. They are afraid of a negative reaction.” Afek Tounes is the one mainstream party that has been clear in its position demanding a full repeal of Article 230.

Tunisia’s LGBT community may have scored one moral victory over the past week. After Ettounsi expressed his homophobic comments on TV, Shams reached out to concert organizers in Canada and the United States who had already scheduled Ettounsi for shows on May 20-21. The organization informed them of Ettounsi's comments and according to Shams, the organizers responded by announcing a cancellation of the shows and a ban of Ettounsi from all future shows. However, the final outcome remains unclear, as Naoufel Ourtani, a Tunisian journalist, has questioned these claims.

In addition, although most mainstream politicians either oppose repealing Article 230 or are afraid to speak about it, Afek Tounes, the party with the fifth-most seats in parliament, supports repealing the law banning sodomy.

Mouakher said, “Shams' demand is really simple. They aren’t demanding the right to gay marriage. All they want is privacy.” He added, “The constitution is very clear about this. There is a minimum amount of human dignity that you have to respect.”