The LGBT community in Tunisia is seeking to abolish Article 230 — which bans sodomy and under which homosexuals are arrested — despite little support from the government and society. 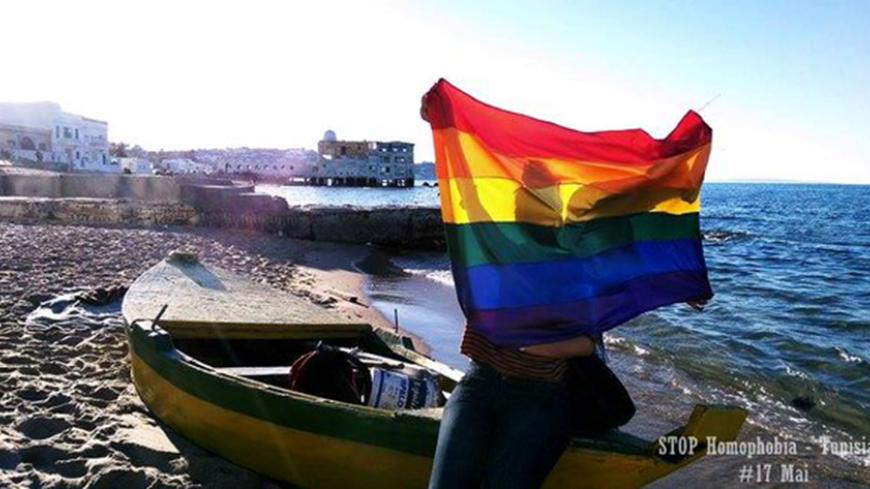 A photo published by Shams, a Tunisian LGBT organization, shows two activists holding a rainbow flag on the beach, May 13, 2015. - Twitter.com/Shams_LGBTQ_TN

The Shams group, Tunisia’s first LGBT organization, planned to protest outside Tunisia’s parliament building in the Bardo neighborhood of Tunis, the nation’s capital. Members of the group and LGBT (lesbian, gay, bisexual and transgender) allies planned the demonstration for Dec. 10, International Human Rights Day. Dec. 10 was also the day that Marwen (pseudonym), a 22-year old gay Tunisian man from Sousse, imprisoned in September for committing homosexual acts in private, was up for appeal in his case against the justice system. His appeal was postponed until Dec. 17, as the judge announced he would decide the case by then.

Two days before the planned demonstration, Tunisia’s Bardo police precinct told the Shams group it would not be allowed to protest because "this perversion cannot be allowed" and indicated that Shams should "go to another country" to do it, Ahmed Ben Amor, a Shams vice president, told Al-Monitor. Then, in a fateful twist of events, with Shams’ protest request already denied by the police and Marwen’s appeal postponed, on Dec. 10, International Human Rights Day, six young men were arrested in their university dormitory in Kairouan and sentenced to three years each in prison on charges of sodomy. Shams called for protest against these new arrests, but with the state of emergency, the route forward remains unclear. Although the mere existence of an LGBT group in Tunisia and Marwen’s potential release are solid signs of progress, gay rights activists face a long, uphill battle in claiming equal rights in their country.

In September, police in Sousse used Article 230, the infamous Personal Status Code law banning sodomy, to imprison Marwen. Marwen’s case became a rallying cause for LGBT activists in Tunisia and abroad. The Shams organization launched a social media campaign with the hashtag #FreeMarwen to help work toward the abolition of Article 230 and to secure Marwen’s release from prison. For the campaign, Shams worked with other Tunisian human rights groups, such as Damj, another group focusing on LGBT issues. At the beginning of the campaign, which was launched in October, the two groups worked together productively.

All of that changed with the planned protest. Shams members felt the protest was a necessary response to comments made by Ennahda member of parliament Abdellatif Mekki on Nov. 29, when he said the group has no right to exist and runs counter to Tunisian values. His comments sparked widespread outrage in the Tunisian LGBT community, and Shams responded by planning the protest outside of parliament. It planned the protest even though the state of emergency caused by the Nov. 24 terrorist suicide attack, which targeted a presidential guard bus in downtown Tunis, killing 14 guards, required it to register with the local police bureau to get permission to protest.

Damj member Abderrazek Selmi told Al-Monitor that his group tried speaking with Shams members to ask them to reconsider, but they chose to go ahead with the protest. “There will not be any further cooperation with them because they didn't ask for advice when it was needed,” he said.

On the other hand, Ben Amor said that Marwen’s case represents “hundreds of preceding cases in which men were unjustly imprisoned using Article 230.” Ben Amor sees no problem in using Marwen’s case as a rallying cry since “his name is actually a pseudonym. We weren’t flashing his real identity around for everyone to see.” Either way, the planned protest was prevented.

With the state of emergency as the reason for banning the protest, the local police bureau told Ben Amor and his fellow Shams activists that they are “perverts” and “will never be able to protest about this cause,” Ben Amor told Al-Monitor. The Nov. 24 bombing in downtown Tunis compelled the General Tunisian Labor Union (UGTT) to cancel its planned strike of private sector workers. The decision by the UGTT to cancel the protest was voluntary and was a direct result of the terrorist attack and declaration of the state of emergency.

In contrast, for the case of the Shams protest, the police used the state of emergency as a facade to prevent members and supporters of an LGBT group from exercising their right to protest peacefully. All of these issues come as Tunisian citizens have become increasingly worried about the violation of basic rights in the wake of the declaration of the state of emergency.

Amid these obstacles and fragmentation in the LGBT activist community, mainstream political parties in Tunisia offer little support for the movement. Souhail Alouini, a Nidaa Tunis MP representing the Kairouan governorate, believes “Tunisian society is not ready for the gay rights cause.” He told Al-Monitor that he does “not see the removal of Article 230 for the time being,” since Tunisia’s president and Nidaa Tunis’ founder Beji Caid Essebsi expressed on Oct. 5 his support for the status quo in terms of the article.

Alouini mentioned the fact that women’s groups are still struggling to gain more rights in Tunisia, even though laws enshrined in the constitution guarantee equality. He saw this as a top priority. Similarly, a female Nidaa Tunis politician who preferred to speak anonymously to Al-Monitor also mentioned this same point, indicating the trend of people considering gay rights as secondary to women’s rights.

Official Ennahda spokesmen were unavailable for comment, but a man working close to Ennahda, speaking on the condition of anonymity, told Al-Monitor that he could not comment publicly since the issue is “too controversial” and “is one of the few subjects that whatever answer I provide there is no upside.” He believes Ennahda may be afraid to comment on the issue because it could easily alienate voters and could also scare away constituents, just as the state-sponsored feminism of former presidents Habib Bourguiba and Zine Alabdine Ben Ali was used as political ammo against Ennahda.

An active member of Jabha al-Shabiyah, the Popular Front, offered a much different take on the LGBT movement in her country. Samar Sdiri, a member of both Jabha al-Shabiyah and the General Tunisian Student Union, told Al-Monitor that her political party supports Shams in its efforts to gain equal treatment for gays in Tunisian society and law. She hopes to see “equality in the Tunisian constitution, regardless of sexual orientation.” She sees Article 230 as “inhumane” and says that Jabha al-Shabiyah would like to see its eventual removal, but understands why it will be difficult, since many politicians lack the necessary “courage” to support such a cause.

In the upcoming months, the Damj group will be working on a presentation of its case against Article 230 in the next Constitutional Court meeting. It hopes the court will determine the article to be unconstitutional. Backed by Marwen’s potential release and the comments made by former Minister of Justice Mohamed Salah Ben Aissa about decriminalizing homosexuality, the LGBT movement seems to be gaining positive momentum.

Adding to this progress, the Shams organization plans to stage its next protest as soon as the indefinite state of emergency ends. If it is not allowed to do so, it plans to launch a campaign to boycott the Tunisian tourism industry by discouraging foreigners to come until Article 230 is abolished. Shams also plans to work harder on publishing the first issue of its magazine, SHAMSMag. Both Shams and Damj are determined to achieve equal rights and fair treatment for a minority community, which has been constantly discriminated against. The next few months will be pivotal for this fight toward justice for the LGBT community in Tunisia.