The Saudi Interior Ministry is doing everything it can to keep this year's hajj season tragedy-free — including, conveniently, shutting out Iranian pilgrims over visa problems. 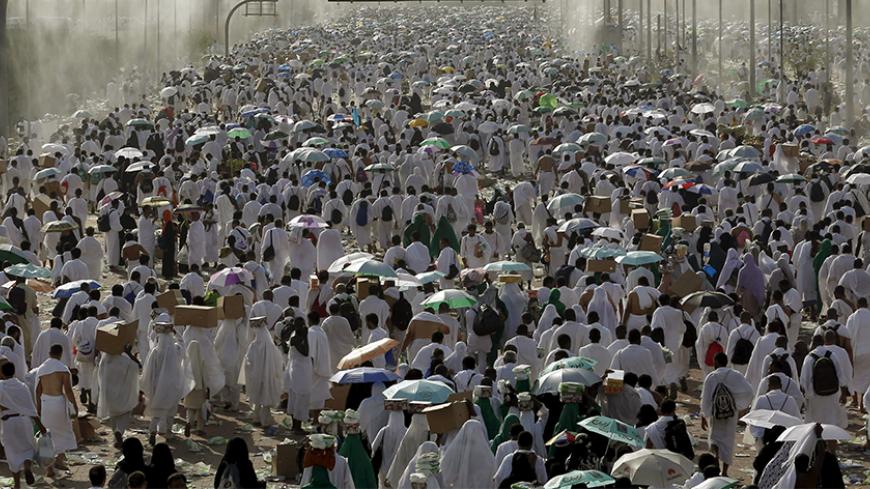 Muslim pilgrims pray on Mount Mercy during the annual hajj pilgrimage outside the holy city of Mecca, Sept. 23, 2015. - REUTERS/Ahmad Masood

Saudi Crown Prince Mohammed bin Nayef is preparing to assure this year's hajj season of pilgrimage to Mecca is safe and not marred by a repeat of last year's bloody stampede. As Iran is a major source of Saudi concerns about hajj security, Riyadh is shutting out Iranians in a move that also suits its efforts to delegitimize Tehran.

The crown prince is also the Saudi interior minister and responsible for security during the hajj. Last September's stampede, in which over 2,200 people died, severely embarrassed the kingdom in general and the prince in particular. The Saudis insist the number of fatalities was much lower. The Wahhabi clerical establishment specifically exonerated the crown prince of any responsibility, arguing the stampede was an accident beyond human control. Some rumors about what really happened point fingers at royal family members seeking special favors, but nothing has been proven.

Nayef announced this month that the Interior Ministry has established the most sophisticated operations control room in the Middle East to monitor developments in Mecca. Some 18,000 closed-circuit TV cameras will be monitored around the clock by 1,600 security personnel. The technology will be state of the art, as the crown prince is known for using sophisticated technology to enhance security.

The security center will allow the ministry to avert crises and respond rapidly if they develop. There will be highly trained personnel who speak many languages — most will speak English — to help manage crowd control. Special attention will be paid to handicapped pilgrims. While the prince made no public reference to last year's tragedy, it is clear the new National Center for Joint Security Operations is designed in part to prevent a recurrence.

The Saudis still remember the Iranian protests and demonstrations in 1987 during the Iran-Iraq War that led to another bloody pilgrimage season. Keeping Iran out of Mecca reduces the risk of protests over last year's tragedy. The Saudis blame Iranians pilgrims for last year's disaster.

The Saudis broke relations with Iran on Jan. 3 after Iranian protesters attacked the Saudi Embassy in Tehran, protests that came in response to the Saudi execution of prominent Shiite cleric Nimr al-Nimr. The break in ties now has the useful benefit of disrupting Iranian access to Mecca.

Saudi Arabia is escalating its campaign to delegitimize Iran and limit its influence in the Islamic world. Denying Iran access to the hajj is a handy way to do so. But the kingdom does not want to appear to be using the hajj to punish Iranian believers for political reasons. Riyadh wants Iran to be blamed for not following proper procedures to get hajj visas. With formal diplomatic relations severed, visa issues are inherently more complicated.

Iran complained more than any other country about Saudi security lapses last year. Tehran said the kingdom had failed to be a proper custodian of the holy mosques and should be removed from the hajj's administration. A quarrel over visa procedures this year means Iranians may not be able to participate in the hajj, after 61,000 Iranians made the pilgrimage last year. That undoubtedly suits Riyadh just fine.

Since Riyadh cut ties with Iran, it has pressed other Muslim states to follow suit. Bahrain and Sudan did so immediately, while the United Arab Emirates and Kuwait withdrew their ambassadors. Jordan withdrew its ambassador in April just after a visit by Saudi Deputy Crown Prince Mohammed bin Salman. This week, the Maldives, which relies heavily on Saudi assistance, joined the boycott and broke as well.

Riyadh knows most Islamic states will not sever ties to Tehran, but if a number do follow the Saudis' lead, Iran will lose face. Rather than ending its status as a pariah state following the nuclear deal with Western powers, Iran will still be out of the Muslim mainstream.

The rivalry between Saudi Arabia and Iran is intensifying, contributing to sectarian tensions in the region getting more violent and bitter. The sectarian strife has already reached unprecedented levels for modern times. It is almost certainly going to get worse.