Russia is carefully crafting its policies regarding Kurds, seeking to take a leadership role in the Syrian situation without actually offending anyone. 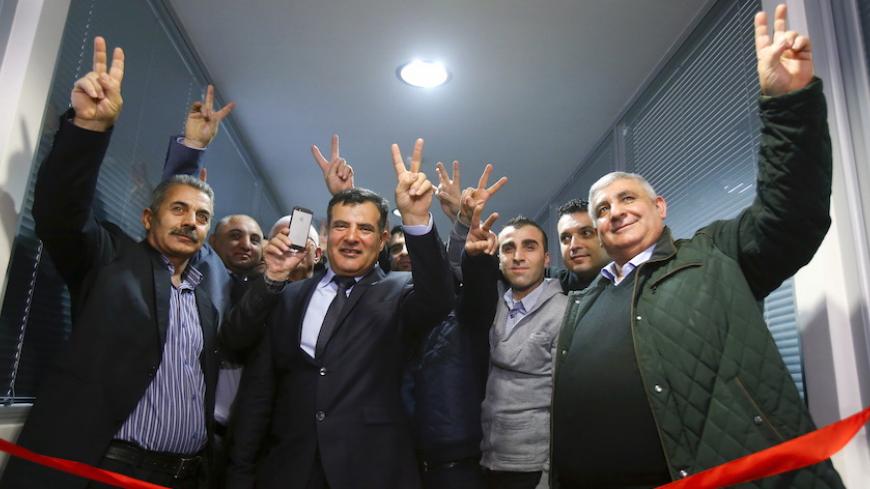 Participants pose for a picture during a ceremony opening a representative office of Syrian Kurdistan in Moscow, Feb. 10, 2016. Syrian Kurdistan is also known as Western Kurdistan, or the Rojava region — the term commonly used by Kurds living in Syria.

As Russia and the United States continue discussions on what a real cease-fire in Syria might look like, Moscow insists that Kurds be included in the Geneva peace talks. The idea, by and large, is shared by the moderate Syrian opposition and Washington, while Ankara understandably opposes the idea.

At the same time, Russia's position on the Kurds is more nuanced than it may seem. In their relations with Kurds, Russian decision-makers face two major narratives that are creating a dilemma.

On the one hand, some Russian analysts and diplomats believe that because of the size of the Kurdish population and the military power Kurds have exercised in Syria and Iraq, at some point there will be some kind of a Kurdish statehood in the region. Those who share this idea note that the Middle East is undergoing a massive transformation. The Kurds are playing a key role in vital battles against the Islamic State (IS) and other extremist groups, and they might use their victories to legitimize their claim for statehood. In other words, this camp believes Moscow should be prepared to address what the Kurds might see as a historic opportunity.

"In some form or other, they will get their statehood — sooner or later," a member of the Russian Presidential Commission on Interethnic Relations told Al-Monitor.

On the other hand, there are more cautious observers, including some in the government, who understand well that a drastic fragmentation of the region would inevitably trigger profound and unpredictable consequences and could backfire on those who sponsor it. Without a doubt, such a development also would deteriorate relations with affected countries — Turkey, Iraq, Syria and Iran. Proponents of this idea urge the Kremlin to stick to its advocacy for strong states as guarantors of regional stability. They are positive that Russia should support more delicate arrangements, such as autonomy. That, in their view, would represent an adequate compromise between central governments and the minority groups demanding independence. They say a new vision for the Middle East should involve ample powers for national minorities — not only Kurds, but also Yazidis, Christians, Druzes and others.

In Syria's case, Russia is using a mix of the two approaches. It sees federalization as a way to preserve the unity of the country; however, the problem is persuading Syrian President Bashar al-Assad. The Kurds as well as Assad may respectively see federalization as a prologue for their subsequent independence and a virtual partition of the country. Bearing this in mind, Moscow would not end its commitment to Assad's forces, but rather support Kurds in their fight against IS, mainly through Russia's channels with Iraqi Kurds as well as direct air cover. This may be a sign that even if Moscow is not currently promoting federalization publicly, it is ready to embrace the idea fully. By building contacts with both Syrian Kurds and the central government of Syria, Russia is laying out its own foundations for such a change.

The policy pattern is not new for Moscow. In 2007, when Russia opened its Erbil consulate in Iraqi Kurdistan, Russians abstained from a number of lucrative projects to avoid irritating Baghdad. Likewise, when it supplied Iraqi Kurds with arms and ammunition in March, it did so mostly through the central government of Iraq, to show that it was not undermining the state's integrity.

So when the Rojava Self Rule Administration opened its first overseas representative office in Moscow on Feb. 10, it was a sign that Syrian Kurds were seeking to promote at least two causes: Have Moscow support autonomy in Syria under a new constitution, and make sure Russia guarantees preserving their autonomy after the war in Syria ends.

Certainly, Moscow was proud to become the first to host such an institution; similar offices will soon be opened in France, Germany and maybe even the United States. The office, however, was given the legal status of a nongovernmental organization — not a diplomatic mission. Even more tellingly, there were no active-duty Russian government officials, diplomats or even members of political parties present at the opening ceremony. Their absence showed that even though Russia is tempted to exploit this resource, it understands it might echo negatively with Damascus and Ankara, which both expressed rare unanimity in their opposition to Kurdish autonomy in Syria — although each for its own reasons.

At the same time, Russia had its own interests in hosting the office. Two of these interests were self-oriented, including Moscow’s intent to build ties with the Kurds and its attempt to send a message to Assad that it has other options.

The other two interests had external aims, one of which was to pre-empt the Americans. Washington has long supported Kurds militarily. Yet, the United States was reluctant to move closer to Syrian Kurdish groups, with the US State Department rejecting "self-ruled, semi-autonomous zones inside Syria."

From the Russian perspective Moscow and Washington are not entirely rivals in their military support for the Kurds. Instead, there's a "division of responsibilities" — the Kremlin anticipates a potential political struggle for influence in the future. Thus, having an early edge in its political relations with Kurdish groups was a strategic calculation.

The second external interest had to do with Turkey and was based on three principal considerations:

Russia's once-friendly relationship with Turkey is precisely what makes Kurdish groups wonder if Moscow's strong and continuous support for them will last.

"Kurds are concerned whether Russia's alignment with us is temporary. If this is the case, Moscow will forget about us as soon as its relations with Ankara are restored," a leader of the Kurdish diaspora in Russia told Al-Monitor.

Though Moscow has expressed a genuine interest in Kurdish issues, so far it has been cautious in offering actual support. This is driven in part by the Kurds' history of internal conflicts and varying approaches to achieving their goals. And, at times, some groups have expressed less-than-friendly attitudes toward Moscow.

Nevertheless, there's no question that Moscow's vision for the future of the Middle East includes greater representation for the Kurds. Thus, the Geneva process is just the first step in embracing them, with future political engagement to follow, whatever form that might take. But it's evident there will be no cookie-cutter approach in Moscow's policies toward Kurds.