How drama therapy is helping Lebanese prisoners and society

A Lebanese psychologist has been working with inmates in Roumieh Prison to help them, through drama therapy, to forgive themselves, express themselves and develop empathy. 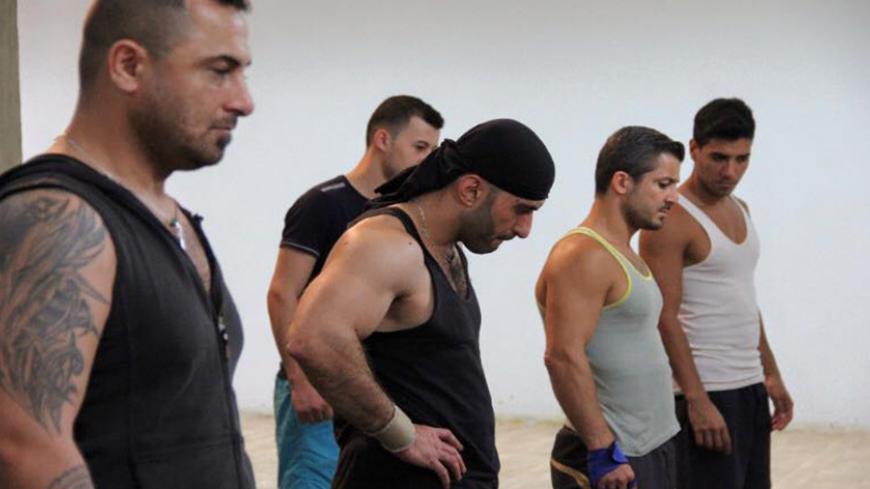 On May 18, psychologist and drama therapist Zeina Daccache opened the doors of Roumieh prison to a restricted but curious audience that had come to see "Johar … Up in the Air," a play performed by inmates. Focused on the mentally ill sentenced to life, the play challenges the way society looks at prisoners while allowing the incarcerated to express themselves and perhaps find some sense of liberation.

Drama therapy, according to the North America Drama Therapy Association, "can provide the context for participants to tell their stories, set goals and solve problems, express feelings, or achieve catharsis." These are the points Daccache has stressed during 10 years of working at Roumieh. She offered theater to the inmates for the first time in 2009 with the play "12 Angry Lebanese." That was two years afters founding Catharsis, the first drama therapy center in Lebanon and the Arab world.

"Johar… Up in the Air" features a cast of 38 inmates sentenced to life who tell the stories of mentally ill inmates, who also have life sentences. The latter live in a separate building, the Blue Building, to which they are confined.

"When I was doing therapy with mentally ill people in the prison, I showed images of them to inmates serving life terms, who became sensitized to their condition," Daccache said. "It was the first time they realized what a mental illness was, and they chose themselves to interpret one of these real-life stories. They have a lot of problems. To forget their problems like that and carry the weight of somebody else, it's a huge step. Others, like the 'commander' you saw in the play, chose to remain focused on their own story. He had the idea that if he were mentally ill, he would become this maniacal character, always in the clouds, who thinks he is back with his militia. It's a way to help yourself face your demons. It is one of the benefits of drama therapy."

Over the course of two hours of dance, songs and performances before an audience, the inmates talk about the unknown and the locked away from society, while facing their fears and overcoming their condition.

To work with people in a more personal way, some therapists turn to art therapy. Myra Saad, an art therapist and mental health counselor, talked to Al-Monitor about such therapy, which is ​"more related to the visual arts."

"It is different from dance, music and theater because patients have a tangible product at the end of the sessions," Saad said. "The choice of material indicates where to go, along with the personal goal of the patient. For example, for people who have a problem expressing themselves, we tend to use more fluid material, like gouache, while with someone looking for structure, we will use collage or colored pencils. In drama therapy, you can create a situation and work it out. Art therapy means acting on something and then acting on yourself."

Saad worked with Daccache in prisons around the time "12 Angry Lebanese" was being produced, which gave her access to a prison population. "They feel a lot of anger, suffer from low self-esteem and self-hate because of what they did, as well as a lack of empathy, especially those who have mental health issues. Working on imagination with other people in the same conditions can help them let go of their anger, love themselves more and find a balance between feeling responsible and forgiving what they did, while developing empathy toward others, seeing them as human beings."

Whether those undergoing therapy want to break out of a pattern, be listened to or be productive, the ameliorating effect is real, Daccache asserted. "They feel human again, free. They can say anything without being judged. They start to trust themselves and each other, which is amazing, because real friendships can grow in this jungle that is prison," she said.

Daccache's initiatives are not only concerned with the well-being of the inmates. She stated, "A performance enacted by prisoners in front of society at large, based on their own stories, could make a change in it, in society, and ultimately, in the policies toward prisoners." Therefore, in "12 Angry Lebanese," the focus is on Law 163 of the Lebanese Penal Code, which allows for reductions in sentences.

"The law existed in 2002, but began to be applied in 2009, after then-Ministers of Justice [Ibrahim Najjar] and Interior Ziad Baroud saw the play," Daccache said. "With the current play ['Johar'], we hope to challenge Article 232 [and 234] of the Penal Code, which stipulates that mentally ill people should remain locked away until a cure for insanity is found, which condemns them to life!"

Armed with a psychiatric study conducted in two Lebanese jails and a legal study comparing Lebanese legislation to other Arab and European countries, Daccache intends to lobby parliament for a law-related project on incarceration of the mentally ill.

"We always invite ministers, judges, lawyers, members of parliament and journalists, who spread the message, and decision-makers to reflect on a situation," she explained. "The others who come are curious people, but we are not going to stop at this audience. Through a documentary, we are going to tour Lebanese schools, universities, clubs and events to spread awareness of the issue. Sometimes, people who see a play open NGOs to help on the ground, others offer yoga classes for example or donate money for a cause. It has a real effect on society."

Proving Daccache's point, during the May 18 performance, a number of audience members cried, apparently moved by the reality of those imprisoned for life. Nothing appears to be being done on the political front to improve their condition, especially mentally ill inmates. The drama therapist pointed out, however, "At least, they have a psychiatric unit in Roumieh, the only one in Lebanese jails."

At Roumieh, some 3,500 men share a building built for 1,000 people, with barely enough water, air conditioner, clothing, mattresses, blankets and sanitation for a dignified survival. The poor conditions led to riots in June 2015. Following the unrest, Lebanese authorities and the International Red Cross developed a plan to finance the upgrading of conditions. It is unclear whether conditions have actually improved.