Producer and director Zeina Daccache’s drama therapy program, Catharsis, offers Lebanon’s migrant workers and other disadvantaged populations a way to connect with each other and a rare outlet for self-expression. 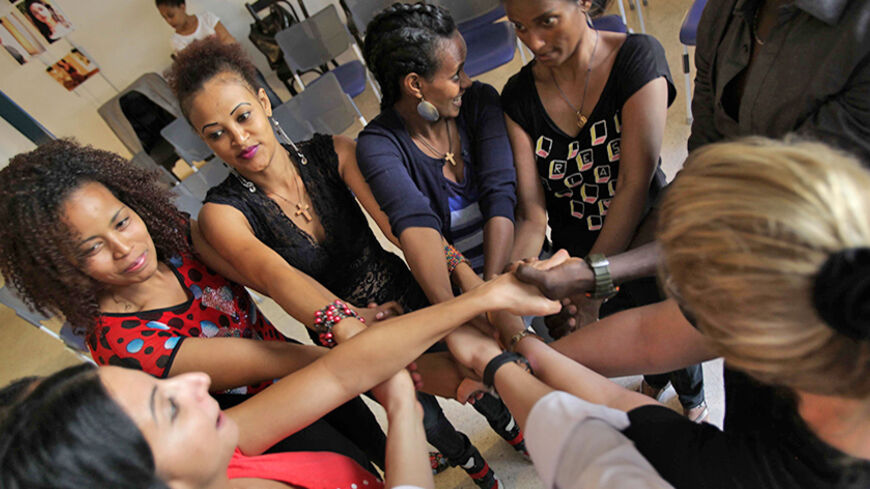 Members of the The Catharsis Center for Drama Therapy warm up before performing in Hamra, Nov. 2, 2014. - Tamara Abdul Hadi / Catharsis-LCDT

HAMRA, Lebanon — Inside the AltCity café in Hamra on a Sunday morning, about 15 people from an array of countries are milling around, talking and waiting. The room is filled with color, from armbands and earrings proudly displaying the colors of the Ethiopian flag to neon-colored headscarves and flashy blouses. Suddenly, Zeina Daccache sweeps into the room and everyone lights up, smiling at each other, the excitement palpable. It is time to act.

For the past 10 months, migrant workers have been working with Daccache to create a play that will bring attention to both their individual experiences and the collective stories of their communities in Lebanon. The aims of the project — made possible with funding from the Norwegian Ministry of Foreign Affairs and in collaboration with the collective Migrant Workers Task Force — are to provide drama therapy sessions over the course of a year to culminate in a theatrical performance by the group in December.

The final performance is important, but it's the journey that helps the workers build the confidence to get there. Daccache has promoted drama therapy in Lebanon since she co-founded her non-profit organization, Catharsis: Lebanese Center for Drama Therapy, the first of its kind in Lebanon and the entire Arab region, in 2007. This type of therapy uses theater and art to help individuals and groups create new behaviors, meaning and skills and apply them to their lives, from solving problems to unearthing repressed emotions.

Catharsis offers services to disadvantaged populations such as migrant workers and gives them a rare outlet for their voices and feelings.

“Since my early years at university while studying theater, acting and directing, I had the following recurrent thought: Theater can live in the most forgotten places and grow in the most difficult situations,” Daccache says.

That idea has been ubiquitous in her work. She has now done projects with a variety of groups since she got her master’s degree in drama therapy, including women in southern Lebanon, the mentally ill, male and female prisoners, drug addicts and now, migrant workers.

Daccache says that she has always planned to work with this community, explaining that the migrant worker “population is very much in need to express its needs, voice out their rights.” Through this dramatic technique, they have a chance to explore their stories, positive and negative.

The group's participants are from everywhere: Syria to Senegal, South Sudan to Cameroon, male and female. Their rehearsals focus on improvisation, to get them comfortable putting themselves in another person’s shoes. There is no guarantee that any particular creation will make it into the final play, but the workers have an opportunity to express issues they deal with on a daily basis, such as judgment and racism.

Astou Ciss, from Senegal, is wearing a bright orange headscarf. She seems shy at the start of rehearsal, but once she takes her place in front of her peers as “Madame Randa,” she is a different person. Madame Randa does not approve of her migrant domestic worker participating in this play and thinks it will only lead to more misbehavior. “Instead of wearing those clothes that are so light, why doesn’t she just wrap herself in the tablecloth!” Madame Randa exclaims with displeasure.

All the while, Daccache is furiously scribbling on a piece of paper. Improvisation is an important skill for them to master, as the play will be a “self-revelatory performance,” she says. Through using storytelling, images, props and many other tools during intensive drama sessions, the content of performance has been slowly coaxed out of the group, rehearsal by rehearsal. From the start to now, nearly the finish, the process has been a collaborative one between her and the group. The notes she has been taking about the workers’ realities in Lebanon and their cultures back home are now taking shape as final topics, stories and characters for the play.

The rehearsal wraps up with a group of women doing an Ethiopian dance, directed by Daccache. Even those not participating are moving and tapping feet to the music, filming with their phones. Their support for each other is evident, and confirmed by many of the 15 as we sit in a circling talking after the session is finished.

“At first, we weren’t comfortable with each other. We were so shy. We feel there’s a lot of change. I have the power to do it. I’m not shy anymore, I can say my opinion. I have my freedom. Personally for me, I didn’t go out for two years. Now I don’t care how people talk about me,” says Jad Abboud, who was living in Aleppo until he fled the fighting to Lebanon in November 2011. He now works primarily as a cashier in Jounieh, but comes to Beirut every Sunday, both for rehearsal and to learn English in classes provided by the Migrant Workers Task Force.

Abboud is the only Syrian in the group, but over the last 10 months, the cultural divisions between the participants have receded. They even have a WhatsApp chat group, where they stay in touch when not together.

Olga Ond, from Cameroon, stands around with some friends after the session finishes. Ond came to Lebanon in March 2012 for employment in domestic work. She has been in the north with her employer’s family for the past three months and is freshly back with the group. She missed the Sunday tradition sorely while she was away.

“[Drama therapy] gives me courage, and I feel like a person, not just a housemaid,” she says.

In a country where migrant workers are still fighting for basic rights and face discrimination on a daily basis, drama therapy has given them the strength to tell their stories on a large scale.

Daccache’s aim is to provide them with a way to finally be heard. “I give them a tool,” she says, “the one I know and master: therapy plus theater to express themselves and to voice out their own messages to Lebanese society as a whole.”