How schizophrenia patients in Turkey are finding relief on stage

In a small Turkish city, a pioneering psychiatrist has achieved remarkable success in treating schizophrenia patients with theatrical improvisation. 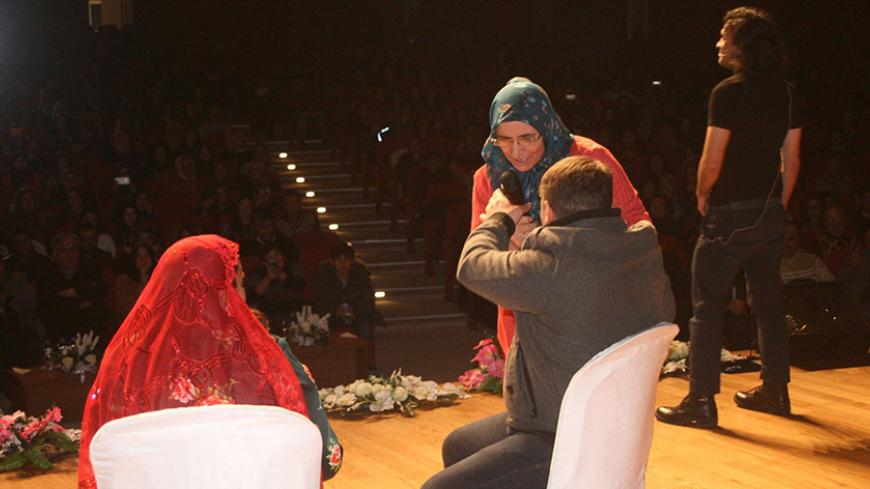 Cast members of the "Count Me In" troupe perform their play in Aksaray, Turkey. - Gokten Ozturk

AKSARAY, Turkey — In a state hospital in Aksaray, a small city in Turkey, 30 patients with schizophrenia have embarked on a new life thanks to an unusual therapy their doctor developed. Away from their families and society, withdrawn into themselves and tormented by false beliefs, the patients have performed 20 plays across Turkey over the past year as part of the innovative therapy, and many psychiatrists are closely watching. Along with its positive impact on the patients, the theater stage has served as a means to overcome fear and prejudices against schizophrenics in society.

The “Count Me In” troupe — the first comprised of patients with schizophrenia in Turkey — are expressing themselves through a play called “A New World Through a Schizophrenic Eye.” Everything on stage is improvised, allowing the actors full freedom of expression. There is no script, and their laughter, anger or weeping is all real.

The director of the project, Dr. Basri Koylu, also takes part in the show, which is an hour and a half long and features music and dancing. It ends with a monologue by the psychiatrist himself. Highlights of the show include solo performances of rap music or Michael Jackson’s “Thriller,” and even a white-clad performer doing his best to keep up with a professional whirling dervish performing to live music played by a traditional four-man band. Some patients participate by simply watching.

The opening scene takes the form of a quiz show. A young woman holds the microphone to another, asking, “Sabiha, who is Turkey’s president? Can you tell us?” Sabiha gives the right answer and everyone applauds her. After some more dialogue that sounds infantile or nonsensical, the play moves on to scenes that reveal the realities of the patients’ daily lives. In one scene, a patient speaks softly to another about dinner plans so as not to wake a sleeping child. Next, a village headman breaks the news to an anxious family that their soldier son has been killed. The mother of the fallen soldier cries, “My son is gone. What am I going to do now?” and faints. A neighbor tries to console her, saying, “Please don’t cry. He is in heaven now.” Later, the audience erupts into laughter over a scene depicting two women competing for one man's heart.

In an interview with Al-Monitor, Koylu said the project was presented at Turkey’s 52nd Psychiatry Congress six months ago and received promises of support from some of the country’s leading universities. “The psychiatric community is wondering how we managed to accomplish this. Several colleagues and I are now working on a scholarly project on the issue as a new method of treatment,” he said. “Before this program, my patients would not converse even for five minutes. Now they are staying on stage for hours, impressing their audiences. They want to perform more than once a week. They’ve become strongly attached to the stage.”

Stressing that drug treatment alone is not enough “to integrate patients into life,” Koylu said he saw acting and similar activities as a new form of treatment complementing drug therapy that could resonate internationally if properly understood and affect domestic and international approaches to the issue. “An international psychiatry congress was scheduled to be held in Istanbul this year and we were planning to present the project there. The event, however, was canceled because of terrorist threats,” Koylu said. “Our troupe receives frequent invitations from abroad, but we are unable to go because of lack of financial support.”

The most recent invitation they had to decline came from the German state of Bavaria, Koylu said. He's eager to have his patients perform abroad to spread hope to other patients with schizophrenia. “We’ve succeeded in changing the patients. Perhaps we’ve accomplished something they’ve failed to do even in the United States. This should be showcased and promoted,” he said.

Asked about the difficulties he encountered while working on the project, Koylu replied, “There was this patient who was so paranoid that when I told him I planned to do theater with him, he retorted, ‘Are you a cop or a spy? What are you after?’ and ran away. Then, after he saw our work, he joined us on his own. Now he’s the favorite actor of the troupe.”

Popular conceptions about schizophrenia are heavily affected by hearsay and misinformation. Asked whether his patients had displayed any violent or threatening behavior, Koylu said, “There is no scientific truth in [the belief that] patients with schizophrenia are dangerous people. This is one of the things I try to explain during the shows. I work very closely with them, and I’m with them on the stage as well. I do what they do. That’s the message I’m conveying to the audience: These are not dangerous people. If they were violent, they would have attacked me in the first place.”

The troupe was invited to the 27th Ankara International Film Festival, held earlier this month, and other institutions have begun to follow in its footsteps. In March, for instance, 18 patients from the mental health center of a state hospital in Ankara made their debut on stage with a musical about the Battle of Gallipoli. Last year, a similar troupe took the stage in the northern city of Amasya, performing a play as well as folk dances and songs. Their psychiatrist, Dr. Nadide Gurses, also stressed the importance of complementary therapies along with medication. “We are treating them not only with drugs but also by incorporating them into society. Such activities boost the patients’ self-confidence,” she said.

Medication alone has come to be seen as the most convenient way to treat schizophrenics, an approach that basically numbs the patients. For Koylu, however, “a person who doesn’t feel, speak, laugh or cry is not alive.” The Turkish doctor’s stage therapy deserves support, for his patients, relishing the joy of acting, are no longer subdued. All their emotions are alive and they communicate with the people around them. Their medication doses have largely been reduced. The patients, many of whom would normally lead a life of lethargy under the mind-numbing effect of drugs, are now nagging Koylu, “Doc, when are we rehearsing?”