Syrian Kurds have big plans to expand the first university based in Rojava, which they launched just last year. 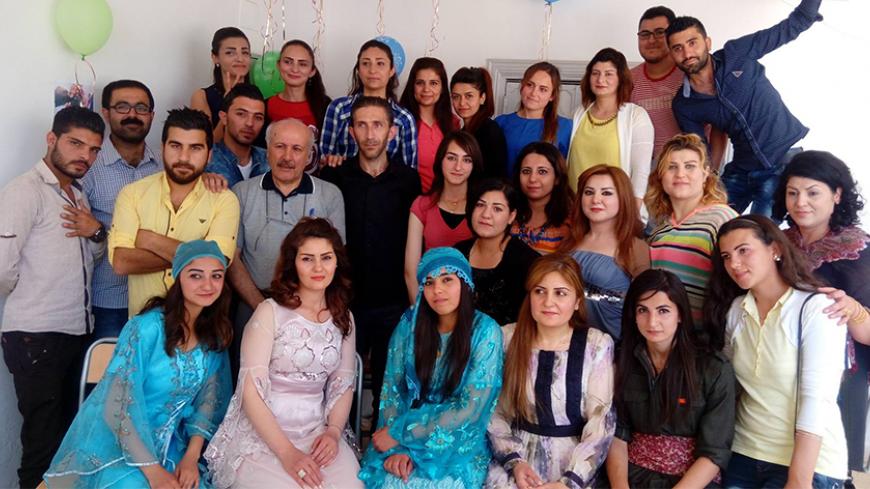 A group of dedicated educators has found a way to circumvent the war that has disrupted all aspects of Syrian life. Since students can't travel to universities to study, a university has come to them.

Afrin University, the first university based in Rojava (Syrian Kurdistan), began registering students in August. Though it is not yet accredited, the school's officials already plan to expand its offerings and facilities.

“One of the objectives of the university is to bridge the large gap in the educational field as a result of the Syrian war," Abdul Majeed Sheikho, dean of the arts faculty, told Al-Monitor. "The university gives the students an opportunity to complete their studies and to achieve their educational goals. This is a better solution than the decision to migrate.”

The school's teachers hail from the Afrin area and are required to have doctorates or master's degrees in their specialties. Youssuf said 222 students are enrolled: 121 in the literature program, which includes a Kurdish-language section, 50 in engineering and 51 in economics. The school includes institutes for studying medicine, topographic engineering, music and theater, business administration and the Kurdish language.

“Work is in progress for the opening of the faculty of agriculture and the faculty of human medicine in 2016, and probably the media faculty,” Youssuf said. According to him, the university also has plans for a significant science program as the school expands.

“The university has allocated a 50-hectare [124-acre] area to construct a permanent headquarters for the university to accommodate 10,000 students in the future,” he said. The school now is located in the agriculture high school building in the city.

The university requires five years of study for an engineering degree and four years for other specializations. Students with an industrial high school certificate are admitted to the mechanical, electrical and electronics department, provided their numbers do not exceed 3% of the total number of students.

Afrin University has opened two sections in the arts department in the Kurdish language, teaching multiple courses divided over four years, where students are taught classical and contemporary Kurdish literature, as well as Kurdish folklore. Sheikho noted that the Kurdish language is taught in universities in Paris, Moscow and Germany.

The university was founded under the Kurdish democratic self-rule system, which has been seeking for two years to introduce the Kurdish language into elementary grades. In 2016, it imposed the Kurdish language on Kurdish students in the Kurdish-controlled areas (Afrin, Kobani and Jazira) without relying on the Arabic language or including the courses taught by the Syrian regime, which sparked widespread controversy between Syrians and Kurds.

The university is also facing controversy, accused of integrating the ideology of Kurdistan Workers Party (PKK) founder Abdullah Ocalan into the curriculum and being subordinated to the Democratic Union Party (PYD) — which many believe espouses the same ideology as the PKK. Afrin University offers a course called “The Nation's Democracy,” which sounds similar to the theory of the prolific but imprisoned author.

Youssuf denied this correlation, saying, “Though the name of the course is similar to the name of Ocalan's theory, the course is focused on various historical, social, religious and philosophical issues aimed to increase the student’s knowledge and culture.”

He added, “Even if the course [name] matches Ocalan’s theory, it is no different from the courses on the theories of [John Maynard] Keynes, [Adam] Smith, [Karl] Marx and Samir Amin."

Sheikho, the arts faculty dean, said, “The Nation's Democracy is a series of lectures on the evolution of the universe and the stages through which human communities have passed to entrench the idea of ​​brotherhood and harmony between peoples.”

Ahmed Shafei, an economics student, said the opening of Afrin University is a dream come true. He told Al-Monitor that he had wanted to travel to Turkey to complete his studies before Afrin University was launched.

Shafei knows that the university is not yet accredited, but he told Al-Monitor, “When the University of Aleppo first opened, it was not accredited.”

Shafei studies economics because he believes that the newly established Kurdish self-rule areas need to build on a solid economy to prosper. When asked about the introduction of ideology into the educational sector, he said that the economy tract provides a well-rounded curriculum in the principles of economics, management, accounting, statistics, mathematics, ecology, English, Kurdish, the Nation's Democracy and partial economic analysis. He added that he has heard Nation’s Democracy is a fun and cultural course, though he has yet to take it.

“Personally, I did not see any downsides or negative impact of this course on the educational process. Some university students have complained about the course, as it was difficult to translate, but they did not complain about its content,” he said.

Youssuf said the idea for Afrin University started in 2013. “We wrote to universities in Russia asking them to open a branch in the city of Afrin, but our request was rejected for political reasons. We also reached out to the Ebla Private University near Idlib, supervised by the University of Damascus, but the Ministry of Higher Education rejected our proposal. We contacted universities in Turkey and Finland, which also refused our request,” he said.

He noted that many universities in the world emerged from humble backgrounds, such as the University of Sulaimaniyah in Iraqi Kurdistan and al-Zahraa University in Gaziantep.