Syrian students, aware that Russian influence is in their country to stay, see learning Russian as a key to both higher education and employment. 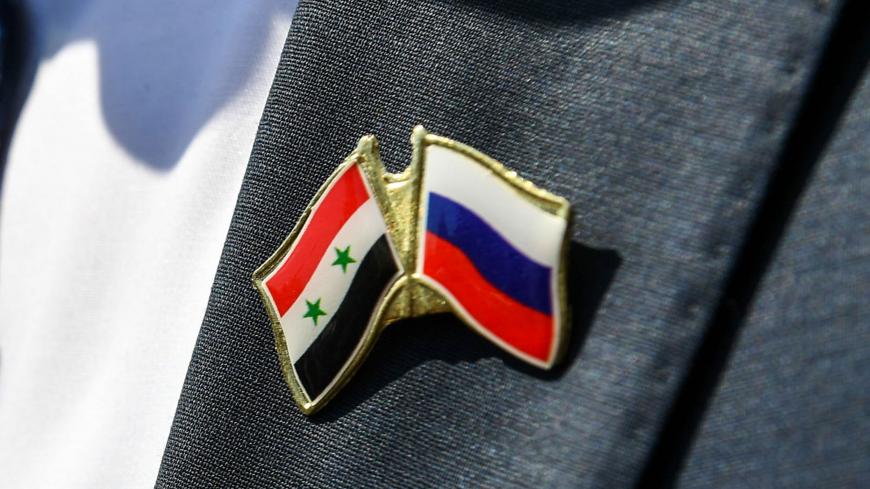 A lapel pin showing the Russian and Syrian flags is seen in Yalta, Crimea, April 21, 2018. - Maxim Grigoryev\TASS via Getty Images

ALEPPO — As relations between the Syrian regime and Russia develop with the signing of scientific, economic and cultural agreements, Syrians from all walks of life are signing up for Russian language courses in regime-controlled parts of the country. Opportunities to learn and develop Russian in Syria range from contests like the "Russian Olympics" to universities and private courses offered by associations such as Al-Wafi.

Vadim Zaichikov, the director of the Russian Centre for Science and Culture in Beirut, visited Al-Baath University in Homs in April to discuss the introduction of the Russian language into the curriculum and creating a Russian language department. Al-Baath is the third largest university in Syria, offering its 140,000 students prestigious music degrees as well as technical ones such as oil and gas engineering. The university’s newly appointed dean, Abdelbaset Al-Khatib, is a graduate of St. Petersburg State University.

In the capital, the University of Damascus opened a department of Russian language and literature in November 2014 and relocated it to a new, larger building last year. The department has become the univeristy's largest foreign-language department, claims Sputnik News, a news platform run by the Russian government-owned news agency Rossiya Segodnya. Its first batch of Russian language students graduated in October 2018, and the Ministry of Higher Education created a Russian center for coordination and cooperation at the University of Damascus in 2017.

Radwan Rahal, a lead Russian language instructor at the Syrian Ministry of Higher Education, told Sputnik News in August that the Russian language was introduced in 2014 as a foreign language in Syrian schools for grades 7-11 and he expects the number of secondary students studying Russian to hit 22,000 in the next academic year.

Russian is also popular among the youth in Aleppo, Syria’s industrial and commercial hub. Young people expect relations with Russia to remain strong and hope acquiring the language will allow them to find jobs with the Russian projects in the country during the post-war reconstruction. Many want to learn Russian to pursue further studies in Russia.

“The old Russian-Syrian relations in terms of scientific research are apparently being renewed," Abdul Monem Halabi, a former lecturer at the University of Aleppo, told Al-Monitor. “Trade relations are also expected to develop, so young people think speaking Russian will give them an edge.”

The Russian language division of the Higher Institute of Languages at the University of Aleppo has become attractive to many students who want to graduate with a knowledge of Russian.

“I started learning Russian in 2018,” M. H., a student at the Faculty of Engineering, University of Aleppo, told Al-Monitor. M. H. said, “I believe it is an important language for me to find a job after finishing my studies,” adding that Russian business is likely to be heavily involved in the country’s economy in the future.

M.H. said that he was not alone in wanting to learn Russian. “There is a large number of students and graduates who aim to work for Russian companies once the war ends and the reconstruction phase kicks off. Some of my colleagues want to pursue their higher education in Russian universities,” he said.

Hisham Eskeef, a professor of Arabic language who resides in the Aleppo countryside, told Al-Monitor that the Russian language teachers at Aleppo’s private institutes and the Higher Institute of Languages at the University of Aleppo are mostly Syrians who graduated from Russian universities with majors such as pharmacy, medicine, arts, political science and other specialties.

“I believe that the major reason behind the high demand for learning Russian and the Russian support for this cultural and educational sector come as a part of the competition with Iran,” he said. “They're both working to establish their presence in Syria via the economy, investments, military, language and culture.”

Rasheed Shikho, a former faculty member at the University of Aleppo, agreed that there is high demand for learning Russian in many Syrian provinces where the regime is in control, not only in Aleppo. “The Russians' absolute control over the state’s security, services and military sectors as well as the trade exchange is a direct reason behind that,” he told Al-Monitor.

He said that Syrian citizens in various service and commercial sectors are learning Russian to provide services, work and trade with the Russians.

“There are now Russian signs in shops and the shopkeepers across Syria have learned a few words of greeting in Russian,” he said. “University students are learning Russian, hoping to study in Russian universities and work in the ports.”

“Russia is quietly planning to remain in Syria and using culture and language as tools, exploiting the hopes of university students who dream of getting a job in Russia,” he said.