Have Israel, PA figured out how to stop attacks?

The Palestinian Authority is using a two-phase approach against potential attackers, first approaching school students and then talking to their parents. 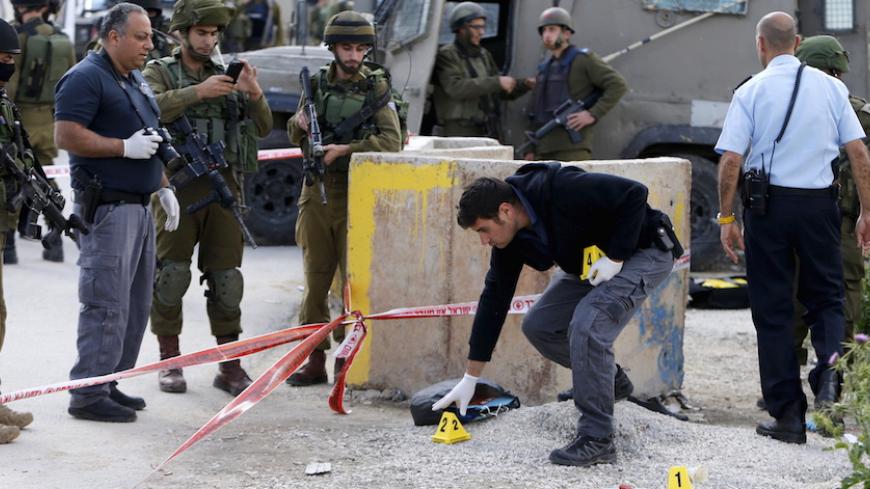 Israeli forces inspect the scene where a Palestinian, whom the Israeli military said attacked Israeli soldiers with an ax, was shot dead at the entrance of Arroub refugee camp, north of the West Bank city of Hebron, April 14, 2016. - REUTERS/Mussa Qawasma

Israel and the Palestinian Authority (PA) estimate, with great caution, that the wave of terror that broke out in October has been stopped. There are many reasons for the significant decline in terror attacks against Israelis and the motivations of would-be attackers. The most significant reason is Israel’s approach of restraint. This is an essential difference compared with the approach that led Israel to use excessive military force at the beginning of the second intifada (2000-2005), which exacerbated the situation by increasing the motivation of Palestinian organizations to gather forces and respond, and the support of residents of the Gaza Strip and West Bank for acts of revenge against the Israelis.

Unlike the past, these efforts aren’t targeted at the armed Palestinian organizations and terror activists in the territories, but at locating the “individual assailant.” Most of the recent attacks, excluding the attack on bus No. 12 in Jerusalem, which was attributed to a Hamas cell in Bethlehem, have been carried out by young people who did not belong to any organization.

At first, Israel and the PA believed that it would be difficult to impossible to foresee the intent to attack on the part of unaffiliated youths, and therefore also difficult to formulate an effective warning system.

Despite these assumptions, in recent months the Palestinian security services have examined Facebook pages of young people who carried out attacks and those of young people who planned an attack but backed out at the last minute. The Meir Amit Intelligence and Terrorism Information Center has worked in a similar fashion. And so it became clear that most attackers gave a broad hint on social media of their intention to carry out an attack. There are many examples.

For instance, there was Mohand Halabi, who carried out an attack in Jerusalem in October where Rabbi Nehemiah Lavi and soldier Aharon Bennett were murdered. Halabi wrote on his Facebook page before he went out to attack, “What’s happening at Al-Aqsa [Mosque compound] is what’s happening to our holy sites and the path of our prophet … I don’t think the people will accept the humiliation. The people will go on intifada.”

Or, for instance, Fouad Abu Rajab al-Tamimi, who carried out an attack on Saladin Street in Jerusalem in March where two policemen were injured — one fatally, the other moderately. Tamimi left a goodbye letter for his parents, where he wrote, “Don’t think of the reason for my action, I did it in solidarity with the martyrs.” A few days before he set out to attack, he shared on his Facebook page “the ten commandments for every martyr” — a document written by another terrorist, Bahaa Aliyan, who carried out a shooting and stabbing attack at the Jerusalem neighborhood Armon Hanatziv in October.

On April 26, Israeli security forces arrested three Palestinians in an apartment in East Jerusalem on suspicion that they intended to carry out an attack. A Palestinian security source, speaking on condition of anonymity, told Al-Monitor that their arrest was aided by the Palestinian security services having established a monitoring system for “suspicious profiles” of young people from the West Bank.

“Some of the youths praise martyrs,” said the source, but qualified this statement by saying that not every Palestinian who posts a photo of a martyr or praises a martyr is planning an attack. “There needs to be another hint [for the intent to attack] that would light the red warning signal for us.”

About a month ago, said the source, unusual activity was identified on the part of two young women from Ramallah who exchanged suspicious messages. They spoke about protecting the Palestinian people, their wish to end the humiliation of Zionist occupation and their desire ''to contribute to the future of the exalted people in its homeland Palestine.'' In this case, the girls were not arrested.

The Palestinian security services work to prevent attacks through what they call “the educational approach.” It takes place in two steps, according to the level of determination to carry out an attack as it has been identified on social networks.

The first, and preferred step, is instruction in the classes attended by the young Palestinian who was identified as interested in carrying out an attack. Representatives of the PA are sent to the classrooms, where they pleasantly explain to students why they shouldn’t carry out an attack. They mostly speak to the young people on the emotional plane and note that they would cause great pain to their families, and that their acts would not bring the liberation of their homeland.

“We also explain to them that the PA is working on the diplomatic level and intends to achieve a Palestinian state with the support of the world,” the Palestinian source said. “We further explain that Palestinian President Mahmoud Abbas opposes violence and that the Palestinians must prove their maturity and responsibility. Even when young people claim that they have experienced violence and pain from the Israelis, the response they get is that we must show that we are better than [the Israelis] and that we don’t act in violence. We tell them ‘Don’t die, live in order to create change,’ and that they will determine the future of the Palestinian people.”

A hint at the educational activity that has brought, according to sources in the PA, a significant decrease in the motivation of young people to attack, could be heard in what Abbas said in an interview with Channel 2 journalist Ilana Dayan on March 31, telling about searches in Palestinian schools, followed by the message ''We want you — Palestinian youth — to live.''

The second, and less preferred step, is to personally approach the parents of youths who Palestinian security is convinced are planning an attack out of despair, after it becomes clear that the talks at school have not helped to tone down their Facebook messages.

“We’re working hard to save the lives of our young people,” said the Palestinian source. “We know that because of the right-wing Israeli government and the incitement in the Israeli media the huge effort we’re making is not appreciated [by Israelis]. We are not waiting for your thanks or for your appreciation, but at least don’t accuse us of incitement,” he concluded angrily.

If the relative quiet will continue and the educational approach will turn out to be effective, we could be convinced that an intifada can be stopped with wisdom and with judgment, and not only through massive aggression.