Palestinians get ready for hard-line Liberman as defense minister

The appointment of ultranationalist Avigdor Liberman as Israel's defense minister sparked outrage among Palestinians, who already regard President Benjamin Netanyahu's government as one of the most extreme in Israel’s history. 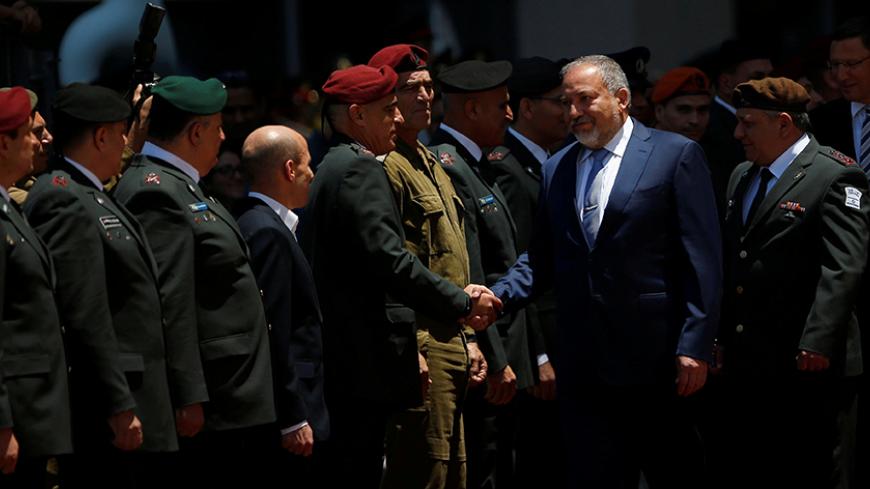 Palestinians did not need the appointment on May 25 of Avigdor Liberman, head of Yisrael Beitenu, as defense minister to be convinced that the government, led by Benjamin Netanyahu since May 15, 2015, is the most right-wing and extreme in the history of Israel. Under this government, which brought together different religious and nationalist parties, the peace negotiations stopped, settlements expanded and the Jerusalem intifada erupted in October 2015.

Liberman’s appointment sparked several Palestinian reactions. While Hamas deemed his appointment as a sign of increasing racism and extremism in Israel, Fatah said the appointment is like a bugaboo scaring Palestinians given the empty threats he makes in the media. For its part, Islamic Jihad stressed that Liberman's appointment is proof of the rising fascism among Israeli leaders.

Youssef Rizqa, the former information minister in the Hamas government, told Al-Monitor, “The inclusion of Liberman in the Israeli government is a success for Netanyahu as it would rescue his government from collapsing amid no significant differences between the two men — since both share similar right-wing positions toward the Palestinians and refuse to make concessions. However, Liberman is calling for the expulsion of the Arabs from the land of Palestine while announcing the death of the two-state solution and the end of negotiations with the Palestinians. Although he is annoying and controversial, we do not fear him. He is being used to threaten us. He may not declare direct war on Gaza, but he may resort to assassinations of Palestinians and activate the Israeli military action against the tunnels, which would provoke a reaction on the part of the resistance. Things may spiral out of control and a war may indeed break out, which may be according to him a prelude to his radical approach to Hamas’ future takeover of Gaza.”

What may be a cause for concern among Palestinians as far as Liberman is concerned is that he accused Netanyahu of failing to confront Hamas, which is threatening Israelis in the Gaza envelope. On April 16, Liberman claimed that Hamas plans to occupy the southern Israeli settlements in the next war, knowing that Israel discovered a Hamas tunnel inside its territory April 18. This could lead Liberman to carry out the threats he made March 9 concerning the assassination of Palestinian leaders in a military confrontation.

In conjunction with the appointment of Liberman, Israel's Channel 10 reported May 23 that Palestinian President Mahmoud Abbas is afraid of Fatah leader Mohammed Dahlan’s relationship with Liberman, who will seek to provide the necessary conditions for the return of Dahlan, Abbas’ archrival. This, in turn, upsets the latter who is aware that Liberman and Dahlan met in Paris in January 2015, according to reports. They both have a common interest to eliminate Abbas from the political scene; Liberman believes Abbas to be an instigator of violence against the Israelis, and Dahlan considers Abbas’ survival as an obstacle in his way up the ladder of the Palestinian presidency.

Abdullah Abdullah, the head of the political committee of the Palestinian Legislative Council and member of Fatah’s Revolutionary Council, told Al-Monitor, “Liberman might try to tamper with the domestic Palestinian arena given the previous threats he made against President Abu Mazen [Abbas] on several occasions. He may carry out assassinations against Palestinian leaders or fabricate a crazy war in Gaza to prove to his political opponents in Israel that he is strong. However, Netanyahu will continue to dominate the political and military decision in Israel, and the cohesion of the domestic Palestinian front will foil Liberman’s schemes against it. This requires the Palestinians to confront this racist appointment in a more cohesive way.”

Palestinians still remember Liberman’s fiery statements against them, most recently on April 20 when he announced that Israel must not sit idly by as Hamas digs tunnels on the Gaza border. Liberman vowed to assassinate Hamas leaders should they fail to bring back the soldiers who went missing in Gaza in summer 2014, and asked them to start organizing their funeral arrangements.

Ghazi Hamad, Palestinian deputy foreign minister in the Gaza Strip and one of Hamas’ prominent political leaders, told Al-Monitor, “Hamas has previously encountered Israeli leaders who were far more vicious than Liberman — such as Ariel Sharon who headed the Israeli government between 2001 and 2005, and possessed much greater powers than Liberman. He assassinated great Hamas leaders on a daily basis, such as Sheikh Ahmed Yassin, Abdel Aziz al-Rantisi, Ibrahim al-Makadmeh and Salah Shehadeh. But he could not eliminate Hamas, and today Liberman comes at a time in which Israel may not want military wars with Hamas — because of the losses it endured in the last three wars in 2008, 2012 and 2014.”

Hamad, who has been conducting daily talks with officials and foreign ambassadors visiting the Gaza Strip to oversee the political, security and economic conditions, said, “Hamas' position in dealing with Liberman stems from the Palestinian national consensus to implement the truce with Israel that has been agreed upon since the end of the last war on Gaza in 2014. However, Hamas will not allow the hostile and exaggerated Israeli bombardment to continue in response to any missile launched from Gaza. If Liberman decides to expand the aggression on Gaza, any Hamas move in response to Liberman will be in accordance with each field position separately, in coordination with the rest of the Palestinian forces.”

But Palestinians know full well that the Liberman who was part of the opposition will not be the same Liberman who has been appointed as defense minister, given that the latter will be surrounded by the army's chief of staff and the heads of the security services, who may want him to calm down and quieten his threats against Hamas. The movement has been wrapped up the past two years, after the last Gaza war in 2014, in building up its potential. In other words, the last military confrontation with Hamas was nothing but a mere sample of what the two sides may witness in the next round, should it take place.

Wasef Erekat, a retired Palestinian major general, told Al-Monitor, “Liberman’s joining of the Defense Ministry will coincide with the next military escalation with the Palestinians, especially in Gaza. [This confrontation] will witness the implementation of a set of assassinations against leaders of the resistance amid attempts to detect new tunnels on the Gaza border. During these attempts, the Israeli military vehicles will pass several kilometers inside the Gaza border, which may provoke the Palestinians into a military escalation. In this regard, the resistance should abstain from responding to Israeli field movements. Also, Liberman’s appointment may speed up the turning of the Abu Mazen page by exploiting the regional activity and taking advantage of Liberman's preoccupation with the US presidential elections. Any escalation on the part of Liberman against Gaza will intensify should Israel be cornered by US and European pressure to return to the negotiations with the Palestinians.”

Imad Abu Awwad, a Palestinian researcher in Israeli affairs, told Al-Monitor, “Liberman’s options regarding Palestinians are limited to two scenarios: first, launching a blitzkrieg following the assassination of influential Palestinian figures. Such assassinations would lead to a war succeeded by a long period of appeasement with Gaza. Second, Liberman will drag Israel into a broad confrontation with Gaza in a bid to deal a fatal blow to the resistance and significantly abolish its advanced capabilities without risking wild incursions that pose a serious threat to the [Israeli] soldiers. [Liberman] will settle for airstrikes, which may not be able to settle the war in Israel's favor but can push the Palestinians toward a certain settlement as far as Gaza’s future is concerned.”