Journalists in Iraq are divided on why press freedom is restricted in the country, as some say that some reporters bring death threats on themselves by fabricating reports. 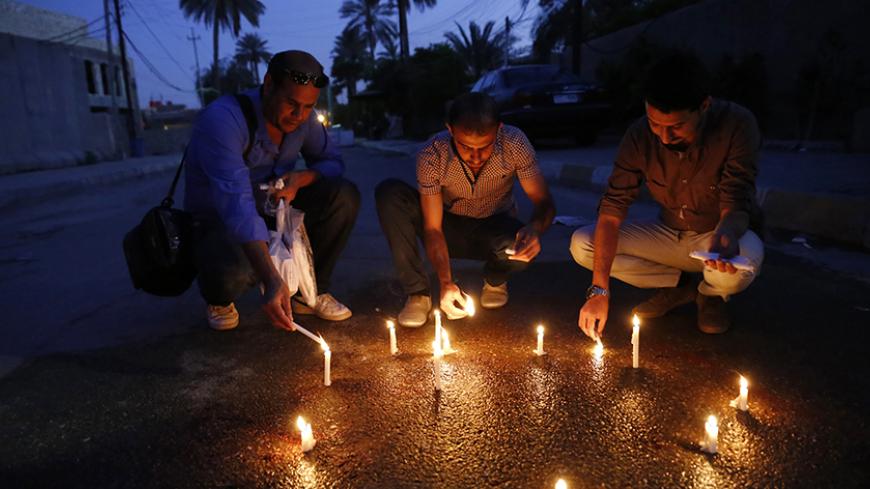 BAGHDAD — To what extent can members of the media confidently say that freedom of the press in Iraq exists with so many threats made — and carried out — against journalists? These threats are well-documented and originate from many sources.

On Feb. 4, journalist Hadi al-Anbak accused businessman Salem Abdel Ayman Zaher of threatening to kill him because the reporter exposed alleged corruption in agricultural land investment projects in which Zaher is involved.

On May 20, 2015, Egypt Today reported that Kirkuk-based journalist Mohammad Mowaffaq told authorities he had received death threats, and unknown armed men had stopped him in his car and threatened to cut out his tongue if he didn't quit journalism. The threats followed his investigative report on illegal arms trade.

On April 15, 2015, the Iraq Journalists Syndicate (IJS) reported TV journalist Ahmad al-Jassem was threatened, assaulted and detained for hours by some members of security forces in Babil province, south of Baghdad. He had recently reported on the lack of services in the country.

On April 11, 2015, Reuters reported its bureau chief in Baghdad was threatened on Facebook and was also criticized by an Iraqi TV channel because of his April 4 report on unlawful executions and looting in Tikrit by the Popular Mobilization Units fighting alongside the Iraqi army against the Islamic State. The reporter left the country because of the threats.

Also threatening the role of the press in Iraq are political pressures and — as in many other places — economic concerns. Many newspapers have closed and journalists have been laid off. Azzaman newspaper, which is printed in both London and Baghdad and which used to have 80 employees, cut staff in Iraq in May 2015 and was left with only 10 employees because of austerity policies and reduction of expenses.

On Jan. 24, the Journalistic Freedoms Observatory warned against the “uncertain future threatening the Iraqi media institutions given the lack of funding and austerity measures,” against the backdrop of falling oil prices, which represent the main revenue source for the Iraqi economy.

Reporter Naim al-Shanoun, who works at Maalomah news agency, told Al-Monitor that Iraqi journalists’ lives and livelihoods are threatened. “Some media institutions threaten to sack journalists should they publish reports or voice opinions against their institutions’ policies,” he said.

Shanoun refused to identify colleagues who have been subjected to such threats, to keep them from getting fired.

The IJS confirmed Feb. 2 that dozens of employees at newspapers, radio stations, satellite channels and news agencies have been laid off because of the financial crisis plaguing the country.

Abdel Khaliq Imran, a judge in the Labor Court in Baghdad, told the media that the court has overturned administrative orders to expel journalists from work, calling upon those affected to file lawsuits before the court to be compensated by the institutions that have dispensed with their services.

Iraqi journalists live with uncertainty, never knowing when threats to their lives and livelihoods might be carried out. Dozens of journalists in Iraq, such as Atwar Bahjat and Ali Amjad Hamid, have been killed since 2003.

Politician and academic Laith Shubbar told Al-Monitor, “Political parties control media outlets and use them to disseminate their views and policies. Thus, journalists who work for such institutions have to be loyal to these political parties. Meanwhile, independent journalists face a difficult time finding work and therefore they are currently living in a state of destitution and poverty.”

Saleh Sayed Baqar, a writer and journalist at Alam satellite channel, told Al-Monitor that some journalists are responsible for what is happening to them. “Some of them go as far as to publish fabricated and incorrect information, looking for a scoop. When they are legally prosecuted, they claim via social media that they have been restricted to practice their press freedom and are repressed,” he said.

Interviews Al-Monitor has conducted make it clear that writers and journalists are divided about the extent of their press freedoms and the harassments they face in Iraq.

Reporter and political analyst Kamel al-Kanani told Al-Monitor that, in his experience, "in Iraq, there is a free and open media platform."

He added, “I own a satirical column where I deride so many political figures and call for change, and I have never been threatened."

Qasim Mozan, a journalist at Al-Sabah newspaper, shares Kanani's opinion. “The Iraqi Constitution explicitly guarantees freedom of the press and there are no prisoners of conscience. Some newspapers have shut down because of lack of funding, given the financial crisis. This is not to mention that the ISJ proposed a law on the protection of journalists [later ratified by parliament] and those who have been harmed could resort to it,” he said.

Conversely, writer Makki al-Rabih told Al-Monitor, “Iraqi political parties dominate the media and put it at the service of their interests. Independent journalists are persecuted.”

Similarly to Rabih, political analyst Jassim al-Moussawi said, “Iraqi politicians do not respect different opinions and are still following the authoritarian approach of the pre-2003 political regime in terms of restrictions on media freedoms.”

University professor and writer Mohsin Ali Atiyeh drew a distinction between the idealism of the constitution and reality. “While the Iraqi Constitution stresses the right of expression, reality shows that this freedom is restricted. Some activists on Facebook are being tried and prosecuted,” he told Al-Monitor.