Iran parliament seeks damages for US support of Saddam

Iranian parliament passes bill to seek American assets for US actions taken against Iran in the past 63 years. 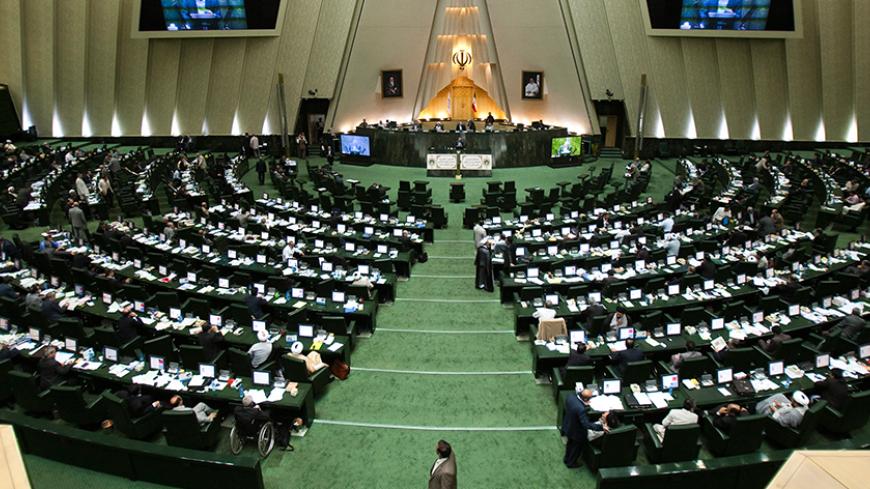 After the US Supreme Court upheld legislation that allows American courts to confiscate Iranian assets in the United States, the Iranian parliament passed a bill that forces the administration to seek compensation from the United States for US actions taken against Iran in the past 63 years.

In an open session May 15, the parliament passed the double emergency bill with 181 votes in favor, six votes opposed and eight abstentions. According to Mehr News Agency, some members of parliament chanted "Death to America" during the vote.

Ibrahim Karkhaneh, the head of Iranian parliament's Nuclear Committee, presented the bill and said that the court cases against Iran in the United States were examples of "unjust actions to seize property and assets of the Islamic Republic of Iran." Blaming officials from President Hassan Rouhani’s administration, Karkhaneh added, "The Islamic Republic of Iran until now has not taken significant action against these unjust actions, and day by day these sentences in America are increasing."

According to the bill, the US actions for which Iran would seek compensation are: US involvement in the 1953 coup that overthrew Prime Minister Mohammad Mossadegh and reinstalled Mohammad Reza Pahlavi as king of Iran; a coup attempt known as the Nojeh coup in 1980 shortly after the Islamic Republic was established; US support for Iraqi President Saddam Hussein during the Iran-Iraq War, including the 223,000 victims and 600,000 injured during that war; the deaths of 17,000 Iranian citizens at the hands of US-backed terror groups; spying against Iran; confiscating Iranian assets; and US support for Israel.

The bill requires the administration to take "appropriate legal action" against the US violation of state immunity and to take countermeasures against US assets in third countries. The bill requires the Foreign Ministry to present a report to parliament's National Security and Foreign Policy Commission every six months.

The bill is in response to an April ruling by the US Supreme Court that families of victims of the 1983 Beirut bombing of US Marine barracks and other bombings were entitled to compensation from $2 billion of Iranian funds in US banks. In 2012, the US Congress passed a bill allowing 1,000 families access to the funds after they had won a 2007 lawsuit against Iran in a US court. In March, a New York court also held Iran responsible for the Sept. 11 terrorist attacks, awarding the victims $10 billion.

In response to the US Supreme Court ruling on the Beirut attack and the New York court ruling regarding 9/11, Karkhaneh said, "After the nuclear deal, we see that the United States issues verdicts against Iran with baseless and false excuses." He called the rulings "a cooperation between the American Congress, the government and courts to steal Iranian property."

On May 16, a special working group formed at the order of Rouhani and headed by Minister of Economic Affairs and Finance Ali Teyebnia to "review the various dimensions of the robbery of Iranian property by the American government" issued a statement saying "America's judicial system violated the principle of state immunity." The statement blamed the administration of former President Mahmoud Ahmadinejad for not withdrawing the money from the United States "despite numerous warnings."

The statement continued that in consideration of the studies conducted by the group, and because the issue is not only a legal, political or banking question but also a question of national security, that further studies and decisions be made by the Rouhani administration and the Supreme National Security Council.