Iran's defense minister said that Israel is holding prisoner the four Iranians who were kidnapped in Lebanon in 1982. 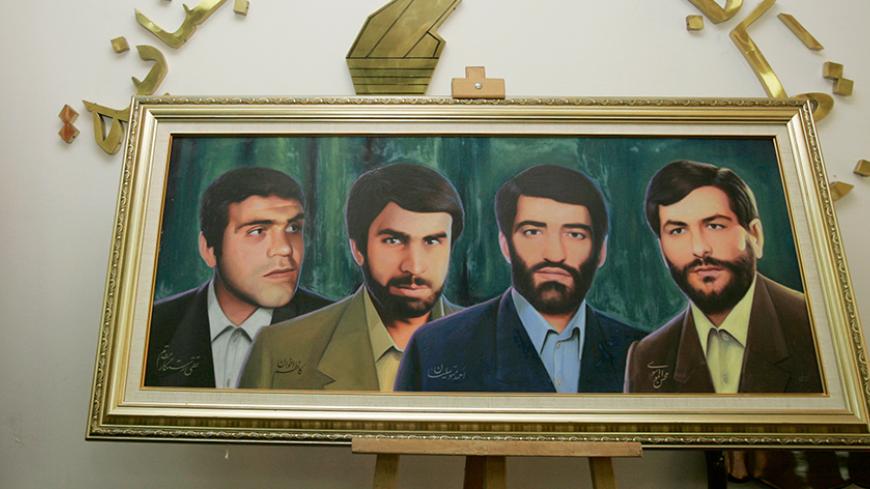 A picture depicting the four Iranian diplomats who were kidnapped in Lebanon in 1982 is seen during a news conference in Beirut, July 3, 2008. - REUTERS/Sharif Karim
Arash Karami
@@thekarami
May 25, 2016

Iran's Defense Minister Brig. Gen. Hossein Dehghan surprised many Iranians when he said that the four Iranians kidnapped in Lebanon in 1982 were still alive and being held in an Israeli prison.

Ahmad Motevaselian, military attache for Iran’s embassy in Beirut; Seyed Mohsen Mousavi, charge d'affaires at the embassy; Taghi Rastegar Moghadam, an embassy employee; and Kazem Akhavan, a photographer for an Iranian news agency were kidnapped by a Christian militia when their vehicle passed through a checkpoint in the village of Borbara on July 5, 1982.

Of the four Iranians, Motevaselian was the most popular figure because of his role in the liberation of the city of Khorramshahr as commander of the 27th Mohammad Rasoul-Allah Brigade during the Iran-Iraq War. Iraqi forces had invaded Khorramshahr in 1980 at the order of Iraqi President Saddam Hussein. Despite suffering heavy casualties, Iranian forces were able to take back the city after 575 days and expel Iraqi troops in Operation Beit ol-Moghaddas. The joint army and Islamic Revolutionary Guard Corps battle was a turning point in the war and etched in the minds of Iranians that, despite being outgunned and internationally isolated, they could defeat the Iraqi army.

The Iran-Iraq War would last six more years, though Motevaselian would not stay in Iran. After Israel invaded southern Lebanon in 1982, Motevaselian traveled to Lebanon in order to lead forces fighting against the Israeli occupation. He disappeared one month later.

In 1988, Samir Geagea, Lebanese politician and former commander of a Christian militia during the Lebanese civil war, accused his predecessor Eli Hobeika of taking the Iranians hostage for interrogation. In other reports by Iranian media, Geagea was quoted as saying that the Iranians were later killed. In 2009, Hassan Nasrallah, secretary-general of Hezbollah, said "there are signs the Iranian diplomats are in an [Israeli] jail." He rejected claims by Israel that the Iranians were killed and buried by Phalangists. Nasrallah said that on other occasions Israel has denied holding prisoners that later turned out to be false.

Dehghan's comments sparked the hashtag #freemotevaselian among Iranian social media users. Tabnak News agency wrote that the hashtag must be viewed with the understanding that Iranians from various sides and beliefs remember the Iran-Iraq War, which is often referred to as the "Sacred Defense," as an "epic historical" moment. They feel close to the brave men who fought in the war. Many shared pictures of Motevaselian from different parts of his life, particularly on the war front. Iranian websites republished short profiles and pictures of his life. Motevaselian is such a popular figure that Mohammad Nahavandian, chief of staff to President Hassan Rouhani, visited ​Motevaselian's mother in the hospital to pay his respects May 24.

The re-emergence of Motevaselian in Iranian headlines was not without partisan hostility. Many hard-line websites took the opportunity to attack Ayatollah Ali Akbar Hashemi Rafsanjani, who was commander of the army when Motevaselian disappeared. According to Iran's ambassador in Beirut at the time, Musa Fakhr-Rouhani, Rafsanjani passed on the opportunity to trade David Dodge, acting president of the American University of Beirut, for Motevaselian and other kidnapped Iranians.

Dodge was taken hostage in 1982 by pro-Iran militias and later moved to Tehran. Fakhr-Rouhani claimed that Dodge was the head of the Central Intelligence Agency in the Middle East. One year later, with Syria's intervention, Dodge was released and left for the United States. Afsaran, a website dedicated to combatting what Iran views as the soft cultural war against the country, wrote that Rafsanjani on 13 occasions could have traded for Motevaselian but did not. According to a 1988 New York Times article, Rafsanjani had told the United States that Iran would help with the release of Americans if they would help with the release of Iranians held by Lebanese Phalangists.