Iranian authorities are weighing whether to launch a free financial center to encourage capital inflow into the economy. 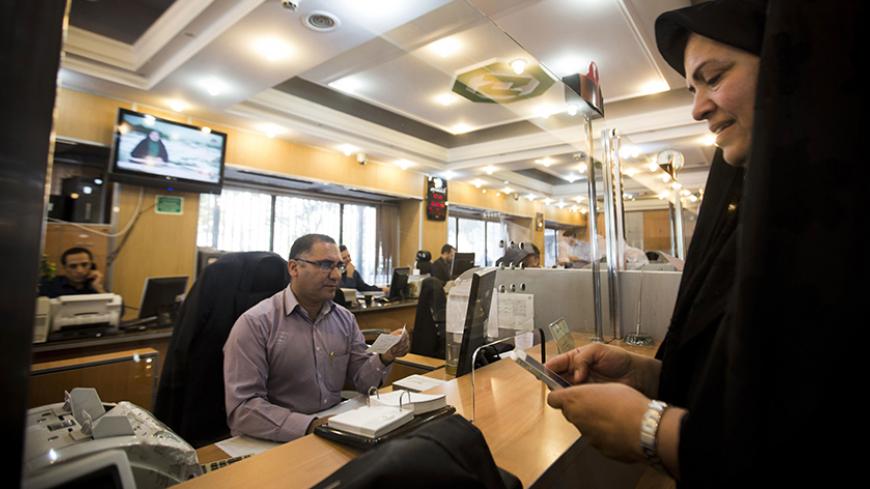 An Iranian woman waits for a bank clerk to process her request in Tehran, July 27, 2015. Iran's Central Bank chief said that Iran has assets of $29 billion in overseas banks that would be unlocked under the nuclear deal. - BEHROUZ MEHRI/AFP/Getty Images

TEHRAN, Iran — Iranian authorities are weighing whether to launch a free financial center, most probably in one of the country’s free trade zones, to encourage capital inflow into the economy.

“Planning is underway to turn free trade zones into foreign investment hubs through the opening of branch offices for Tehran’s equity and bond markets, setting up offshore banks and establishing a free financial center,” said Akbar Torkan, secretary of the Supreme Council of Iran’s Free Trade, Industrial and Special Economic Zones, in March at a meeting with Expediency Council leader Ali Akbar Hashemi Rafsanjani on the Persian Gulf island of Kish.

Torkan’s comments came days after he reached an agreement with the Securities and Exchange Organization, Iran's capital market regulator, to launch the financial center. Of note, he had said in November that the Kish free trade zone would be a suitable place to set up such a center.

Torkan, who is also an adviser to President Hassan Rouhani, argues that multinational banks would face lower risk if they operated on the island, noting that they would have time to assess the situation before making a final decision about investing in the mainland. Many senior Iranian economic officials appear to be in agreement with his thinking.

Central Bank Governor Valiollah Seif, whose support is key to the project’s success, appears to back the initiative, despite disagreements with Torkan over the launch of offshore banks in free trade zones, the news website Tabnak reported April 4. While there has been no direct word from Seif, in August the Iranian Free Trade and Special Economic Zones News Agency (Freena) had quoted Ali Asghar Mounesan, CEO of the Kish Free Zone Organization, as saying that Seif had agreed with the establishment of the financial center on Kish.

There has been no word from any official about how the center would work under current laws and regulations, which have made the investment climate less friendly compared to other regional markets, even after the lifting of nuclear-related sanctions in mid-January. In other words, it is not yet clear what advantages the new financial center would offer to attract foreign investment that would trump existing rules and regulations.

For instance, the Abu Dhabi Global Market (ADGM), the second financial zone established in the United Arab Emirates, the Dubai International Financial Center (DIFC) being the first, offers attractive incentives to investors to act as a catalyst for the growth of the Emirati financial services sector. According to a report released by the Oxford Business Group, a British firm with an office in Dubai that provides intelligence on emerging economies, “Companies established within ADGM can be 100% owned by non-UAE nationals, as opposed to the 49% limit that is currently applied in the emirate; a 50-year tax exemption will be granted on the profits of companies and their employees arising out of their activities in the zone; and customs duty exemption will also be offered to licensed businesses.” The question is what the Iranian government is planning to offer in this vein as incentives to potential investors.

Ahmad Azizi, a senior adviser to the Central Bank governor, says there must be a “meaningful difference” between the rules applied in the mainland and those in free financial centers. Otherwise, why should Iran spend a lot of energy and time on establishing a center?

Azizi argued in an April interview with Tejarat-e Farda that due to Iranian financial regulations’ noncompliance with international and professional standards, the establishment of a free financial zone would have no justification whatsoever. Rather, Azizi argued, such a center might impose extra costs on the national economy at a sensitive time, with the Joint Comprehensive Plan of Action having recently been implemented.

In other remarks, Azizi additionally questioned the call for establishing a free financial center on Kish Island, claiming that it would be hard for officials to have access to professional human resources and entities. He also criticized those authorities comparing the DIFC with a similar center in Iran, noting that regulations in Dubai are much less strict. He wondered whether stringent laws in Iran would allow changes in regulations to make them compatible with international rules. Furthermore, he outright warned that if policy instruments are not used properly in any free financial center, the whole system would collapse in the medium term, making markets extremely unstable.

This warning shows that the launching of a free financial center needs robust, research-oriented planning, foreign consultation, new legislation and supervisory enactment of new rules and procedures. The latter is of great significance, since money laundering and other illegal financial dealings could cost the economy billions of dollars in the absence of well-developed regulations.

Regardless of how the Iranian government prepares to face the challenges of launching a free financial center, efforts to promote the growth of the financial services industry would appear to be essential given the less-than-stellar banking situation in the country. Iran expects aggressive investment, as much as $50 billion per annum, for the next decade. Some experts believe the best way to diversify sources of financing is first to call on Iranian expatriates to move their capital from neighboring markets, namely Dubai and Turkey, to their homeland. Before any decision is made in this regard, however, the Iranian government must assure potential investors that risks arising from activities in a free financial center will be properly managed.